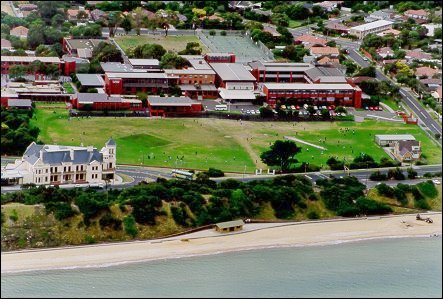 The De La Salle Brothers founded St. Bede’s in 1938 in response to the need for a Catholic College perceived at the time. At St.Patrick’s, Mentone, the parish priest, Father Adrian Martin, had lobbied many teaching orders within the church to establish a secondary boys’ college. He saw his parishioners sending sons to inner city colleges, or leaving school altogether without a proper education.

At the time the religious climate was much different to the more ecumenical times of today. Catholics were instructed by the bishops to send their children to their own schools and preserve the faith. Some Catholics went to State High Schools but most wanted to obey the church demands.

Father Martin persuaded the De La Salle Order to buy the old McCristal property and several adjoining ones so St. Bede’s was born. It helped that the Brothers wanted to move their boarders from a crowded campus at Malvern. St. Bede’s was a boarding school from the start.

The college opened in 1938 with eight teaching Brothers and by year’s end about 110 students. After ten years the student rolls reached 300 but the Brothers were still below ten in number. Despite the addition of a couple of secular teachers the class sizes began to rise. Boarder numbers grew rapidly in wartime when families were dislocated. St. Bede’s had about 100 boarders every year from the early 1940’s until the 1970’s.

St. Bede’s was a success despite the scattered collection of old and temporary buildings it occupied. War restrictions and cash shortages kept physical conditions primitive. 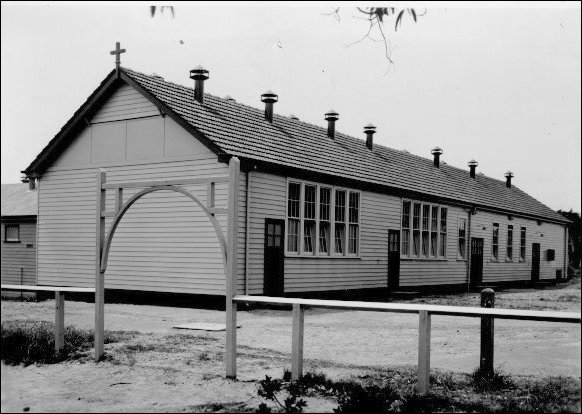 Wooden classrooms constructed in 1944 and demolished in 1970.

Sport provided the school with its early successes, especially in athletics where it won a Catholic Colleges Division 2 premiership in 1944. A senior football flag, won against Melbourne’s big Catholic Colleges, caused much jubilation in 1953. The first senior cricket premiership came in 1958. Two ovals, tennis courts, handball courts and the spacious old Davies property gave boys plenty of space to expend energy so St. Bede’s did well at sport.

The 1950’s saw the baby boomers hit the school and the enrolment double to over 800 in five years. Brother Finian was Headmaster in a period of acute difficulties. Facilities were hopelessly inadequate and class sizes rocketed to over fifty in many grades. Brother Alban, a dynamic business-oriented man, bullied parents, bankers and anyone with some clout, to build a complex of classrooms and other facilities in a period of financial stringency. It opened in 1958 and from then on St. Bede’s has had regular additions to its red brick campus. The main builders were Brother Colman (1960’s), Brother Peter ( 1970’s), Brother William ( 1980’s) and Brother Quentin (1990’s).

After the boom of the 1950’s the roll call reached 1000 in the early 1960’s and crept upwards over the years so that it has been over 1300 for nearly two decades as the century comes to an end. 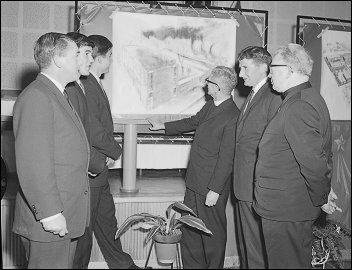 Once staffed entirely by Brothers, the College now has over 100 staff, all but a few being secular. The Brothers numbers are not much different to the 1938 figures and about half of them are now retired. The female staff numbers are pushing towards 50% and most executive positions, apart from that of Headmaster, are in lay people’s hands.

St. Bede’s has never restricted entry to students on the basis of academic performance. It draws pupils from the local area with preference given to Catholic primary graduates nearest to the College. Given its non-selective nature its academic results have been creditable over the years.

Some have argued for a more restrictive entry but the De La Salle Brothers have stuck to their founder’s ideal for over 300 years. The Order was set up to teach the poor in a 17th century France when the nobility treated the lower classes with contempt. St. Bede’s exists in a totally different world but its guiding philosophy still rejects social exclusiveness.

Many of the College graduates went into professions and there have been some fine people among them. Two of the best are Professor Ron McCallum of Sydney University, a specialist in industrial law, and Shane Marshall, a judge in the Industrial Court.

In the sporting world St. Bede’s has produced several Olympians, perhaps the most notable being Peter Fitzgerald a semi-finalist in the 200 metres at the 1976 Montreal Games. There have also been Gerard Healy, Brownlow Medallist, 1987, and Sean Graf who represented Australia at one day cricket in the 1980’s. Thousands of other graduates have made a contribution to our society.

For its first 25 years St. Bede’s, though not as repressive as some other private schools of that time, pushed religious doctrine and observance very strictly, and it also used strong methods to enforce discipline, including corporal punishment. Things are different now. Discipline is softer, relying on a co-operative approach, and the religious education is certainly less pervasive though the school maintains a Christian ethos which influences policy.

From a standard curriculum of the early years, when public examinations dominated a fairly narrow academic range of subjects, the College now runs a broad spread of studies including trade and technology courses, once the preserve of Tech. Schools.

The buildings which St. Bede’s occupied in its first twenty years are now all gone and the nature of the College has also undergone a massive change during its first 60 years.