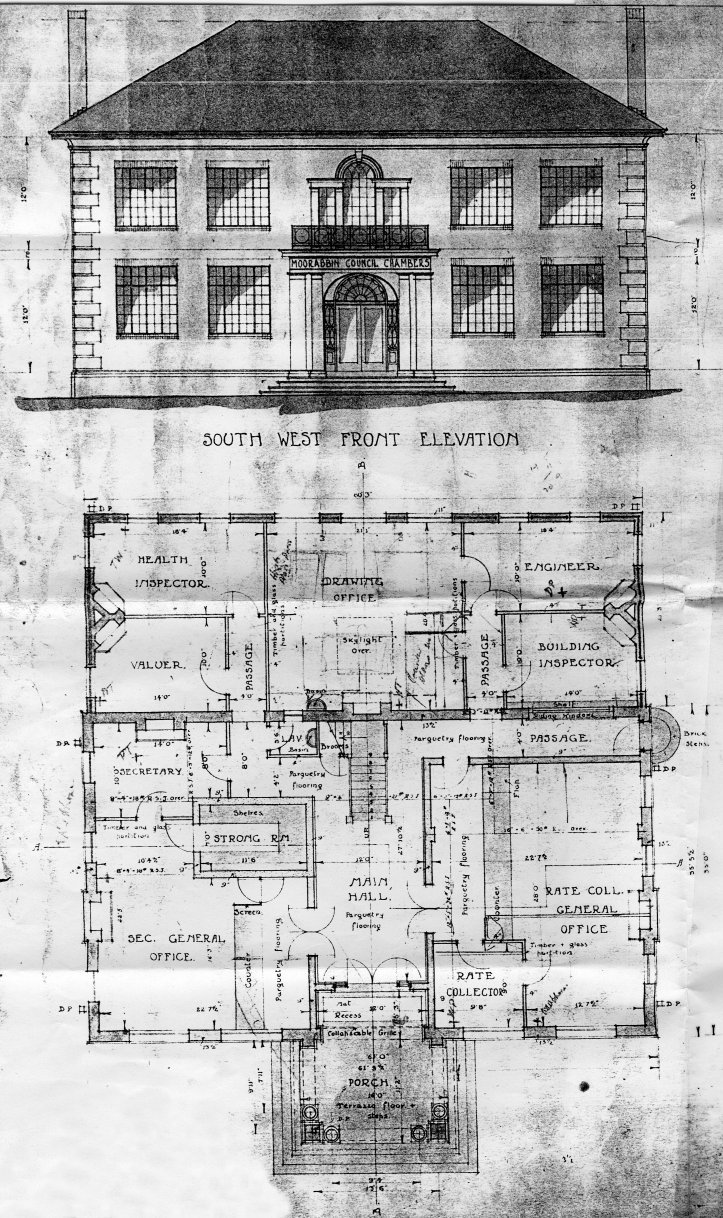 During the 1920s councillors of the Shire of Moorabbin had been talking for over three years about the need to improve the accommodation of council officers but it was in 1928 that the matter was finally resolved. The accommodation that was available prior to this time was hopelessly cramped. To help relieve the situation officers had been using the council chamber during the day to complete their administrative duties. At a special meeting of council it was resolved to construct a new building to be used for council meetings and offices and make use of the existing building as the Baby Health Centre.

The engineer was directed to prepare a rough plan of the new building for presentation to the architects, Jenkin and Goldsmith of Queen Street, Melbourne. They designed a building in the Georgian style that was meant to provide housing for staff for many years in the future. The walls were to be in soft blended tones of blue, brown and red brick with the roof clad in blended chocolate tiles. Relief to these tones was to be provided by a white cement porch with a Palladian motive above it and a frieze.

A newspaper report provided the following details, “… the porch, floored with a decorative pattern, in terrazzo, and the roof being protected by a wrought iron balustrade, forms an open balcony accessible from the council chamber. The port gives access, through glass doors, to a spacious main hall, on either side of which folding glass doors lead to the departments of the shire secretary and the rate collector. At the further end of the hall, corridors lead on one side to the health inspector and valuer, and on the other to the engineer and building surveyor.” [1]

“From the main hall, a broad flight of stars leads to the first floor where are grouped round the landing the council chamber, committee room, mayor’s room, and councillors’ cloak and toilet room. Ample light to all parts of the interior is ensured by the free use of large windows, glass doors, and in many cases, glazed internal partitions. The main hall, corridors and public spaces are floored with Australian oak parquetry. The main hall and council chamber are panelled in Australian oak.”

Excavations for the new building started in October 1928 and in December the official laying of the foundation stone took place. Cr Clements, the chairman of the meeting, welcomed a clutch of politicians, representatives from neighbouring councils, several former councillors of the Shire of Moorabbin, colleagues and other guests. There was some lighthearted banter which also had a hidden bite. Cr Clements in welcoming Mr Chandler, who had recently taken up the position of Minister for Public Works, expressed the hope that Moorabbin would now receive some back pay for which they had been waiting for, for so long.

Several former councillors of the Moorabbin Shire spoke of their experiences as councillors. Frank Scudds recalled heated debates in the council chamber but believed the participants parted good friends. He particularly referred to the time when portions of the shire broke away as “bitter times as far as he was concerned.” David White agreed saying he believed the separation of Sandringham and Mordialloc was foolish. While good roads and improvements are all right they are based upon borrowed money and that is a concern. George Brownfield recalled that he had fought hard against the erection of the present hall and warned current councillors that they should not let the municipality go ahead too fast. [2]

Many of the guests present at the laying of the foundation stone returned for the official opening of the new shire hall in October 1929. Cr Clements was again chairman and director of ceremonies. He took the opportunity to review the history of the shire commencing with the creation of the Moorabbin district in 1862. During his speech he drew attention to the contribution of Sir Thomas Bent, “the father of the district” and a man always ready to help the “under dog.” Before declaring the building open the president of the shire, Cr Castle, quoted figures to demonstrate the progress of the district over the last few years.

He then expressed the wish that the building would serve the municipality for many years. [3]

Following the opening of the new building efforts were made to ‘beautify’ the surrounding environment. A concrete footpath was constructed from South Road to the railway entrance and a lawn of buffalo grass planted. Plans were also made to install seven Phoenix palms. These improvements were welcomed but a correspondent of the local newspaper reminded the councillors that “it is generally the halfpenny’s worth of tar that spoils the ship” and pointed to the existence of an unsightly horse trough that should be replaced. He suggested the current trough should be replaced with an elegant one together with a drinking fountain constructed in cement. But the design should be in keeping with the architecture of the new building. He believed it need not be expensive as it could be designed by members of the engineering staff. [4] 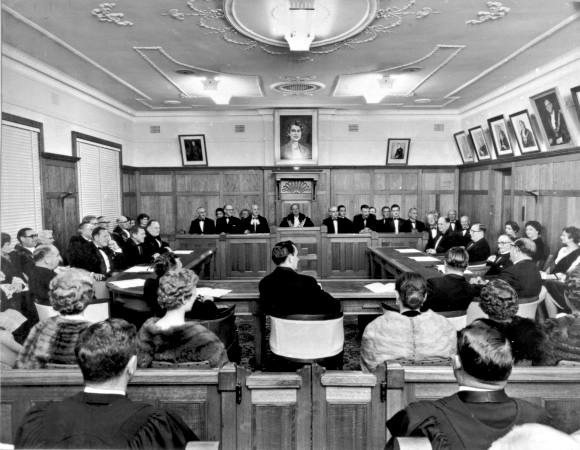 The new shire chamber was to serve the municipality and council staff for many years before complaints of lack of appropriate working space for council officers were raised making the issue once again the focus of long and exhausting debates. In 1988 a new administrative building was erected further along Nepean Highway so the future of the 1930s building came up for discussion. One suggestion was that the building should be demolished as the cost of an ‘up grade’ of a structure what was described as an outmoded was prohibitively high being estimated to be $2 million. [5] This idea of demolition was not implemented and later the building was renamed and renovated to become a centre for the performing and visual arts. Today the building includes a theatre, exhibition space, and workshop rooms and is seen to be “the cultural gateway to the City of Kingston.” [6]