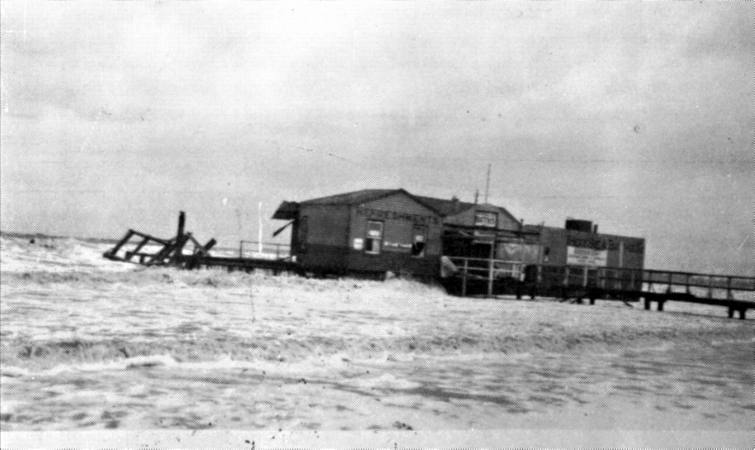 At the beginning of the twentieth century bathing in Port Phillip Bay was not a straightforward matter. Regulations set the parameters for the clothing that needed to be worn on the beach and where people could actually swim. Local councils built baths where men and women, at separate times, could bathe in the sea with relative safety from marauding sharks, or partake of a hot sea bath. By 1893 the Shire of Moorabbin had responsibility for baths at Mentone, Mordialloc and Sandringham. [1] and set the regulations regarding their management. Dogs were not allowed within the precincts of the baths, smoking was only permitted in areas set apart for this purpose, the baths were open daily from daylight until dark and separate times were set aside for the bathing of men and women. The flying of a red flag denoted the presence of men while a white flag warned people that women occupied the baths. Moreover, by-law No 18 stated that bathing within forty chains or half a mile of any baths was prohibited for any person above the age of 12 years between the hours of seven o’clock in the morning and eight o’clock at night.

It was in 1886 that William Coleman wrote to the Moorabbin Shire Council enquiring whether they were prepared to erect baths at Mordialloc. A public meeting had appointed Coleman to act on their behalf in making this inquiry. [2] The council reacted favourably to the request and ordered that plans be prepared for the creation of the Mordialloc Baths. [3] By December of that year the building contractor was able to report good progress although the weather had been boisterous and stormy. [4]

Mr Comport was the first lessee of the baths but by 1894, finding it difficult to pay the rent, he sought the council’s permission to surrender the lease. Permission was granted. Joseph Organ took up the lease which was renewed in June 1895 for five years provided he made some improvements to the property. [5] Mr Organ again won the tender to lease the Mordialloc baths for three years in 1905 at a rent of £50 per annum and this was renewed in 1909 for a further three years but with a yearly rental of £90. [6]

A report in 1906 published in the local newspaper described the baths as having a neat entrance with Mr Organ’s “home on the rolling surf” being fitted up in a comfortable and compact manner. It was reported that Mr Organ took great pride in the appearance of the baths and did everything to ensure the comfort and safety of his patrons. [7] Over a period of ten years there had only been one drowning, that of a young girl who had walked out of her depth, and this was at a time when in the course of an ordinary summer season 15,000 to 20,000 people took advantage of the baths facilities.

By 1925 the condition of the baths had seriously deteriorated. The Town Engineer, F A Jenkins, reported to council that the Mordialloc Baths were in a very poor condition. Very little had been done in the way of repairs for a very long time so there was much to do. A shark proof fence needed to be constructed, additional dressing accommodation was required, the outside appearance needed to be improved in order to attract business, and provision needed to be made for hot sea baths as this was an area of revenue production. These repairs together with some general minor repairs were estimated to cost £1680, an amount of money few of the councillors were prepared to commit. Cr Blanche did not believe the people wanted the baths but Cr White thought some money should be spent on them; although he appreciated they were never a paying proposition. [8]

At a special meeting of council, Cr Ryan was successful in convincing his colleagues that money should be spent on the baths and before the meeting closed the expenditure had practically been authorised. [9] Cr Ryan pointed out that Mordialloc had thousands of visitors and a large proportion of these arrived without bathing costumes so they relied on the baths as a place to hire them. In addition, there were elderly people who refrained from bathing in the open, preferring the safety and relative privacy of the baths

The members of the Mordialloc Progress Association did not appreciate this outcome. For them a proposal to spend £1700 on a “useless object” was an incredible decision particularly as streets were in such a neglected condition. One member of the association said baths were a dead letter and all municipalities were recognising that fact. To repair them was like throwing money into the sea, he said. [10]

A strongly worded letter from the Association read at the council meeting requested the council to stay its hand regarding the baths until it heard from a deputation. Cr Blanche moved that the request of the Association be acceded to and he had the support of a sufficient number of colleagues for the motion to be accepted. Cr White spoke in opposition to the motion. He said the baths were an eyesore in contrast to the baths at Mentone and something needed to be done about them. Moreover, he made it clear he did not hold the opinions expressed by the Progress Association in great respect. [11]

In the following issue of the Moorabbin News, the president of the Progress Association, Hiram Phillips, in a long letter responded to Cr White’s comments suggesting the councillor was out of touch with the group’s activities. The baths had not proved to be a good financial proposition to the lessees, or otherwise, Phillips suggested, they would have realised a rent sufficient to keep them in good repair. [12] Cr White in an even longer response expressed surprise that “a few simple remarks” could generate such “tremendous heat”. He claimed he was only defending the council against the charge of “unwarranted expenditure”. He pointed out that public baths are constructed and built at the cost of the municipality and were not expected to return a profit. “They are brought into existence for public convenience and so long as they serve this propose for a great number of people their object is achieved,” he wrote. [13]

The deputation of three men from the Progress Association attended a meeting of council and presented their reasons for opposing expenditure on the baths. Mr Phillips said if the finances of the town were in a flourishing condition and all necessary works had been carried out there would be no complaints. But this was not the case. The baths, he said, were out of date and had never been a good proposition. In his view the council should be making roads and footpaths before catering for outsiders. Mr Nicholson stated he had known the baths for thirty years and they had always been a failure. Most people, he said, used the open sea. Mr Syle pleaded with the council to do more urgent work. [14]

Cr White, reiterating some of the earlier arguments why the expenditure on the baths should proceed, moved a motion that “provided the Foreshore Committee was in favour of the money being spent, the Council consents to the work proceeding.” His colleague, Cr Ryan, seconded the motion and after some discussion it was approved. Cr Blanche maintained his opposition suggesting the Foreshore Committee should be thoroughly satisfied the baths could be reasonably expected to withstand any storm that might occur and that the piles were not rotten and decaying. [15]

The report from the Foreshore Committee was in favour of the Engineer’s recommendations being adopted provided that revenue would be sufficient to meet interest payments and contributions to the sinking fund. Cr Ryan, who reminded colleagues that 600 children used the baths and there was an average demand for fifty hot baths each week, welcomed this result. However, Cr Sibthorpe agreed with Cr Blanche’s position regarding the commissioning of a marine engineer to establish whether the foundations had the strength to support the superstructure. While he said he did not question the ability of the town engineer, Mr Jenkin, he thought it was outside his line of expertise. [16]

The fate of the Mordialloc Baths was probably finally resolved on November 30, 1934 when “one of the worst storm ever experienced in living memory in Victoria” battered the foreshore with huge waves and violent squalls. [17] Mr Callway, the lessee of the Mentone Baths, said the whole floor was heaving beneath his feet, the whole building was shaking with waves bursting through the floor. The Mentone Picture Theatre was surrounded by three feet of water in places causing the evening program to be aborted. The local newspaper reported that £3000 would be required to carry out ‘ordinary’ repairs for the Mordialloc Baths and £1000 for Mentone. The question was asked, “Where is the money coming from?”

In February 23, 1935 the council was informed that their application to the government for a grant towards the cost of repairing the damage to the foreshore had been successful. £1533 was allocated from the unemployment relief fund towards the cost of repairs estimated to cost £2300. Of these amounts thirty-six pounds was allocated to the Mordialloc Baths with £130 going to Mentone Baths clearly indicated that Mentone was of higher priority. The Public Works Committee of the Mordialloc Council reported that the Mordialloc Baths were practically beyond repair and members considered it was time to consider their replacement . One suggestion was that council should grant a long term building lease to a private enterprise to construct a concrete pool. Councillor White said the council should endeavour to see if there was some possibility of financing such a scheme. [18]

The decision was finally made that the Mordialloc Baths should be demolished. Initially it was thought that timber from the baths would provide a suitable caretaker’s residence on the council depot in Collins Street, Mentone, but Mentone Ward councillors discounted this after inspecting the storm battered baths. [19] Finally some of the timber from the demolished building was reused in 1935 in the repairs to the Mentone Baths and the erection of facilities on the foreshore but the notion of building a swimming pool in Mordialloc did not eventuate until the Don Tatnell pool in Warren Road was constructed in 1980.