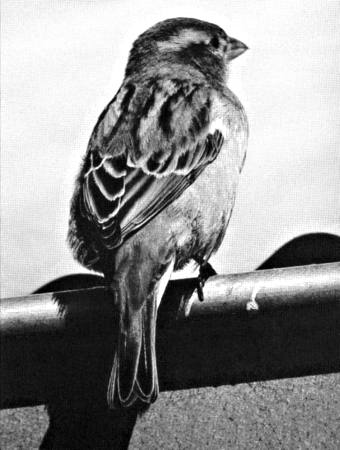 The small finch-like House Sparrow was introduced into Victoria between 1863 – 1870. It quickly made itself at home and just as quickly expanded in numbers to become a major pest. A key reason for the rapid increase in numbers was the sparrows’ ability to feed on a variety of food sources including insects, spiders, seeds and flower buds. With their dramatic increase many local people looked for ways of ridding themselves of these small brown intruders that were committing wholesale destruction of gardens and orchards. [1]

On Saturday November 21,1874, only a few years after the birds had been deliberately introduced, a meeting was held in the Shire Hall of Moorabbin with the object of forming a Sparrow Club, not to protect the birds but to find ways of eliminating them. The attendance was poor it was said because of the inconvenience of the day. Saturday was not a suitable day for market gardeners because that was the day when crops were transported to the market on horse-drawn wagons and sold, as well as being a time for conducting other business. Nevertheless, those that did attend were resolved that immediate attention had to be taken to relieve them of their problem, a problem that was particularly critical for fruit growers.

While there were people present at the meeting who were aware that not all individuals in the community were sympathetic to their plight they wished to press ahead in reducing the number of the destructive pests in gardens and orchards. The formation of a Sparrow Club was seen as a means of doing this. The Heidelberg club was one of several that had been successful. There members paid an entrance fee of 2s 6d and a monthly subscription of 1s. In addition, club rules demanded that each member produce twelve sparrows a month or be fined 1d each for the number deficient. Mr Exley in proposing the formation of a Moorabbin Sparrow Club acknowledged “the idea of killing sparrows would be opposed by people on the grounds of humanity, and the danger of instilling cruelty in the minds and habits of the children.” [2] But those people in opposition to the proposed club, he argued, did not gain their livelihood from either gardens or orchards.

Mr R Clayton was one person present at the meeting who expressed some scepticism about the creation of the club and its proposed objectives. Asking the chairman of the meeting “Who would benefit from the formation of the club?” he was told it was the orchardists, but there were other people who would also reap benefits. Clayton’s response to this answer was that the whole matter was an absurd one. Speakers at the meeting were addressing the issue of the sparrows as if it was of great importance yet Clayton pointed out that scarcely any of the principal orchard proprietors took the trouble to be present. They, he thought, clearly did not think the matter pressing. He questioned the appropriateness of a movement where a few individuals took upon themselves all the trouble and expense while others derived benefits without incurring any loss of time or money.

The meeting concluded after agreeing to form the club and electing a committee with power to co-opt additional members. Mr Exley was appointed as secretary and treasurer. Other members of the committee were R Keys, G Keys, Miller, and Burgess. The task set for the committee was to obtain information from other clubs about rules of operation that could be placed before members at their next meeting scheduled a few weeks away in December.

The December meeting was again poorly attended despite the fact it was a Thursday evening meeting rather than the inconvenient Saturday. However, it was revealed that members of the club had been busy. It was reported that of the sum of £10 5s that had been collected £9 8s 4d had been expended on the purchase of 455 sparrow heads and 3611 eggs. The balance of 16s 8d was not expected to remain for long as head and egg vendors had brought a considerable collection to the meeting. [3]

The Brighton Sparrow Club like its Moorabbin counter-part was not attracting large numbers to its meetings but its committee was pursuing with vigour the goal of exterminating the sparrows. Individuals were paid one shilling per dozen for sparrow heads and six pence per dozen for eggs. Any member of the committee was empowered to purchase heads and eggs which were then handed over to either of two designated members for destruction. The Mayor of Brighton who was chairing the meeting, alerted members to a clause in the new Local Government Act, which authorised councils to employ any person or persons to destroy sparrows and minahs and make regulations for the effectual destruction of such birds. [4] He recommended that the club make an application to the council for £20 to facilitate the destruction of the pests and this they did.

James Exley, the secretary of the Moorabbin Club, wrote to the Moorabbin Council asking for a donation to the club. This was favourably received with Cr Bent proposing and Cr Clayton seconding that £20 be made available to the club. [5] Eighteen years later the council itself was paying a bounty on sparrow heads and eggs. [6] and was advocating to the neighbouring councils of Caulfield, Dandenong , Brighton and Oakleigh that they should be doing the same. [7] However, Moorabbin Council was not prepared to support the petition of the Shire of Borung that Parliament be asked to pass a Bill for the compulsory destruction of sparrows. [8].

A local poet taking inspiration from Robbie Burns wrote the following poem sympathising with the “Orphan Sparrow” that was published in the Brighton Southern Cross. [9]

A wee sparrow sat on a wee wattle tree,
About seven miles south o’ the Yarra,
Chirpin’ sadly, will use yin tak pity on me,
A fither an’ motherless sparrow.

I’m unco supris’d at the Honorable Tam B---t,
MLA, and Lord Mayor o’ the Borough,
Wha wid gravely sit down in the chair and consent,
Tae the death o’ a wee helpless sparrow.

This morning’ my fither an’ mither was shot,
An’ here I sit chirpin’ in sarrow,
Pursued an’ harrass’d by a “larrikin” lot,
That wid torture the life out a sparrow.

A kind hearted Irishman, passin’, says he,
“Now listen to me, boys, er, by garra,
I’l hang every o’ yes up on that tree,
If you’l murther that small little sparrow.

Goodluck to you Pat, for your kindness to me,
Farewel, now I’m off like an arrow,
Far across the wide sea, to the land of the free,
Where they’l shelter a wee outlaw’d sparrow.

Despite the activity of the Sparrow Clubs and councils to eradicate these pests, and the activity of young boys raiding their nests, the small bird continues to inhabit the suburbs cheekily hopping on tables to feast on the crumbs left over from a meal and drinking from bird baths maintained by those who value their presence.