Marching in Mentone for St Patrick

When I was a kid during the early war years I used to hear this resounding beat of a huge bass drum that came from down near the beach at various times and was audible at my house near the Mentone railway station. I wondered what it signified. One day, in 1943 from memory, the booming drumbeat grew very loud and I ran outside to see a marching squad stepping it out along Como Parade East with a band of drummers leading the way. The marching columns were St Bede’s College students practising for the St Patrick’s Day march. I watched the parade as the formation moved briskly along with a couple of Brothers, decked out in black suits and Roman collars, striding alongside, issuing commands and exhorting the boys to keep in step. The lines of students disappeared around Kilbreda and into Mentone Parade on their way back to the college as the drumbeats faded into the distance. Little did I know it then, but I would soon be in step with that beat myself. 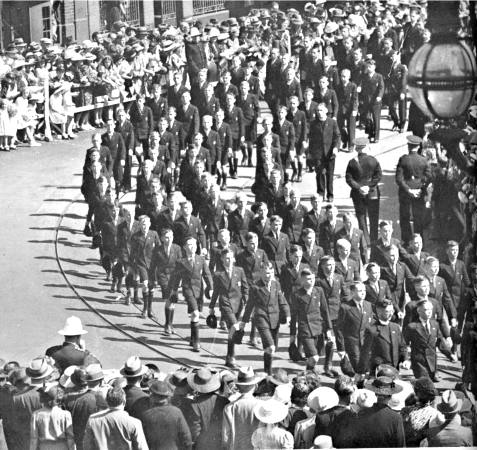 Early in 1946 I was enrolled at St Bede’s and, as February wore on, the Brothers began to organise regular practice sessions in marching. The secondary section of the school, about 200 boys, would be lined up on the college oval with tall students at front and back and the smaller ones in the middle section, three columns in all. Up front there would be several kettle drummers who flanked a bass drum carried by two boys, the rear one using a drumstick to pound out the heavy rhythm. When this band struck up the large squad would hear the command ‘By the left, quick march’ and move out on to Beach Road. Several of the Brothers marched alongside and yelled loudly at us as we proceeded along the bitumen, with the sparse traffic of the period detouring around us. ‘Left, right, left’ and ‘Get in step’ were common commands but there were uncomplimentary shouts at students who were not keeping the lines straight or not swinging their arms. We marched considerable distances, on one occasion reaching the Beaumaris Hotel before turning back towards St Bede’s. During early March the sessions became more regular, several times a week, as St Patrick’s Day approached. 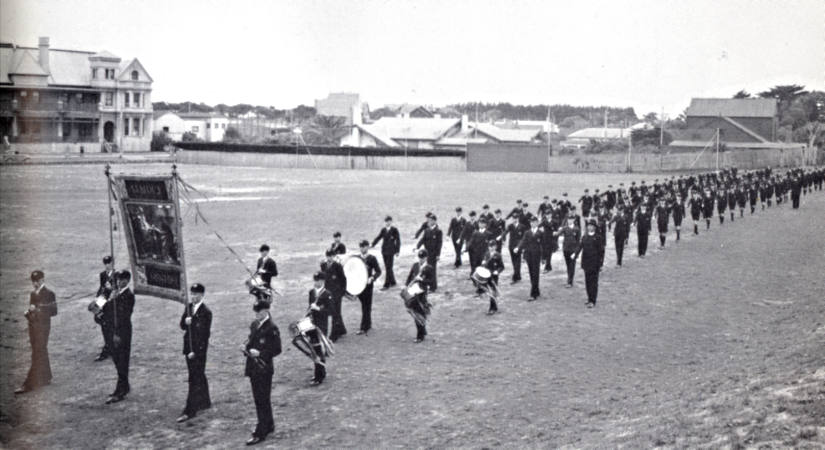 About to leave for the St Patrick’s Day Procession, 1939.

We were being trained to march through Melbourne in the St Patrick’s procession which had been a tradition for decades, certainly since Daniel Mannix had become Catholic Archbishop during World War One. The march took place on the Saturday closest to March 17th and it involved many Catholic secondary schools, as well as a host of other Melbourne Catholic groups, such as the Hibernians and the CYMS. The marchers assembled at the western end of the city, around William Street, and then marched down Bourke Street to do a left wheel near Parliament House where Archbishop Mannix, seated in an open limousine, took the salute. Along the way the crowds clapped and cheered in a proud display of Catholic numerical presence in the Melbourne community. I marched every year through the late forties until 1952 when I left school.

For us at St Bede’s it was a big occasion. The Brothers impressed on us the importance of being the best squad in the march and the fact that we were on show. Any sloppy efforts, in marching or in the way we wore our uniforms, would reflect badly on the school. We lined up on the oval early on those Saturdays and marched up Mentone Parade to the station with the drums belting out that rhythm around the booming bass drum. BOOM! BOOM ! BOOM! The whole of Mentone knew we were on the march.

On several occasions, as we made our way through the main shopping centre, there were moments of drama, as happened when, on one occasion, a baker’s cart horse took fright and reared at the sound of the drums, threatening to gallop into the crowd of shoppers on the footpath. Sensibly, the drums were stopped and order restored. There were times when the blocked traffic, and the disruption of having an uninvited parade on the busiest morning of the week, caused black looks and muffled comments from onlookers, but mostly people were extremely tolerant. On those days we boarded the old red rattlers, alighted at Flinders Street and later formed up for the slog down Bourke Street, often with sweat pouring off us, as it always seemed to be hot on those march days. On many occasions there would be a pipe band, or other drummers, right behind us so that we could hardly hear our own drums. Sometimes all the practice to keep in step had been in vain.

When our squad reached Mannix’s car we received a command to take off our caps and hold them over our hearts as we marched past towards St Patrick’s Cathedral. We did a right turn somewhere near the cathedral and broke ranks in the Fitzroy Gardens where an open-air ceremony, Benediction, took place as the procession concluded. I remember skipping the ceremony and disappearing back into the city with my mates on several of these days. We would find a milk bar, treat ourselves to a Malted Milk or a ‘Spider’ (ice cream whisked in lemonade), and then go to a newsreel theatre for an ‘hour show’. Several of these places showed short features, cartoons, and newsreels in a continuous hour by hour repetition through the day. We thought this was the best part of St Patrick’s Day!

St Patrick’s Day procession was a product of religious division, which often erupted into displays of bigotry. Up until the middle of the 20th century there was not much effort to bring people of the various Christian denominations together, so suspicion and distrust often governed the way people of different beliefs dealt with one another. Irish Catholics brought many grievances with them from the old country and considered themselves to be under-privileged in a country run by Anglicans and Protestants of different types. Members of the non-Catholic majority viewed Catholics with suspicion, particularly as they pledged loyalty to the Pope, a foreign entity. There had been tensions over conscription and support for Australia’s role in World War One, much of it involving Daniel Mannix, an outspoken Irish prelate who had opposed conscription. As a result of tensions like these Catholics had an inferiority complex and tried to prove to the world at large that they were respectable citizens with a rightful place in Australian society. The annual procession was part of this process.

By the 1960s there had been a mellowing of the old religious attitudes and a much more generous movement towards bringing Christians together, especially after Pope John XXIII promoted the Vatican Council to discuss renewal. Education was changing too and educators began to question the energy that went into marching, military style, for hours of school time. When Archbishop Mannix died in 1963 the St Patrick’s Day procession was doomed, and it was immediately discontinued. There had been talk for some years that the event continued only out of respect for the Irish prelate who was in his late nineties. Mentone streets no longer echoed to the booming drums and the displays of the St Bede’s marchers.