Street Train to the Benevolent Asylum

Something had to be done. In the 1880s conditions for the inmates of the Melbourne Benevolent Asylum had deteriorated, with overcrowding in barrack like facilities in a three-storey building that was vermin infested, a fire hazard and difficult to maintain. [1] Several years before, the Secretary of the institution reported that the North Melbourne site was no longer appropriate to house old and feeble inmates because of its close proximity to a crowded city where epidemics were prevalent. He also believed that by moving the institution to a less convenient site the number of individuals requesting admission would fall.

In 1880 a deputation from the committee met with the Premier to request a land grant in Cheltenham for the erection of a new facility and although he was sympathetic, action was slow. The procrastination of the government and the committee ceased in 1904 with the decision to build on the previously identified 154 acres of land on the south corner of what are today Warrigal and Kingston roads. Charles d’Ebro designed the new buildings and tenders were called. [2]

Messrs Wadey & Company’s tender of £77,269 to construct the new Melbourne Benevolent Asylum, two kms from the Cheltenham township was successful. [3] This was a major undertaking which ultimately involved the employment of over 200 men and the movement of 40,000 tons of equipment and supplies during the two-year period of construction.[4] So an early planning problem faced by Wadey was how he was to get this material to the site over a sandy terrain with roads that were poorly formed and unable to bear the constant and heavy-horse drawn traffic traversing over them. The selected solution was to lay a light railway along the roads using horse drawn trucks.

To implement this plan Wadey approached the Moorabbin Shire Council and asked for a permit to lay a line of rails from the Cheltenham station to the Asylum site along Tulip (today Park), Centre Dandenong and Old Moorabbin (Warrigal) roads. Councillors, in general, favoured the proposal although they were concerned about safety and liability. In some places the rails would project above the road surface and if there were accidents the Council would be responsible. Mr Wadey gave certain guarantees; a pilot would go before the trucks, the Council would be indemnified against accidents, the trucks would travel at walking speed, and the crossings over Moorabbin Road and other roads would be flush with the roadway and similar to railway crossings. [5] With these assurances Cr Mills and Cr LePage moved that a permit to construct the tramway be granted.

A four-acre block of land opposite the Presbyterian Church and on the corner of Tulip (Park) and Charman roads, stretching back to the railway line, was purchased for £375 from G T Allnutt and negotiations were completed with the Railway Department to extend their line and construct a private siding. [6] With these arrangements in place, a large iron shed was erected on the land, rails and sleepers were purchased, and the laying of the two foot six inch gauge line commenced.

Wadey reported to Council in August 1908 that the horses used to pull the loaded trucks proved unsuitable. When he first proposed putting down the tramway he intended to use the 5 feet 3 inches wide gauge as used by the Railway Department but found the costs prohibitive. The Railway Department required £500 to make the junction with the main line and, in addition to a freight charge, wanted two shillings and six pence for every truck sent over the extension.[7] Consequently Wadey adopted the more economical narrow gauge. On this occasion he asked the Council to give permission to use steam power on the tramway, an arrangement he suggested would be safer than horses and provide a capacity of about eight trucks, while not exceeding six or seven miles an hour.. [8]

It was Cr Mills supported by Cr LePage who proposed that Mr Wadey’s request be granted but it was conditional. First, if horses became frightened the engine should be immediately stopped, and secondly, owners of vehicles should have precedence on the road at all times. [9] Cr Mills commented that the Cheltenham horses were fairly well acquainted with trains and motor cars, but it would be as well to stop the engine if a horse showed signs of fractiousness, particularly in Tulip and Centre Dandenong roads. [10]

The newspaper reported the following week that the ‘Heatherton Express’ had made its trial trip but “owing to the low cowcatcher, it was found necessary to lower the sand slightly along the track’. [11] Once this was done the engine with four loaded trucks proceeded at a good pace announcing its presence at danger points with a full blast on its whistle, a ‘prominent asset’. It was later reported that the Heatherton line was a ‘snorter’ when the engine was successful in hauling four trucks full of 4-inch pipes and twenty empty trucks. [12]

It was in October 1908 that the tramway and workers’ camp were officially opened by Sir Thomas Bent. Two hundred guests were conveyed from the Cheltenham siding at 2.00 p.m. in the ‘Heatherton Express’ sporting a new coat of paint and with the engine named ‘Nancy’ after the daughter of the contractor, Mr Wadey, to partake in afternoon tea and be entertained by the Moorabbin Brass Band

The train again came into local prominence with the laying of the foundation stone for the new buildings although on this occasion the ‘Nancy’ was joined by the new engine, the ‘Elfreda’, in conveying invited guests to the site of the ceremony. A special train left Flinders Street, Melbourne and it was met at Cheltenham by the two narrow gauge trains liberally decked out in bunting and greenery, and equipped with comfortable seating. The Elfreda drawing sixteen trucks was the first to leave for the asylum. Constable Edwards was aboard one of the last two trucks, which were loaded with bricks to provide the necessary ballast. The Nancy followed with ten trucks. [13] 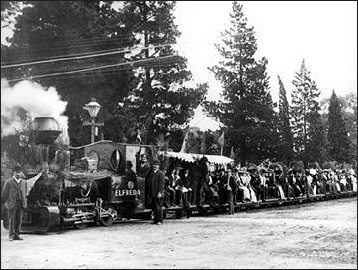 The Elfreda transports guests at Cheltenham for the laying of the foundation stone for the new Melbourne Benevolent Asylum, 1909.

Mrs E Harvey, a daughter of the Secretary and Superintendent of the Asylum, Mr A E Laver, recalled that the two engines, “The ‘Nancy’ and the ‘Elfreda’ were a joy to the youngsters of the district who occasionally managed to get a free ride. When the building was completed in approximately 1910, Mr Wadey gave the school children a wonderful treat. They were taken over to the Home in the little train and given a picnic lunch.” [14]

While the Age report of November 7, 1910 urged the Asylum authorities to keep the line open to convey inmates and supplies, it was decided not to buy the two miles of tramway track as the price was considered to be too high. There were also sections of the track needing to be re-laid and a new siding was required at Cheltenham. Consequently the tramway was taken up before the end of November 1910 and the opportunity to maintain the service lost. [15]