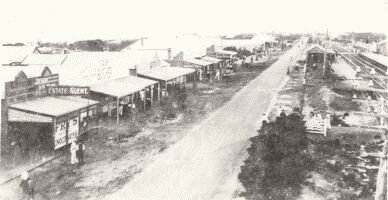 Chelsea Shops from the corner of The Strand and Point Nepean Road with Railway Station to the Left, c1920. Courtesy Chelsea and District Historical Society.

On the morning of October 8, 1923 Thomas Reginald Berriman, the manager of the Hawthorn Branch of the Commercial Bank, was accosted by two men outside the Glenferrie railway station when he was carrying a suitcase containing £1851. The two assailants tried to wrest the suitcase from him. Refusing to accede to their demand he was shot and sustained a serious wound in the right chest. The robbers escaped running along a narrow footway to where a car was waiting.

At first there was hope that Mr Berriman would recover but after an operation attempting to remove the bullet his condition deteriorated. The wound became septic and on October 21 he died and was buried with full Masonic honours at the Boorondara Cemetery. However, before his death a special court session was held at his bedside at the private hospital enabling the police to gain a signed deposition of events.

After Berriman died the police intensified their efforts to apprehend the criminals raiding houses throughout Melbourne. Angus Murray, an escapee from Geelong Gaol, was arrested as a result of a raid in St Kilda and charged with robbing Berriman. Leslie (Squizzy) Taylor was also arrested in St Kilda and charged at the city watch house as an accessory to the felony committed at Glenferrie and harbouring and maintaining Angus Murray and Richard Buckley. A reward of £500 was offered to anyone who provided information which led to the arrest and conviction of Richard Buckley.

The description of Buckley circulated by the police read as follows: “59 years of age, height 5 ft 4 ½ inches in his socks. Looks about 5 ft 6ins when dressed. Heavily built and corpulent. Weight about 12 st 7lb. Brown hair inclined to be thin. Brown eyes. Cross on right forearm, several blue marks on left forearm and on the back of the left hand; a dancing girl with wreath, standing on a ball, on the inside of the lower right arm; wreath and a woman’s head on the inside upper right arm; coat of arms on the inside lower left arm, and a vase of flowers on the inside upper left arm.”

Many people, perhaps motivated by the reward, responded with information but in most cases it proved to be worthless and time-wasting as these false clues had to be followed up for some time before they were abandoned. The story was told that a detective in the muster room announced that police had been told that Buckley was in a city hotel. When asked did they follow the information up the detective said “no” because shortly after they were told he was fishing from the Brighton pier. There was one instance, however, where detectives raiding houses throughout Melbourne thought they had missed him only by minutes. The unmade bed was still warm. Police believed that Buckley was constantly moving from one place to another to elude them. This caused them to reconsider their enquiry strategies. Instructions were issued to plain clothes and uniform members of the force to follow any person of doubtful character whose actions might suggest that he or she was harbouring anyone. [1] They also suggested that the reward for information should be increased to £1000.

On October 29, 1923 a young man was arrested and charged with drunkenness at the city watch house. Shortly after, his brother arrived and in the course of conversation the police came to the view that Buckley was working as a hod-carrier for a bricklayer near Frankston and that he was living about nine miles from the township. [Argus October 30, 1923] Immediately a party of detectives set out to check the information and it was this event that formed the basis of a heated confrontation between two rival newspapers.

The Carrum Borough Gazette and the Chelsea News circulated their papers in a similar area. Both wanted to increase their circulation and advertising revenue, but they also needed to increase the number of private jobs to keep their printers at work. One of the prized contracts was that of official printer to the local council. This role in 1923 was held by the Chelsea News as was the case since the Borough of Carrum was separated from the Shire of Dandenong. But the Gazette coveted it.

On October 19, 1923 the Carrum Gazette reported under the heading “Detectives Visit Chelsea” that a party of detectives led by Senior Detective Glugston, plus two local constables, raided a house in Wimbourne Avenue. While there was much speculation about the purpose of the raid the paper assured readers that “no well known or old resident of the district was concerned in the visit.” The next day the Chelsea News asked the question “Is Buckley in Chelsea?” and reported that two residents claimed to have seen a man in Chelsea with features very similar to Buckley. The article went on to explain that ten city detectives staged a raid on a house bursting in the front door and detaining a person at revolver point. Moreover, the writer suggested that Chelsea was an ideal place for criminals to hide and had been the scene of many police raids “seeking men who were in hiding from city sleuths.” [2]

The Gazette in its next issue claimed that Chelsea had been libelled by The News. While not claiming the story should have been suppressed it believed the information could have presented Chelsea in a more favourable light, particularly as The News was “The Official Organ of the Municipality” and the beneficiary of some hundreds of pounds of ratepayers money. But it also suggested that some of the information presented in the story was pure fiction. There were only five detectives in the raid on the house and not ten as The Gazette stated. The statement that Chelsea, over the past years, had been the scene of many police raids was a damning statement that need not have been written. Indeed, The Gazette questioned the accuracy of the statement and challenged The News to provide evidence. The Gazette continued, “Since the Chelsea News appeared on Saturday last the people of Chelsea have been furious with indignation at the unwarranted libel on Chelsea in the one instance, and the contemptible innuendo in other parts of the article, particularly the business people, who feel that such a thing as this is quite likely to ruin the coming summer season in Chelsea.” [3] One business man, it claimed, was going to petition the council asking them to censure the official organ, and to cease all business dealings with them for twelve months. The Gazette saw itself as championing the cause for Chelsea, the white knight charging to the defence of the district, setting forth the motto of the Chelsea Progress Association, “Let Chelsea Flourish”.

The News responded the following week reporting that the Chelsea Progress Association wrote to the Council asking that they show their disapproval of The News by withholding its patronage for at least one year. Rather than answering the criticisms of the Gazette the News referred to comments attributed to an old Moorabbin councillor who was purported to have said that “progress associations are unauthorised bodies of dissatisfied ratepayers and, therefore, of no consequence.” The News went on to point out that the letter from the Progress Association to Council was authorised by the Progress committee of six members, two of whom were employed by the Gazette. They also reminded their readers the Gazette had tried to gain “Official Organ status” on two previous occasions without success because the News had satisfactorily filled the role since the inception of the Borough.

Cr McGarry, commenting on the Progress Association’s letter, said in the past Chelsea had an unsavoury reputation which it had lived down. Nothing could now cast upon it the old stigma. He thought the News article was fair comment but unwise in that it advised Buckley that police were close on his track. Cr Stephens said publishing the facts would not hurt the town. Cr Hunter saw no harm in the article. He only hoped that if Buckley was in the district the police would send as many detectives as they could get. The mayor, Cr Richardson, said Chelsea was now largely peopled by permanent residents and he did not believe in gagging the press. A motion that no action be taken concerning the Progress Association’s request was passed unanimously.

The police strike in Melbourne occurring at that time and the subsequent riots took attention away from the hunt for Buckley. Reports in the Argus became less frequent as police attention moved to Sydney where it was thought Buckley was hiding out in Manly and the two local competing newspapers settled down to reporting local sporting events and social happenings in the bayside towns. It was seven years later on September 30, 1930 that Buckley was captured by police at Moonee Ponds. He was sentenced by the court to life imprisonment but was released in 1946 because of advanced age and ill health. However, he survived until 1953 when he died aged ninety years. [4]