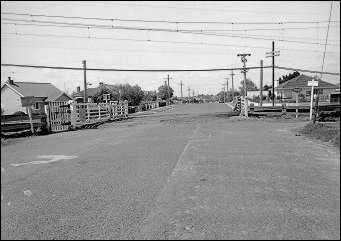 A tragic accident occurred at the Balcombe Road railway crossing at Mentone on March 14, 1914. Mrs Jessie Ann Robinson, the 55 year old gate keeper was run down by a train and instantly killed. Her head was severed from her body.

The report in the local newspaper said the employees of the Colonial Ammunition Company had been attending a picnic [1] It was about 9 o’clock when they were returning home. Part of the group had already left when a second special train arrived at the platform for trains to Mordialloc. It had to be shunted to the up line by passing over the crossing. Before it returned from the shunt a motor car and horse and cart arrived wishing to cross. Mrs Robinson thinking there was time to let them pass before the train returned opened the gates. Unfortunately she was wrong. The train returned, led by the guards van, while Mrs Robinson was attempting to close the gates after the vehicles had passed safely through. The train crashed through the gates knocking Mrs Robinson down.

After twenty four years of service at this crossing she had received notice of a move to another set of gates at the other end of the station. The Balcombe gates were to be connected to a new signal box constructed at the end of the platform for trains to Mordialloc from where they would be opened and closed. This was the last week of Mrs Robinson’s duty at Balcombe Road. Already she had packed some of her furniture in anticipation of the move.

Dr R. Cole, the Coroner, found that her death was by misadventure but was critical of the performance of the guard of the train and the signalman. [2] He believed they should have seen that the gates were closed against the train, although he agreed there was insufficient evidence to find them guilty of manslaughter.

The Coroner was also critical of the action of the Railway Department in putting a woman in charge of these heavy gates "for seven hours on and during the busiest part of the day … for four and sixpence per day." He thought that the job was more appropriate for a man.

Mrs Robinson was a widow with three married children at the time of her death. Her husband who had been employed as a guard in the railways was killed in an accident at Bendigo. After his death she was given the gate keeper position at Mentone. It was a policy of the railway commissioners to find suitable positions for the family of deceased employees. As Chief Commissioner of the Railways, Mr W Fitzpatrick, was reported to say, "In many cases, if the Commissioners had not extended consideration, poor women and families would have been thrown out into the world to struggle for existence outside the service…It is not out of desire for economy that the Commissioners employ women at gates."

Mrs Robinson, the newspaper reported, was a much admired member of the Mentone community for her genial attention to the job of opening and closing the gates for a period of twenty four years. "She invariably had a pleasant word for every traveller and did not keep them waiting any longer than necessary." A reporter noted that these qualities were not possessed by a large number of gate keepers and were never likely to be. [3]

A committee was formed to collect subscriptions for a suitable memorial. [4] Receipts totalled £35-5-6 including a £5 donation from the Railway Commissioners. This money was used to purchase a memorial tablet that was erected over her grave and that of her husband, at the Williamstown Cemetery. [5] The cost was £30-9-0 leaving the committee to dispose of the balance. 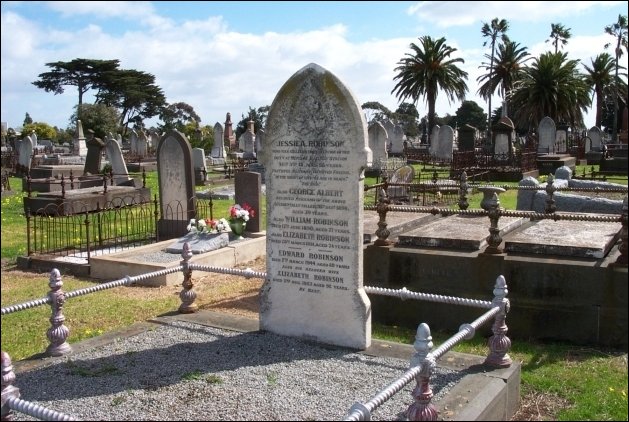