Foundation of the Mentone Fire Brigade

In 1905 a reporter on the relatively new local newspaper, the Moorabbin News, was berating the residents of Mentone about their inaction regarding the establishment of a fire brigade. He described them as living in a “fool’s paradise” pointing to the prevalence of scrub fires during the summer season. It looked as though, he said, the locality had to be almost destroyed by fire before anyone took any action. [1] The community at that time relied upon volunteers rallying to the cause of a distressed neighbour to extinguish any fire. It was later in 1905 that attention was given to creating a more permanent and professional force.

Earlier, Captain Marshall of the Country Fire Brigades Board had visited Mentone on the invitation of Cr Scudds and others, and informed those present that £120 was needed to establish a presence of the Board in their town. After subscribing this money and a period of four months the Board , he said, would take over the liability of providing a fire service. A meeting of local people to be held in the Recreation Hall was called for the end of March to gather more information. Captain Marshall had agreed to attend and it was arranged that the Shire President, Cr McIndoe would chair the meeting. One of the attractions offered regarding the meeting was the fact that Captain Marshall would inform those present of the best means of forming a brigade and how it could favourably influence a lesser rate charged by insurance companies. [2]

The proposed meeting took place with a “fair” attendance of local people. W Wharington, in addressing the audience, stressed that among the advantages of having their own official brigade would be a substantial reduction in the cost of insurance premiums. The £100 that had to be provided by the local community would be used to obtain “1000 feet of hosing, couplings and branches, also a shed to keep the equipment in.” At the end of four months the Country Fire Brigade Board would take over responsibility and provide £15 per year for equipment, £3 annually for the secretary and provide uniforms. The Council would contribute on the basis of property valuations within the served area. From 15 to 20 volunteers, all 18 years or older, would be required to staff the station. The meeting agreed to proceed with the proposal and elected a committee to see to its implementation. [3] [4]

One month after the public meeting and the decision to work with the Country Fire Board a letter was received by the Moorabbin Council from the secretary of the committee requesting the council to petition the Metropolitan Fire Brigade to extend their area of interest to include Mentone, Cheltenham and Mordialloc. Mr Wharington pointed out that the Metropolitan Fire Board option was superior to that of the Country Fire Board in that it catered for three townships, and regular firemen, rather than volunteers, would be employed. [5] A station was proposed for Mentone with auxiliary “sheds” at Cheltenham and Mordialloc together with a proper fire alarm system spread throughout the district.

Council secretary responding to a request from the Metropolitan Fire Board defined the boundaries of the area the council wanted included in the scheme. It embraced Reserve Road to Beach Road, including Cheltenham, Mentone, Mordialloc and Beaumaris, but excluded the portion from Beaumaris to Black Rock. The total valuation of the defined area was given as £21,465.

The Chief Officer of the Brigade, along with several others, inspected possible sites for stations. The position next to the Orderly room in Cheltenham met with their approval, and the site at the Recreation Hall, Mentone was considered ideal. Two locations in Mordialloc were under consideration, one being opposite Rennison’s Hotel. Advocates for the local station considered their chances of achieving their goal were good.

By July of 1905 it was reported in the Moorabbin News that arrangements were almost completed, and that it was intended to build a station at Mentone at a cost of £600. [6] Later reports indicated the cost was £660 but that provided for a building that was only a shell. 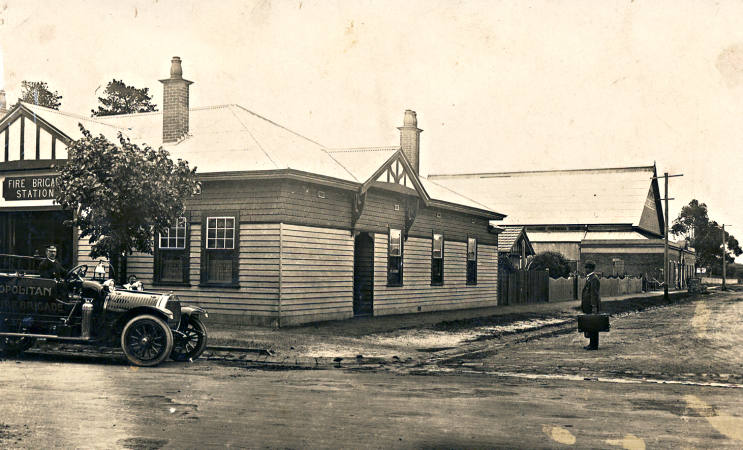 Mentone Fire Station on the corner of Como Parade and Brindisi Street with skating rink and picture theatre in background. Courtesy David Rawlings.

It was on March 13, 1907 that the fire station at Mentone was officially opened by the Hon J Aikman MLC, President of the Metropolitan Fire Brigade Board. The occasion was set to commence at 3.30 and by 3 o’clock the venue bedecked with bunting was crowded with men and women admiring the premises and equipment. According to the press report the ladies were impressed with the local firemen dressed in “full regimentals” while waiting for the arrival of the Premier. [7]

After a delay of fifteen minutes contact was made with an officer at headquarters who informed them that Mr Bent had left for Mentone. By quarter to four there was still no sign of the Premier. Mr Aikman, after a display by the firemen, addressed the gathering, made a short speech declaring the station open and invited all to adjourn to the adjoining building where “the ladies would be better employed eating sweets.” It was in the Skating Rink that about 200 invited guests of the Board partook in a luncheon catered for by Cr Scudds of Mentone Hotel.

Mr Stein, the Chief Officer of the Brigade replying to a toast in his honor pointed out that the Board could not afford to put a full staff of permanent men at Mentone, but his idea was to send down any member of the brigade who had rendered good service, in order that they might have a rest. The auxiliary firemen who had been appointed would be paid for attending fires. After the speech of Mr Stein the singing of the National Anthem brought the proceedings to a close. [8]

The absence of the Premier, Mr Bent, from the celebration was noted with some disappointment by members of the community. They subsequently learned that Mr Bent attended the opening of the Epileptic Home in Clayton. While understanding he was a very busy man it was felt, as a matter of courtesy, he should have informed the organizers of the Mentone function explaining his absence and thus obviating the unfortunately long delay in commencing the official part of the Mentone occasion and dispensing with the anxiety felt by some of the audience for his safety. Other individuals were offended because they did not receive an invitation to this important community occasion. As Mr Wharington explained, all people who had responded to the original appeal for money did receive an invitation. Those who were complaining had the opportunity to contribute but failed to do so. Hence the lack of an invitation. [9] 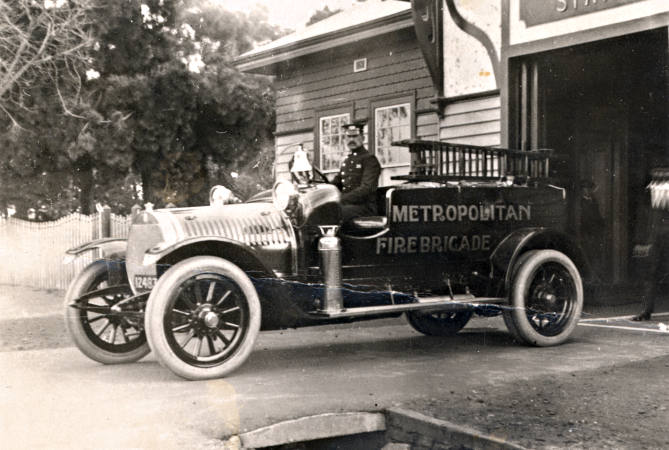 The Mentone station on the corner of Brindisi Street and Mentone Parade continued to serve the local community until 1956 when a new building was constructed near the junction of Nepean Highway and Warrigal Road. The new station, like the original, was opened by the President of the Metropolitan Fire Brigade Board, at this time Mr F Faram. This new station, included messing and recreation facilities together with accommodation for a relieving officer and two resident officers. The estimated cost of the new station was £50,000 with a maintenance cost of approximately £16,000 per year. The station is today one of a network of stations servicing the community of Kingston. 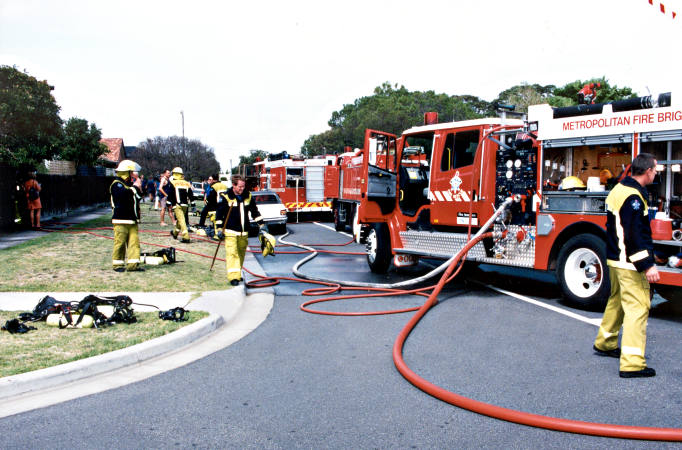 Firemen cleaning up after a house fire in Mentone, 1998. Courtesy of Leader Collection.