About fifteen years ago (1908) settlers began to appear on the Downs. Estates were subdivided and sold, and a beginning in settlement made. Then began strenuous days of toil for these pioneers in clearing the wilderness, for surely it was a veritable wilderness in those days. On every side were to be seen forests of trees, dense scrub, bracken and rabbit burrows, all waiting the onward march of time and civilisation to effect the transformation scene that was destined to take place.

Stout hearts and brave spirits were needed, and these were not lacking. Against great odds the handful of settlers battled and it is pleasant to remember the hearty spirit of goodwill and helpfulness to each other that pervaded the district. Social evenings were held in private houses from time to time and everyone was assured of a hearty welcome. There was no orchestra to accompany the waltz and old-fashioned polka, and no polished floor, but what mattered that? There was goodwill and kindness, and hospitality, and this was all that was required.

Everyone had settled with the intention of carving out a home. Nobody was very rich and no one very needy, but, one and all, were united in the band of good fellowship and the energy and spirit to work. Each one had his difficulties and hardships two endure, but these were all in the game, and it all helped to develop strength of character as well as a home.

Roads? A sandy, bushy track led to Frankston – enough to break the heart of any self-respecting horse with half a load on! And the Carrumvale Road? A boggy, impassable quagmire in winter; a bumpy sandy wilderness in summer, hedged on both sides with desolate ti-tree and jungle. There was no such place as Seaford – only acres and acres of scrub and desolation. Another sandy track led to Dandenong. Settlers who had begun to clear and cultivate their holdings now engaged in dairying or market gardening, and heavy loads had to be carted over these tracks. 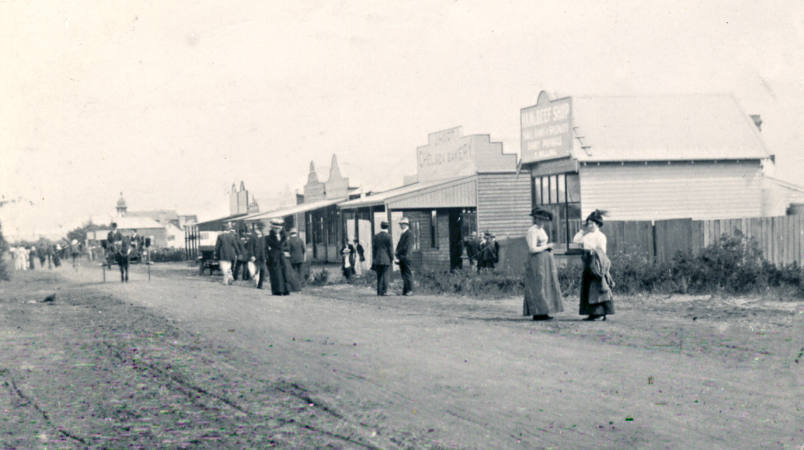 School was held in a private house with an attendance of about a dozen children. Carrum was a village, and Chelsea only a flag station. A number of these first settlers have remained in the district, and have seen a marvellous change take place. Now, what a change! One sees the beauty of wide, rolling downs as far as the eye can see, stretching away down to the sea. Beautiful green pastures meet the eye in all directions. Dairying is an established and profitable industry. Some also engage in market gardening as the soil is eminently suitable for this purpose.

The beauty of the district is enhanced by the splendid plantation of pine trees which flanks the road to Frankston, and also by the many and varied kinds of wild flower which bloom in spring time and turn the countryside into a garden. And last but no means least all kinds of birds, both beautiful and musical make this their home.

Good metalled roads now take the place of old, sandy tracks, giving pleasure to settlers and tourists alike. What a wonderful difference good roads make! A modern school is built and numbers over sixty children on the roll. The population has increased greatly and Carrum Downs is now an important district.

The electric current is borne along the highway from Dandenong to Frankston giving promise of future comforts in store. The townships along the seaboard, all with easy reach, have proposed and become correspondingly important. Seaford has sprung into being, a beautiful seaside resort, with a safe beach, good railway station and electric train service, large modern school, electric light, all most wonderful to think of when comparing it to the nameless wilderness of ten years ago.

Frankston has developed from a nice, sleepy old world village to a go ahead, prosperous town, full of keen business folk and good citizens anxious to keep pushing it on. With all its great natural advantages Frankston is destined to become great. Dandenong has also marvellously advanced and only a few miles from all these towns lies Carrum Downs, a beautiful place carved out of the wilderness by the pluck and grit of its pioneers and still being developed by its present most desirable type of settler.