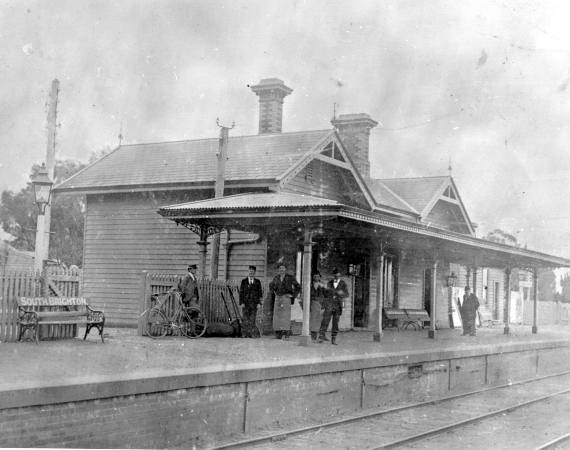 In 1840 Henry Dendy, while in England, purchased from the Commissioners for Land and Emigration the right to select 5120 acres at Port Phillip. This was known as a Special Survey. For this right he paid £1 per acre. The next year, following his arrival in the new colony, he presented his land order to the authorities who frustrated his attempts to select land close to the growing town of Melbourne. [1] Ultimately he marked out a selection in the parish of Moorabbin , county of Bourke, which gained the name of Brighton. It took in the area from the foreshore between what is today North and South roads and it stretched east to East Boundary Road. To the north-west of the Special Survey a contemporary map notes a cattle station named Moorabbin and to the south-west another cattle station named Ballygy. The Special Survey covered a significant portion of the Parish of Moorabbin. [2]

Dendy commissioned the surveyor H B Foot to draw up plans for the new town extending over 250 acres. The area close to the foreshore and where Dendy built his home, became known as Big Brighton while land further inland took the informal title Little Brighton. With the growth of Brighton over the next decade the sparsely settled areas south of South Road became known as South Brighton while the area to the east took the name of East Brighton. When the Melbourne to Mordialloc railway line was constructed in 1881 two of the stations were given the names of East Brighton and South Brighton. Further to the west in 1859 the Brighton line had been opened as far as Bay Street, Brighton, and shortly after to Brighton Beach and subsequently to Sandringham.

By 1906 the Railway Commissioners were concerned about the confusion caused by several stations on separate lines sharing the name Brighton. Cr Thomas Bent reported to the Moorabbin Council that the Railways Department was contemplating altering the names of the South and East Brighton stations. [3] Following the information provided by Bent a public meeting of South Brighton ratepayers was held and it was at this meeting that the name Moorabbin was unanimously supported. A similar meeting was not held in East Brighton but Cr Clements indicated that he was going to suggest Bentville as the replacement name. However, as the Railway Department had not asked officially for replacement names the Mayor ruled that no action could be taken at that time.

Subsequently the Railway Department wrote to the Shire asking that consideration be given to renaming South Brighton and East Brighton stations. Cr Brownfield reported the outcome of the South Brighton meeting to the Council with the result that Cr Small moved that the name Moorabbin should be conveyed to the railway authorities. Other councillors were not so sure. Cr Ferdinando believed the matter required further consideration as Moorabbin was an extensive shire covering over 82 square miles and queried the fairness of naming one of the smallest stations after the municipality. Cr Scudds of Mentone supported him. It was finally resolved to defer the matter to allow time for the residents to be asked for their views. In the case of East Brighton the matter was left in the hands of two councillors, Cr Burgess and Cr Clements. [4]

Earlier when the newspaper, Brighton Cross, called for suggestions of names for the two stations two lists were prepared containing many options. For South Brighton the names offered were:- Barnett, Morley, Baden Hill, Cooney, Exley, Morndawn, Joyceville, Sobriton. For East Brighton the suggested names were:- Bentleigh, Dunlop, Whitmuir, Ellendale, Dewspark, East Lyne, Clementine, Langdon, Eunson, Gruer and Dendy. These names along with creative suggestions reflected the names used in the early days of the settlement, of pioneers and contributors to the development of the district. The name Bentleigh was referred to the Railway Commissioners for consideration in December 1906 and was approved in 1907. [5]

The suggested name of Moorabbin drew a negative response from some readers of the Brighton Southern Cross. Early Eclipse saw the South Brighton residents as being extremely selfish to take to themselves the name of Moorabbin as the name applied to the whole area of the shire. The writer pointed out that the shire included “the populations of the seaside townships and the gardeners out back to the borders of Dandenong, Oakleigh, and Clayton. Applying the name Moorabbin to South Brighton, and an area of thirty-one out of the shire’s thirty-two square miles is robbed of its birthright to satisfy the vain glorious self aggrandisement of a small portion of the community.” [6]

When the matter of renaming South Brighton station came before the council for resolution Cr McIndoe spoke vigorously against the proposal to adopt the name Moorabbin. He suggested it was like New South Wales claiming the name Australia and he asked why “this little corner of the vineyard was picked out for distinction.” He went on to point out that the Moorabbin Swimming Club was at Mordialloc and the Moorabbin Bowling Club was at Mentone. Cr Ferdinando, supporting his colleague, suggested the adoption of the name Dendy, a name associated with the early European history of the area., but agreed it was not the best possible choice.

Other councillors were not impressed with the anti-Moorabbin argument. Cr Clements claimed that the South Brighton district had been known as Moorabbin for more than thirty years. Market gardener vehicles coming from that part had the name Moorabbin painted on them, he said. The name had been lost, so it was simply getting it back again. Cr Le Page who attended the Moorabbin Wesleyan Common School in the district at first opposed the suggestion of Moorabbin but changed his position to support it. Cr Burgess cheekily observed that when people in the future looked back and saw the names of the councillors who supported the Moorabbin proposal they would comment, “They were wise men.”

Cr Ferdinando moved with the support of Cr McIndoe that the name Dendy be forwarded to the Railway Commissioners as the answer to their enquiry. However, it failed to get the support of the majority of councillors. Cr Brownfield, the president of the shire, although not taken with the name Moorabbin, supported its adoption as it was the wish of the local ratepayers. For him personally, he thought a prettier one might have been selected. [7]

Just before Christmas 1906 the council received a message from the Railway Department indicating that the suggested name of Moorabbin had been placed before the Railway Commissioners for their consideration. It was adopted the following year. Later in 1907 a report in the Moorabbin News drew attention to the importance of widely communicating the changes of names of stations to travellers by recording the probably fictitious action of “two celestials.” The two men concerned had been to the city to play their favourite game of Fan Tan and travelled home on the train. The arrival of the train at Bentleigh was announced by the guard, but the two men failed to hear him being deeply immersed in their conversation. Moorabbin was reached, but the conversation continued. Highett, shouted the guard, and then a commotion ensued. ‘Highie, Highie,’ shouted the Celestials in chorus, jumping out of the carriage and rushing to the innocent guard, waving their arms, and gesticulating wildly. “Highie, wha for,” they shouted, and four fists were brandished in front of the astonished guard’s face.” “Wha for you say Highie, why you not say Sousee Brighton, Easee Brighton.” But the guard had escaped to his van and the two men wended their way homeward at a jog trot, more convinced than ever that they were living in a cruel, cruel world.” [8]