Mordialloc Memorial to Those Who Served 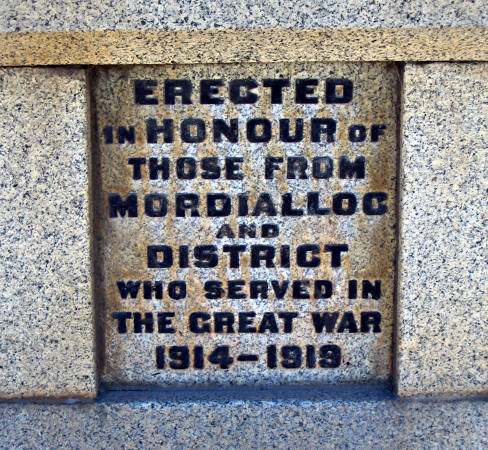 During the Great War of 1914-1918 the tragedy of war was constantly put before the people at home in articles and reports of casualties published in local papers. [1] Signaller C Mewett wrote describing the landing at Gallipoli and how men were dying all around him. He caught a bullet in the left foot but considered himself “the luckiest man alive.” James Harkings was a prolific writer telling of the thrill and revulsion of combat. Corporal Whitehead, Reg Foreman and Jack Fisher were other local boys who described the conditions and horrors of the Great World War. These messages stirred the emotions of many people back home and made them aware of the sacrifices that many of their brothers, fathers, relatives and friends were making on their behalf for the Empire. [2]

It was on June 1, 1915 that it was first suggested at Mordialloc that a memorial should be erected to acknowledge the contribution of men who had enlisted for active service. While a committee was formed progress was slow as the view was adopted that it was better to wait and erect a larger and more significant memorial once the war was over. The Council had however given approval for the memorial to be erected at the junction of Beach and Nepean roads and a small amount of money had been donated. On November 30, 1918 the issue was raised again. G Fethers presided at a well-attended meeting held in the Mechanics’ Institute Hall. The original committee, appointed in 1915, all resigned to allow a larger and more influential committee selected by the community to be appointed. [3] At an estimated cost of £400, the goal was to erect a fountain which would contain a plaque on which was inscribed the names of all the soldiers who enlisted. To raise the required money it was planned to approach the public but the appeal was delayed so that it did not clash with an appeal being made by the YMCA. [4]

Ten months after the formation of the new memorial committee a sub branch of the Returned Sailors and Soldiers Association was founded at Mordialloc. At the first meeting of the Branch a motion was passed calling for the replacement of the fountain proposal with one for the building of a memorial hall, “a far more worthy object.” [5] Subsequently a letter from the Assistant Secretary of the Sub-Branch, Mr W H Triggs, published in the Moorabbin News, pointed out that a letter had been sent to the secretary of the Fountain Fund asking that no further action be taken in erecting a memorial fountain and that canvassing for donations for this purpose cease. For the returned service men the fountain was considered a waste of money. [6]

The Soldiers Fountain Committee announced that it was their intention to adhere to the original proposal to which many people had contributed money. As the money was collected for a specific purpose it could not legally be transferred to any other was the committee’s judgement. Two hundred pounds was in hand and plans had been made for a systematic canvass to gain the additional money required. The district had been divided into eleven sections and collectors appointed. It was hoped that the outcome of the canvass would make unnecessary any further appeal for funds.

Of the £200 in hand, over one quarter had been raised through a bazaar organised by Miss Muholland. After paying expenses the £60 4s profit was passed to the treasurer, C Caudwell. The stalls at the bazaar included, cakes, sweets, drinks, drapery, flowers, refreshments, dips, produce and hoop la. [7]

Almost five years later it was announced that the drinking fountain on the Creek Reserve Mordialloc was nearing completion. Hoskin and Company of Hawthorn were responsible for the design and erection of the imposing memorial easily seen from the main street or when crossing the bridge across the creek. The memorial was described as a monument rising fifteen feet above its foundation of two bluestone steps. The memorial itself was constructed of fine Harcourt granite on a rough-hewn base. The panel facing the street was inscribed with raised block lettering to read “Erected in honor of those from Mordialloc and District, who served in the Great War, 1914 – 1919.” Four square pillars carried a dome capping, under which four drinking taps were placed. Standing on top of the dome was a base in which was inserted a bronze emblem of the Australian Rising Sun Badge. This base carried a round column, 4 ft 6 in height, which was surmounted by a ball and square, the whole structure, it was claimed, formed the most impressive monument south of Melbourne. [8] The original plan to record all the names of Mordialloc and District men who served in Australia’s military forces during the Great War did not occur. 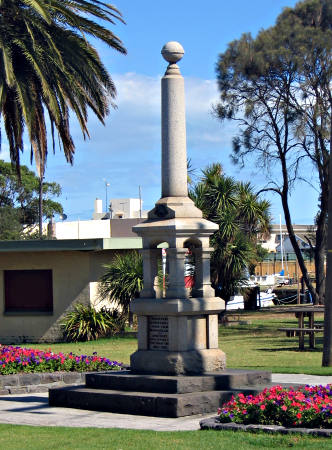 In July 1928 the Mordialloc Carnival Committee wrote to the Mordialloc Council asking that the fountain be moved to another position so that the piece of land if occupied could be used to place a recently purchased merry-go-round. The committee were delighted with their new purchase as they saw it fulfilling an entertainment need for the younger members of the community. In the request to the council they indicated they were willing to pay the outstanding debt on the memorial. Apparently the move was implemented. [9]

Three months later the Memorial Fountain Committee formally handed over to the Council the drinking fountain with Cr Blanche informing them that the council accepted with pleasure. [10] Today the fountain remains by the Mordialloc Bridge although the taps associated with it have long since been removed. It stands as a memorial to those who served. The Mordialloc carnival has ceased to exist and the merry-go-round was removed and later restored to be placed at Geelong. 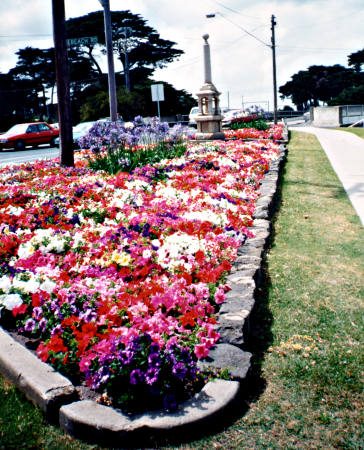