The early pioneers in the colony of Port Phillip were conscious of the need to provide for the education of their children and for their spiritual needs. Schools were established and these same buildings were often used for worship services on Sundays. Later, churches were built. John Matthew Smith a wealthy early settler in the Moorabbin district with a strong personal faith and commitment to the Church of England was a significant contributor to this development.

John Matthew Smith was born at Shropshire, England in 1815 to John Smith and Emily Smith (Linwood) of Ludstone Hall, Claverley, Shropshire. On the death of his mother his father married the widow of Captain Hunt, a veteran of Waterloo. Young John Matthew Smith did not get on with his stepmother and left home for London. [2] There he married Anne Hunt at St Brides Christchurch in the county of Surrey in 1836. [3] Anne was the daughter of his stepmother. John and Anne came to Victoria three years after their marriage with John inheriting a large fortune from his grandfather. On arrival in Melbourne he worked as a law clerk with Carrington and Clay until 1849 when he was admitted to practice as a solicitor, following in the footsteps of his father. Initially he worked from 33 Bourke Street East and later from 58 Chancery Lane. He established the law practice of Smith and Emmerton with Henry Emmerton. [4] In 1842 he was one of ten applicants, including Mr R W H Budd of Brighton, for the position of first town clerk of Melbourne. [5] It is recorded that a great deal of lobbying occurred over this appointment, which was gained by J C King. [6] The next year Smith stood as a candidate for the Melbourne City Council but withdrew his nomination before the election. The Argus reported that he withdrew from the approaching contest, “like Falstaff, perhaps thinking discretion is the better part of valour.” [7] The following year, 1854, he was successfully elected as a councillor for Bourke Ward, retiring from that position four years later in 1858. He also served as member of the first committee of the Melbourne Benevolent Asylum, founded in 1850, and later as treasurer. [8] 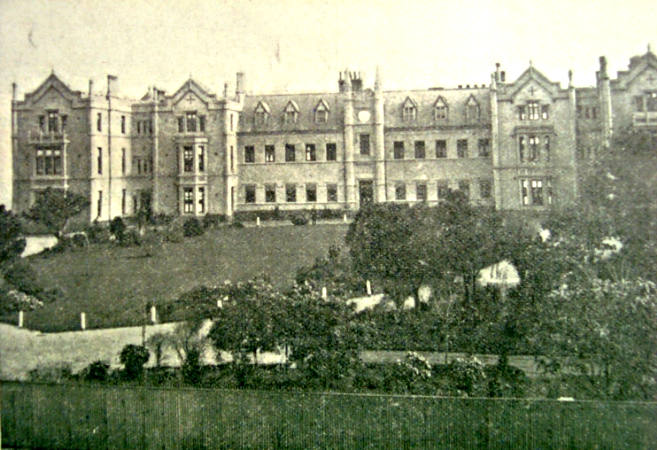 John Smith had a wide range of business interests. He was a member of the St Kilda and Brighton Railway Company and at one time owned the Royal Terminus Hotel in Brighton Beach. Property was also owned in Fitzroy and St Kilda as well as several buildings in the centre of the City of Melbourne. In 1856 he purchased from Thomas Splatt 38 acres located on the corner of Hampton Street and South Road on which was built the house known as Castlefield. Smith carried out many improvements to the house and purchased more land surrounding the property. By 1887 he owned 231 acres of land stretching from Hampton Street to Bluff Road. [9]

Disney, writing in 1997, said that the Castlefield property was “set in a beautiful garden with an ornamental pond and fountain. There was a large staff and the family were almost self sufficient with cows, pigs, fowls, a huge vegetable garden and a variety of fruit trees. There was a large barn, hayshed, dairy, extensive kennels and a duck pond. Another attraction was a beautiful fernery and a small zoo which included monkeys, and a huge aviary of exotic birds.” [10] At the time of his death there were at least six people employed on the property. [11]

As well as having his business interests Smith was a devoted member of the Church of England, serving as both a lay reader in many of the infant churches in the district and as a benefactor. Various records report him conducting morning or evening services at churches in Brighton, Sandringham, Cheltenham, and Mordialloc. John Matthew Smith was also a major contributor to the funding of the building of the church at Cheltenham. He was the honorary treasurer of the building committee and had paid for the use of the Mechanics’ Institute Hall for worship until the church was built. [12] It is said that the Cheltenham congregation recognized the significance of his contribution of £200 when they named the church St Matthew’s, using Smith’s second name. [13] At the time the church at Cheltenham was restored and refurbished in 1880 his wife donated plate and linen for Holy Communion. At Sandringham, according to a guardian or vestryman of the church, Smith presented nearly an acre of land, in what was known as Queen’s Square in Gypsy Village, and £400 towards the erection of the church. [14] In addition, he paid for all the inside fittings, seating and lighting, and the harmonium. Later the church, All Souls, was moved to the present Bay Road site. In later years he gave £100 towards the erection of the parochial hall. [15] St Andrew’s and St Peter’s in Brighton also benefited from his contributions. To the St Paul’s Cathedral Building Fund he made an annual contribution of £1000 over several years. On December 31, 1858 John Matthew Smith established the J M Smith Trust in which he bequeathed property in Fitzroy to the church, the income from which was to be given to the trustees of St Mark’s Fitzroy until the church was completed and free of debt. The Bishop of Melbourne was empowered to lease premises for any time not exceeding twenty one years. Once St Mark’s or any church or school in the parish were completed the rents were to be used to assist other churches. [16] Land was leased for the Mission of the Holy Redeemer and later used by the Church of England Free Kindergarten. The Alice Lovell Clarke Kindergarten was built on the property about 1920. Distributions from the trust continued into the 1980s including a distribution of £25,000 being made to seven parishes in 1967. [17]

Anne Smith, John Matthew’s wife, died at Castlefield in 1895 at eighty years of age. The following year John Matthew remarried. His second wife was Isabella Fordham Harriss, a forty two year old widow and a daughter of Colonel William Mair, an important figure in the history of Moorabbin. [18][19] It was at Mair’s property in Poowong, Nyora that Smith died on April 21, 1898 at eighty two years of age, the cause of death being given as senile decay. Two days later he was buried in the Melbourne General Cemetery. At the time of his death three daughters and a married son were still living; Emily, Lucy, Alice and John Matthew Vincent. Daughters Teresa, Harriet, Mary Florence, and son Allan had predeceased him. It is reported that on the Sunday following his death All Souls Church in Sandringham was draped in black and the congregation “stood in mute sympathy with relatives of the deceased and the sad consciousness of the loss of a good friend.” At the conclusion of the service the Dead March in Saul was played on the harmonium that he had provided for church services. [20] 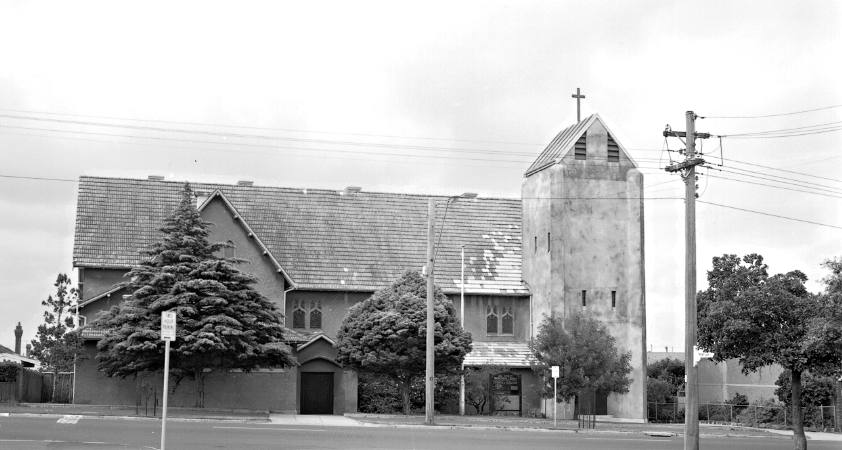 A newspaper report published after his death said he was averse to young men trespassing on his estate hunting rabbits and it was rumoured amongst these young men that Smith on his solitary rambles carried a gun loaded with salt for their special benefit. [21] Nevertheless, a guardian of All Souls church wrote in a letter to the Brighton Southern Cross that Smith was always generous to those in need. “While he conducted many acts of kindness he would not stand being thanked for his help as he was essentially a man who recognised that wealth had its obligations.” [22]

At the time of his death in 1898 John Matthew Smith’s estate was valued as £236,745-13-10. This included a large number of properties spread from the city to the suburbs, mortgages associated with loans to individuals and shares in a variety of enterprises. Property in the city included the Ludstone Chambers in Collins Street valued at £42,285, the property occupied by Messrs Chambers and Seymour in Collins Street valued at £34,400 and the property occupied by McLean Bros and Rigg Ltd in Elizabeth Street valued at £12,563. There were twelve acres of land bound by Smith and Young streets in Fitzroy and fourteen acres in Collingwood bound by Nicholson and Gipps streets, and Marine Parade. The land on which Smith’s home, “Castlefield” was built consisted of 76 acres with adjacent land of 133 acres leased to Richard and Alexander Ralph that ran from Hampton Street to Bluff Road in the east. [23] The hundred acres of land purchased from the Crown in September 1852 on the west side of Bay Road and Bluff Road had been subdivided but much of this was still to be sold. Smith also owned land on Marine Parade, Brighton, on which the Royal Terminus Hotel was erected and leased to Robert Evans at the time of his death. There was also land in the Parishes of Cornella, Cut Paw Paw, Sale and Tarra Tarra. [24]

Mortgages were held against twenty nine individuals some of whom were deceased. The security held against these mortgages was chiefly houses and land. In some cases the value of the security on which the loan was granted was insufficient to cover the principal of the original loan. This may simply reflect the economic conditions of the time. Land and property prices had fallen as an economic depression hit Melbourne resulting in the failure of banks and the bankruptcy of many individuals. The demand for land had fallen and many land entrepreneurs who previously made huge fortunes found themselves with financial commitments and obligations they could not meet. Many people lost their savings in the collapse of the banks and other financial institutions.

John Matthew Smith’s share portfolio was valued at £5701/4/0 at the time of his death. It included shares in several gold mines and power companies. The largest holding was in the Melbourne Tramway and Omnibus Company Limited with 1500 shares, the most expensive shares were those of the Melbourne Hydraulic Power Company at forty four shillings, each while the Squatting Investment Company and the Bank of Victoria Limited were the most valuable holdings at £1239/9/6 and £1242 respectively. He also held debentures in the Melbourne and Metropolitan Board of Works, the Government of Victoria Inscribed Stock and in the West Brighton Lawn Tennis Club together totalling £36769/14/7 in value. [25]

After his death the trustees of his estate were his son John Matthew Vincent Smith of Baringhup, his daughter Lucy Smith of Castlefield, his business partner Harry Emmerton and his accountant William Aitken. They were directed to sell and realize his assets but with the power to postpone such action. The income from the property in Collins Street occupied by Chambers and Seymour was to go to his wife Isabella Fordham Smith for the rest of her life. The Ludstone Chambers were to go to his son while the property in Elizabeth Street was to go to his daughter Lucy Smith. Alice Smith was given eight hundred pounds per year for life. To his married daughter Emily Cock he left five hundred pounds a year to be paid quarterly. Three thousand pounds was also left to the two daughters of his sister, Harriet Linwood Hitchcock. Any residue from the estate was to be shared equally by John Matthew Vincent Smith and his sister Lucy. [26]

The two unmarried daughters continued to live at Castlefield but gradually some of the land surrounding it was sold until only 80 acres remained. Further reductions occurred after the First World War when the War Service Homes Commission acquired seventy acres to build a large housing estate. On the death of Alice at eighty years of age in 1931 the remaining ten acres including Castlefield was purchased by Haileybury College to conduct a boys’ school. [27]

Opening of Castlefield as Haileybury College, 1932.