Bathing boxes are iconic structures along Port Phillip Bay foreshore, and significant beach architecture in parts of the City of Kingston. Built since at least the 1860s, we generally visualise bathing boxes as brightly coloured wooden structures. Municipal councils permitted ratepayers to build them, usually under very strict conditions and required payment of an annual fee. [1]

Innovation in bathing box construction technique and management occurred in the Mordialloc Shire in 1932. Mordialloc Council built fifty concrete bathing boxes on the Parkdale Beach opposite Antibes Street. Justly proud, the Council described them as ‘probably the finest of their kind in Australia.’ [2]. Cr James T Denyer first put forward the suggestion of concrete bathing boxes in the mid 1920s. As he later said: while walking along the foreshore, he noticed the dangerous state of the cliffs. He proposed the construction of the boxes to prevent cliff erosion and to create a public utility. Consequently, the Mordialloc Council, rather than private individuals, built the boxes and they were available to residents and non-residents alike by application to the Town Clerk at Mentone. The boxes were available on an annual lease or could be hired for the day or a week. [3]

Denyer’s contribution was honoured by the announcement at the official opening in April 1932 that the bathing boxes were to be named after him. Besides recognising Denyer, Cr Marriott, the Mayor of Mordialloc, made reference to other individuals who were involved in seeing the dream become a reality. [4] Significantly, Mr Kermode, an engineer with the State Government’s Public Works Department, was recognized for his work before and during the construction of the bathing boxes. As he was unable to be present, Herbert Cremean, the Member of Dandenong in the State Parliament, accepted a gift of a large photograph of the bathing boxes on his behalf. Cremean said that Kermode had acted as though he was an assistant engineer with the Council. Moreover, Kermode had been successful in securing many grants towards the cost of the structure and the employment local men, at a time of massive unemployment and distress in the community. Denyer, too, commented on a society suffering from a wave of economic depression. He looked to ‘politicians to bring forward some scheme which would drive that wave back from the people.’ [5] Parkdale’s concrete bathing boxes, as with public works throughout the nation, played some part in that.

On a lighter note, Cremean, who officially opened the James T. Denyer Bathing Boxes in the place of Stanley Bruce, the Member of the House of Representatives [6], observed that two very important functions had occurred recently: the first, and lesser of the two, being the opening of the Sydney Harbour Bridge (March 1932). The second, and of greater importance, was the opening of the City of Mordialloc’s concrete bathing boxes. This no doubt raised a laugh from the assembled audience, who perhaps said privately that politicians rarely got things right.

The opening of the bathing boxes was supported by a display by Mordialloc and Mentone Life Saving Clubs accompanied by the Mentone Band. Later the clubs competed for a handsome trophy. Mordialloc club won the trophy, but Mentone was judged the victor of the march past. Later, the two clubs provided a demonstration of life saving techniques for the hundreds of spectators remaining on the beach, while the official guests enjoyed refreshments at the Café Pasadena in Mordialloc.

By the 1960s some people were questioning whether privately owned bathing boxes should be allowed on the public land located on the foreshore. In November of 1961 the Mordialloc Council notified owners with boxes between Charman Road and Mentone Pier that the structures had to be removed within thirty days. While some individual councillors were against this action, believing it was high handed, the decision of Council was that as bathing boxes deteriorated they should be demolished and no new permits issued. [7] 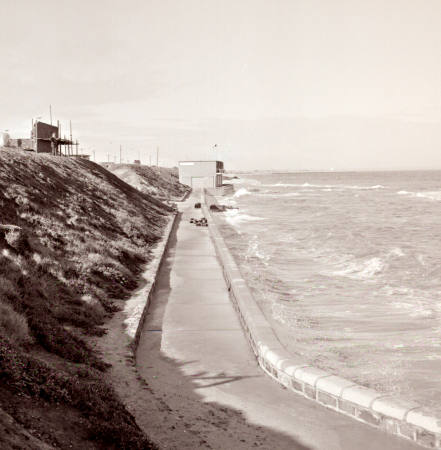 The concrete bathing boxes at Parkdale were somewhat different in that they were owned by the council and made available to the general public. However by the 1970s their condition had significantly deteriorated through being subjected to the influx of sand, the corroding influence of sea air and vandalism. As a consequence they were not being used by the general public in a way that was originally envisaged. The Council therefore decided to remove them and reconstitute the cliff face to prevent future erosion. Today the promenade along the beach front continues beyond the original site of the bathing boxes, opposite Antibes Street and below the car park. 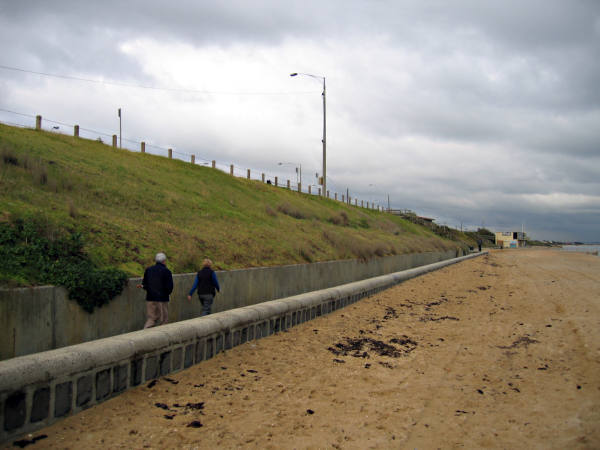