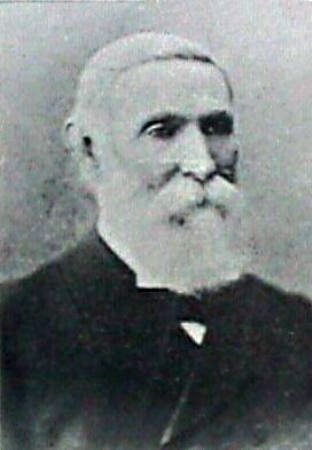 James Jamison purchased 140 acres of land in Cheltenham from William Rucker in July 1864 after arriving in the district five years earlier. On this land he built his house and became an influential figure in the community. He was elected to the Moorabbin Roads Board and later the Shire Council, was appointed as one of the first trustees of the local cemetery and took a significant role in the establishment and growth of the Wesleyan Church. Rigg in 1900 described him as a man ‘possessed of means, of good social position, of education, of gentlemanly, dignified appearance, and power to lead.’ [1]

James Jamison had an interesting life before arriving in Australia. He was born in the County of Tyrone, Ireland, on Christmas Day 1830 to John and Catherine (Nixon) Jamison. As a young man he spent four years in the United States of America before returning to Ireland for a brief period. He then travelled to Australia, arriving in Melbourne on August 1, 1854. After his arrival he went to Fryers Creek in the Mount Alexander diggings where large finds of alluvial gold had been discovered in late 1851. [2] Returning from the goldfields, he took up residence in North Melbourne. While there he married Mary Jane Patterson on 18 September 1856 according to the rites of the Wesleyan Methodist Church. The marriage took place at the residence of William McMahon of St Kilda. [3] James’occupation was given as ‘out of business’. Mary, at 33 years with four children, was the widow of James Patterson and daughter of George Keys, a pioneer of Keysbough. James at the time of his wedding was noted on the marriage certificate as being twenty four years of age. A few years after the wedding they moved to Cheltenham 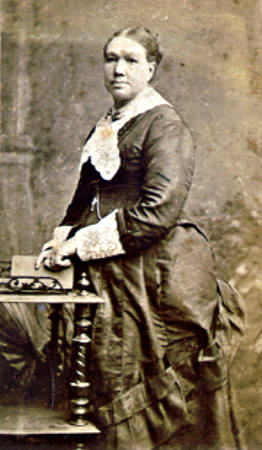 The 140 acres of land in Cheltenham purchased from William Rucker in 1864 was a triangular shaped block stretching from the north-east corner of what is today Chesterville Road and Nepean Highway to what would have been an extension of Highett Road. For this land he paid £1017/4/3. [4] It was here he erected his seven roomed house which he named “Maryfield". [5][6] Almost immediately he subdivided the remaining land and began selling it to investors and others who wanted land on which to build or farm. His first sale was a small piece of land at the intersection of Chesterville Road and Nepean Highway. This was sold to William Brown Treeby in July 1864 for forty pounds. A larger block further north on Nepean Highway and stretching through to Tennyson Street was sold for three hundred pounds on August 30, 1877. Sales continued in 1886, 1887 and 1888. [7] 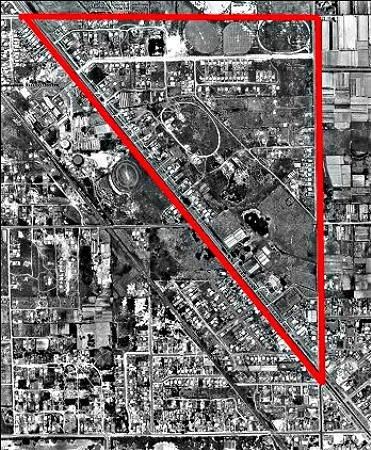 James Jamison was present at the meeting held at the Plough and Harrow Hotel on May 31, 1862 to discuss the creation of the Moorabbin Roads Board; the beginnings of local government in the district. Jamison was nominated for membership of the Board but failed to gather sufficient votes to gain election. However, he was successful at subsequent elections and served on the Board, from August 1864 to August 1866, and August 1868 to December 1869. From December 1878 to February 1879 he was a member of the Shire Council. In addition to his role on the Board and Council he was appointed as one of the first trustees of the South Moorabbin and Mordialloc General Cemetery, later renamed the Cheltenham Cemetery. He was present at the original meeting called to discuss the establishment of a cemetery. The meeting, chaired by Thomas Attenborough, was held at the Cheltenham Hotel. It was there that Jamison was elected as treasurer to the trust. [8] 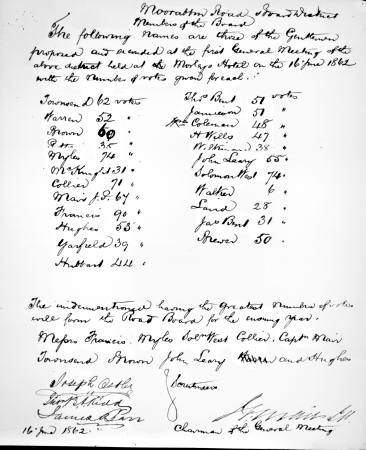 Results of election of members for members to Moorabbin Roads Board. James Jamison gained 51 votes. Courtesy City of Kingston.

Early in his life, as a young man in the United States of America, it is recorded that ‘he experienced conversion and entered upon a life-long consecration to the service of God.’ [9] This was the beginning of long service as a layman to the Wesleyan Church in Victoria. On his arrival in Victoria he was associated with the Wesleyan Church in Collins Street and later while on the goldfields at Fryers’ Creek he was involved in the erection of the first church and served as secretary of the trust. Returning to Melbourne he was a teacher in the Sabbath school at North Melbourne for three years before moving to Cheltenham with his new wife. There he served for twenty six years ‘as an active and useful church worker filling various offices open to laymen and dispensing a generous hospitality.’ [10]

Methodism officially arrived in Moorabbin in 1855 when the weatherboard church was built close to the corner of Wickham and Chapel roads on land purchased from Mr Forest. [11] [12] It was here in Salem Chapel that James Jamison and his wife worshipped. In December 1863 he was on the building committee for the new church and appointed as treasurer along with Mr Southcott. The foundation stone was laid in 1866 and the church opened two months later, on January 13, 1867 after an expenditure of £854/10/4.

In 1879 James and his wife returned to Ireland for a holiday but before they left they were farewelled by the Moorabbin church congregation. Charles Stone chaired the meeting and made the presentation telling his valued friend that he wished with all his heart the true meaning of the word, ‘God be with you.’ He then read the beautifully illuminated address, part of which said:

‘To J Jamison, Esq., Dear Sir –
We the undersigned being members and friends of the Wesleyan Church, Moorabbin, cannot permit you to leave us on your proposed visit to your native land, without some expression of our sincere attachment, and of the sense we have of your Christian character and devotion. For nearly twenty years as leader, trustee, or steward, you have taken an active and leaving part in all that pertains to the work and progress of our church. Your personal influence, genial spirit, and Christian consistency and faithfulness have served to advance and consolidate the cause of God in this locality and circuit. … Our prayers will follow you, and, we trust, that Mrs Jamison, Miss Jamison and yourself may be preserved in health and have a prosperous journey by the will of God; that your sojourn in the dear old country may be very pleasant and refreshing, and that you may soon return to us in the fullness of the blessing of the Gospel of Christ. ….’

Mr Jamison in responding said that under ordinary circumstances he was not a good speaker, and when he saw so many kind friends around him it was difficult to say anything, but he thanked them for their kind wishes. However, he did agree that during his stewardship the financial position of the church had achieved its most prosperous condition. He also indicated his hope that he would be spared to return to them. [13] Prior to leaving for Europe he held a clearing sale at his Cheltenham property. ‘Eight dairy cows, in milk and springing, six heifers, four horses (1 draught, two buggy, one pony), 30 tons of red-gum firewood (short lengths), a stack of good hay, ploughs, harrows, harness, garden tools, together with several lots from neighbours.’ The goods were sold by auction on the premises at Cheltenham by Rosling and Hyde. [14] Jamison also called for tenders for the remainder of fruit in his garden but he warned the highest nor any tender would not necessarily be accepted.

Besides his work for the local circuit Jamison was involved in the central activities of the church through his membership of Conference and his participation in various committees. For thirteen years he was the lay treasurer of the Home Mission Society, a position he held up until the time of his death. He was also a valued benefactor to the church. He gave £2050 to Queen’s College, at the University of Melbourne, part of which founded the Jamison Scholarship. Other bequests followed.

After leaving Cheltenham in 1885 James and his wife took up residence at Brighton but at the time of Mary Jane’s death, ten years later they were living in Royal Crescent, Armadale. In 1899 James Jamison was married to a spinster living in Essendon but born in Sydney. Mary Ann Schofield was 57 years old. They were married at Wesley Church, Melbourne. At the time of James’ death in 1906 from senile decay and bronchitis they were living at ‘Kiora’ in Goodall Street, Auburn. While living in Auburn he continued to be a staunch member of the Methodist Church worshipping at Hawthorn. He was buried in the Cheltenham Pioneer Cemetery with his first wife Mary Jane (Patterson) on January 1, 1907. Today there is a white marble column over the family grave where along with James, there are buried both his first and second wives, his son John George Jamison who was killed in a railway accident in 1881 and his daughter Catherine Black who died in 1930. In his will he left legacies to sons-in-law, Dr Black, and the Rev Tuckfield, the Methodist Church in New Street, Brighton, Methodist Home for Children at Cheltenham, Children’s Hospital, Melbourne Hospital, the Methodist Foreign Missions and the Methodist Home Mission. At the time of his death he owned property in Auburn, Parkville and Kensington as well as several properties in Carlton. His wife was granted the Auburn property for her lifetime provided she did not remarry and kept the property in good and substantial repair, ‘regularly paying all rates and taxes that applied.’ Subsequently the property was to pass to his daughter Catherine Bond Black and her heirs. Directions were left in the will instructing the executors to make provision for sewerage at the properties. Other James Jamison properties were to be held in trust for use by his daughter Catherine Bond Black (wife of Dr Archibald Grant Black) and step-daughters Mary Ann Tuckfield (wife of the Rev James Tuckfield) and Elizabeth Withington of Ballarat (wife of the Rev Samuel Withington). [15] [16] 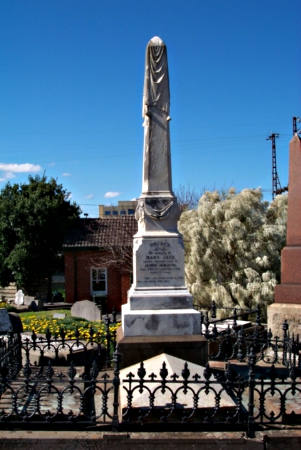 The Jamison family grave in the Cheltenham Pioneer Cemetery, 2000.