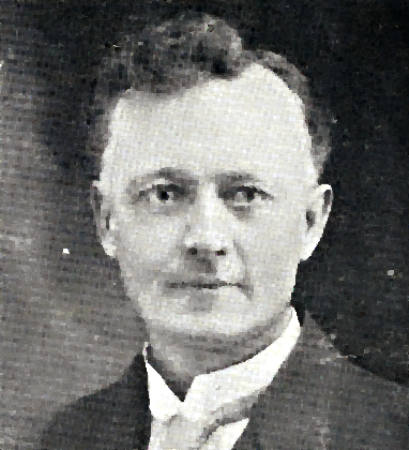 A school inspector described Edward Frederick William Brine (1885-1959) as a ‘fine citizen’. [1] That he was. A committed teacher and head teacher in schools throughout Victoria, spending 47 years in the Education Department, he made an important contribution to the communities in which he worked and lived: band conductor, member and chairman of the Mordialloc Carnival Committee raising money for community facilities, municipal councillor, and Mayor.

Edward Frederick William Brine was born at Kyneton on 2 February, 1885 to William Alexander Brine and Mary Matilda Brine (nee Fairchild). After completing his Merit Certificate he followed the route to a teaching career at that time: position as monitor at Tatura School; then pupil teacher in 1903, confirmed the next year. There he was identified as having ‘very good promise’ as a teacher. Subsequent inspectors’ reports consistently refer to his enthusiasm, energy, industriousness, effectiveness and keenness. While teaching he studied to gain Education Department qualifications necessary for promotion. Later he completed a Bachelor of Arts at Melbourne University.

In 1922 he was teaching at Mordialloc State School where it was noted that he displayed exceptional skill in the teaching of music, and that he had the full cooperation of his large class which he controlled with apparent ease. A year later it was recorded that he was a man with considerable ability and artistic tastes and that his teaching of singing was rated as excellent. But he was not rated at the same high level in the teaching of history and geography!

In February 1924 he was appointed as the temporary headmaster of the newly established Mordialloc and Chelsea High School. In that year he was described as an active, zealous teacher who secured a fine tone and public interest in his school. The Council of the school specially commended him for his excellent work as headmaster. [2] Brine’s address at the 1924 speech night provides an insight into the establishment of that school and the value of higher education. Five hundred and fifty students enrolled at the beginning of the year and had been placed in four classes. Within two days the new school was in ‘full swing’. While he acknowledged that some parents initially had some reservations about sending their children to the High School, believing that they might be better off if they remained at a State School and gained a Merit Certificate, he pointed out that students could also gain their Merit Certificate at the High School but, more importantly, they could go on to the Intermediate Certificate, which was even better, the Leaving Certificate, better still, and then a University degree, the best of all. [3]

Edward Brine left Mordialloc Chelsea High School in 1936 to become a lecturer at Melbourne Teachers’ College. He returned to the area and the ‘classroom’ in March 1937 as head teacher at Parkdale State School. After two years at Parkdale he was promoted to South Melbourne State School which in turn was followed by a transfer to Middle Park State School in 1942. It was from that school that he retired as a Special Class Head Teacher, the highest school level position in the Victorian Education Department at that time. His final assessment said, ‘Has given excellent service to state education.’ This was not the conclusion of his contribution however, as he returned to teaching two years later at Albert Park School as a temporary assistant to teach music. He remained in that role until the end of 1955. [4] During those three years his reports indicate he was highly successful in creating an appreciation for music among his pupils. [5] 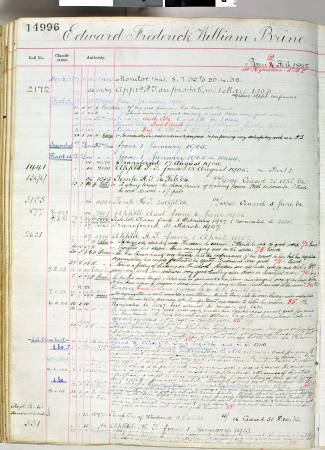 Official record of Edward Brine’s service as a member of the Victorian Education Department. Reproduced with permission of the Keeper of Records, Record Office, Victoria.

Edward Brine’s success and interest in music, while evident in his teaching, expressed itself more widely in the community when he became a significant figure in the re-creation of the Mordialloc Brass Band. While there were individual musicians living in and around Mordialloc, early efforts to create a band failed to meet with any ongoing success. [6] With the backing of the Progress Association a continuing band was finally formed in February 1923. Brine hunted up some old instruments with the assistance of A Horsfall and helped to form a committee. Brine took the role of bandmaster. [7]

A month later (March 1923) twenty-five members of Mordialloc band (together with eight other bandsmen from Moorabbin) were giving a public recital under the conductorship of Mr E Brine in the Beach Reserve. Apparently the playing of the selections, and more especially the hymns, was well appreciated by the large audience. Brine, it was reported, showed ‘a marked aptitude for his work, and the results he achieved with the band marked him as no mean conductor.’ [8]

Later that year, the Progress Association realised the necessity of having a suitable structure (a rotunda) for the band to play in. A conference of representatives of the Association and the Band Committee was called, the outcome of which was the decision to run a carnival and aquatic sports to raise the necessary funds to build a rotunda (October 9, 1923). [9] The carnival was a great success and together with its successors ultimately financing the building of the rotunda and other structures in the beach reserve. The ongoing operation of the carnival was administered by a large committee, with a sub-committee selected to manage the rotunda.

In 1925 the band rotunda was opened, during H C Phillips’ presidency of the Mordialloc Carnival Committee, and the twenty seven bandsmen were supplied with uniforms costing £150.

But three years later Brine was very critical of the way the rotunda was being managed. He raised with the Carnival Committee that the band was not represented on the management group of the rotunda, believing that if a bandsman was on the committee that person could inform the band of the arrangements being made for the use of the rotunda. Brine threatened that, if the band could not be represented, they would play elsewhere. The carnival committee, recognizing that the rotunda probably would not have been built without the existence of the band, saw the request as fair and reasonable. [10]

In January 1929 Edward Brine became president of the Mordialloc Carnival Committee, inviting Stanley Bruce, the Prime Minister of Australia, to declare the carnival open. [11] The local newspaper reported that Brine and his happy band were ‘raking in the nimble three penny bits, but of course, they are not saying nay to coins of larger value.’ [12]

Two years later, when the Great Depression was biting harder, the long serving Mordialloc councillor, Cr Bradshaw resigned. This caused a bi-election in the Mordialloc Ward. Edward Brine stood for the vacancy, as did friend and colleague on the Mordialloc Carnival Committee, George Wood. [13] The campaign was declared keen, clean and friendly. Brine was successful defeating his rival by twenty-six votes. [14] The count indicated that Brine received 264 votes to Brown’s 238.

Once on council Brine was quick to put forward issues of concern to residents living in his ward. Road maintenance and questions of sanitary arrangements in some properties were amongst those raised. One property, for example, had been divided into three, so forcing seven men and two women to use one convenience. This Brine considered unsatisfactory. All these issues raised were supported unanimously by his council colleagues and later successfully resolved by council. [15] In 1933/34 he served as Mayor of the municipality and had the honour of holding that position when the new council chambers were opened. His term completed, he continued to act as a councillor, representing the Mordialloc Ward, until 1941.

Edward Brine’s service to the district ceased in 1942 when he, with his wife, Beatrice (nee Spiers), took up residence in McGregor Street, Middle Park, to be closer to his place of employment at Middle Park State School. He died at that address in 1959. He was 74 years of age at the time of his death.