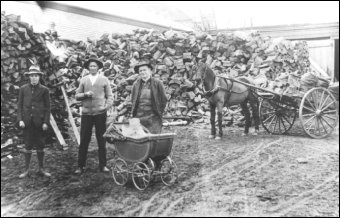 Percy Wilson was the woodman at Cheltenham for many years. At first his wood yard was opposite the Memorial Hall and the Fire Brigade on Point Nepean Road but later he moved to a site next to Straightway Motors on Nepean Highway where the Tax Office building is today . Norman Wilson, Percy’s son, recalled the house where he was born opposite the Memorial Hall, "It used to be called ‘Luna Park’ because with lath and plaster walls, and hessian and wall paper, when the wind blew the thing used to belly in and out. It was just an old old single fronted place. Dad sold the property to Doug Clarke who started Clarke Rubber in our old garage. He made rubber mats out of old tyres.

"With about twelve hundred customers on our wood round and a thousand customers on an ice round which was started during the war, we were very busy people. In the last year of our operation we sold about five thousand ton weight of wood. Dad had three trucks and at his peak employed five people. When we delivered the wood, you might have eight customers on a load. You would drop the wood off and Dad would follow us around collecting the money. We would deliver five hundredweight and cart it in. The worst thing was carrying the mallee roots on your back in a chaff bag because they would dig in a bit. 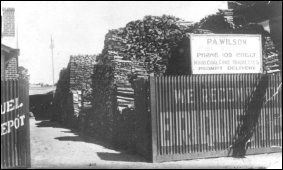 "In the forties ice was coming in vogue and people were getting ice chests, the old Eskie ice chests, wooden ones with galvanised steel linings inside. We would carry the ice in to the customer in proper canvas carrying bags. A lot of people used hessian bags. We would take the old ice out of the chest if there was any left and put the new block in and pack the old ice round it. It was heavy work. Some times you would be carrying a hundred weight of ice at a time on your shoulder. Kids would gather around the back of the truck to collect chips of ice to suck. They thought it was something special on a hot day.

"On the ice round we would start work at half past two in the morning and go over and get the ice. We would come home and have breakfast before starting to deliver about five o’clock. At first all the ice came from Ralphs in Hampton, the dairy complex over there. Finally, we went to Simons down at Parkdale. They had an ice works just near the Parkdale station in Parkers Road. We would probably load up about four ton of ice. They were long block. They used to run them through a saw and cut them into four. They would score them and when you got the ice pick you would split them according to what the customer wanted.

"We would finish the ice round about one o’clock in the afternoon and then we would slip the ice boxes off onto racks using rollers and put the sides on the truck and go up to the railway siding to unload wood from the railway trucks. Sometimes we had thirteen railway trucks full of wood up there waiting to be unloaded. Each truck had about twelve ton of firewood on it. Red gum came from up Leitchville and Cohuna way. The mallee roots came from Chinkapook, Manangatang, Wirramah and Chillingollah all up around the Mallee. They were magnificent burners.

"Some days I would start work at half past seven and get home at quarter to nine at night only to get up at half past two the next morning. It was heavy going. You handled ice all the morning and in the afternoon you would be unloading and stacking the rough mallee roots with your bare hands. For this work I was paid six pound ten shillings a week.

"All the ice round was in Cheltenham. The roads were terrible in those days. Unmade roads were everywhere around Cheltenham. I remember in Walingford Street was an unmade road. Dad left his truck there for two days because it got bogged and he couldn’t get it out. Another time down in Wells Road, Beaumaris in trying to cut across a paddock he finished up with the tray of the truck in the mud. It was very swampy down there.

"Dad sold out in 1955 and went to manage holiday flats at Bright until he died."