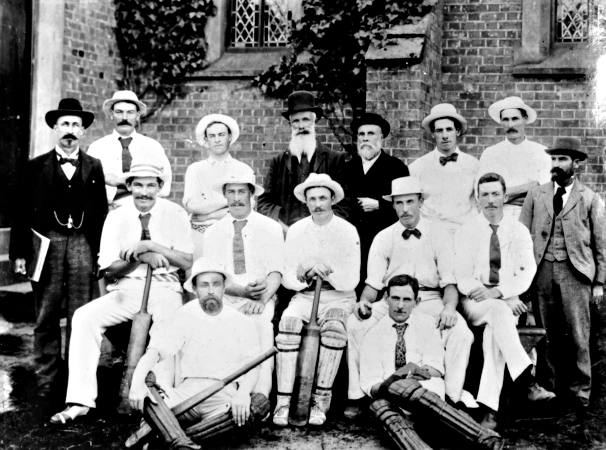 The early records of the Cheltenham Cricket Club have been lost but a note in the front of the Minute Book for 1919 indicates that the first meeting was held at the Bruton House in 1872. [1] J. Martin was President, W. McKnight Secretary, and J. Monk Captain of the club. Also present were W. Bruton, W. Organ, D. Organ and R. Woff. Other information, although sparse about the early days of the club, can be gleaned from brief reports published in local newspapers. While at first the club was known as the Cheltenham Cricket Club by February 1875 it had adopted the name Rising Star Cricket Club and retained this name until 1886. [2]

Several of the individuals present at that first meeting became active players in the club. The occasional reports in the local newspaper frequently mentioned W. Woff, R. Woff, J. Monk, W. Organ, R. Patterson, W. McKnight and J. Brownfield amongst the best bats and top scorers. However, high scores were unusual in the early days. In a match against South Brighton Excelsior in 1875, D. Organ was the top scorer for Rising Star with a score of 11 runs. There were several players in that match who scored a ‘duck’. [3] A match against the same club, but two years later, again saw low scores. Top scorers for Rising Star were Brownfield with 8 not out, W. Woff with 2 and 9 not out and R. Woff 1 and 8 not out. Rising Star were the match winners with 21 and two wickets down for 24 against the losers score of 20 and 22. [4] Scores were higher for some players when Rising Star met Domain. W. Organ scored 25 in the first innings of the match.

Monk and the Woff brothers consistently appear in reports as the club’s top bowlers. In the match against Star of Moorabbin in January 1875 R. Woff took six wickets in two innings, his brother took three and J. Monk collected seven wickets. [5] At the clubs annual dinner in May 1876 the ball for the best bowling average was won by R. Woff and another was presented to J. Monk for the second best average for the season. [6] In the match played between Rising Star and East Brighton J. Brownfield joined the two Woff brothers as the best bowlers. [7]

In the secretary’s report for the 1875/76 season he congratulated the teams on their successes. Two teams had been fielded during the season. The first team played eleven matches winning six, losing three and drawing two while the second team played two matches winning one and losing one. W. McKnight won the bat for the best batting average with W Woff coming second. The season had started with nineteen members, two of whom left the colony soon after but twelve new members joined later. [8]

The eighth annual meeting of the club held in the Protestant Hall in August 1880 and it was there the secretary reported that the first eleven had played twelve matches during the season winning six, losing four and drawing four games. The second eleven played nine matches winning four, losing one, and drawing four. J. Roberts had the best batting performance with an average of 23 runs to the innings. T. Brownfield won the best bowling average with 4.5 runs to the wicket. J. Roberts won the prize for the highest number of runs in a match, getting 81 runs and G. Organ in the second eleven with 38 runs. Officers of the club were elected for the following season:- Patron, the Hon W. J. Clarke, MLC; President, Mr Chandler; Secretary, W. McKnight; Captain, J. Roberts; Vice captain, W. Woff; Second eleven Captain J. Gouldthorpe; Vice captain, W. McKnight; Committee, Messrs W. Woff, J. Monk, J. D. Morris, T. Irvine, and J. Louden. The big announcement at the meeting was the fact that the club had been successful in getting a ground permanently reserved for the club. This was achieved despite strong opposition. [9]

The location of the ground on which Rising Star first played in Cheltenham is unknown. [10] However by 1880 the club secretary was seeking six acres of land in the Cheltenham Park. McKnight informed the Shire Council that a deputation from the club was meeting with the relevant government Minister and asked the council to forward a letter of recommendation to the Minister. Some councillors were offended by this request as the Council, in whom the management of the Cheltenham Park was vested, had already agreed to the club’s request. [11] Thus in the minds of the councillors the request was unnecessary and questioned the authority of the council. [12] The following month the Council received a letter from the Secretary of Lands indicating that the Rising Star Cricket Club had made a request for about six acres of land in the Cheltenham Park to construct a cricket ground and proposed that three trustees be appointed. The Secretary for Lands asked if the Council had any objections. Cr Ward moved that the application for a letter of recommendation be apposed and was supported by Cr Bloxsidge. Cr Bent and Cr Harston supported the club being given rights to the ground as it would require the expenditure of a considerable amount of money and effort to get it into a suitable condition for cricket. [13] Subsequently Cr Ward explained that he and Cr Bloxsidge did not oppose the cricketers getting a portion of the Cheltenham Park, indeed he pointed out, it was on the strong recommendation of Cr Bloxsidge that an area in the park was originally granted. What he objected to was the underhand manner in which the cricketers had gone to the Government, an action in his view that was ‘anything but gentlemanly.’ [14] In December 1880 the Council received a letter from the Land’s Department noting that Messrs W. Ward, J. Jamison and W. McKnight had been appointed trustees for the cricket ground at Cheltenham and suggested that regulations be drawn up regarding management. [15]

Some twenty seven years later, after the club had surrendered the Cheltenham Park ground and was looking for the creation of a new ground at the Cheltenham Recreation Reserve, James Monk recalled that a lot of ‘old buffers had put a lot of work into that park.’ Cr Brownfield recalled playing there when he was a youngster and claimed he had put in some ‘hard graft too.’ [16]

Veteran writing in the Southern Cross in 1881 pointed out that while the Rising Star Club had some fine players they did not play matches regularly because the ground in the Cheltenham Park was some distance from the railway station. Most of the best players he suggested also played with other clubs. James Roberts played for East Brighton and in Veteran’s assessment was the best all round man in the district. McQueen who also played for East Brighton was a good wicket keeper but as a bat a terrible slogger. R. Woff who was a fine bat, a good bowler and fielder played for Brighton and next to Roberts was the best all round man in the club. Veteran went on commenting on the performance of other members of the club including W. Woff who was a fine bat needing practice, R. Mills a great sticker and fine long stop, W. Organ a really good bowler, as a batsman a sticker, L. Lowden once the terror of Brighton but was no longer dependable, J. Roberts a fine left handed bowler with a good leg break, poor bat and slow in the field but as he ages without doubt one of the coming men, T. Irvine, ‘his joints want oiling.’ William McKnight the club secretary was noted as being energetic and had been untiring in his efforts to promote the welfare of the club over many years. [17]

The comments of Veteran were not well received by some individuals. Red and White writing in the following issue of the Brighton Southern Cross was critical of Veteran’s assessments of Rising Star team members and questioned the basis upon which he made his judgements. ‘If he puts himself up as judge of cricket, he should visit the grounds and watch the play for himself, and not depend on any private member of a club, who may be partial to one player more than another, the same as has been done in our case. I hope that if Veteran cannot give a fair report of all the team, and not give the fault of one player more than another, that he will in future leave our club out of his criticism.’ [18]

Some time later in his response to his critics from Rising Star and other local clubs, Veteran wrote, ‘It is best on mature consideration to ignore all correspondents, because a bitter feeling is likely to be engendered thereby, and whatever my failings may be as a writer, I have been actuated by one desire, viz. – To point out faults, especially in young players, and if at times I have been rough, the child has been chastised to prevent it being spoilt. Of course, in all communities there are thin-skinned people who enjoy a joke so long as others are hit; thrust home the truth upon themselves, they don’t like it a little bit, and like all youngsters, feel more frightened than hurt, and I am satisfied at leaving my case in the hands of unprejudiced cricketers and an enlightened public, ignoring the opinions of a “select few” who, not content with fair criticism, indulge in maliciousness as contemptible as it is uncalled for.’

During the 1881 season Veteran reported the Rising Star club entered for the Boyle and Scott Challenge Cup but fared badly. They were easily beaten by North Fitzroy, partly because some of the team had not turned up on the second day of play. Another explanation was the fact that the match was played on turf and as Veteran wrote the team was more accustomed to playing on coconut matting where they shined.

Chatterer taking up the task of reporting the cricket in the Brighton Southern Crosss wrote of the match between the Esplanade and Rising Star played at Elsternwick in February 1882. He praised the effort to the Rising Star team who ‘only lost four wickets for a total of a century and a half or thereabouts.’ He then singled out the contribution of Roberts, Woff, Mills and Brownfield whom he said were ‘very old friends of local cricketers and well known. The styles of these players are too well known for me here to recapitulate them.’ [19]

In 1887 the fifteenth annual meeting of the Cheltenham Cricket Club, chaired by William McKnight was held in the Old Protestant Hall. [20] The original name of Rising Star for the club had been replaced. Two years earlier a newspaper reference to the club used the new name.[21] This is the name the club has continued to use to the present day but acknowledges that its early history was under the banner of Rising Star but traced its beginnings back to 1872. 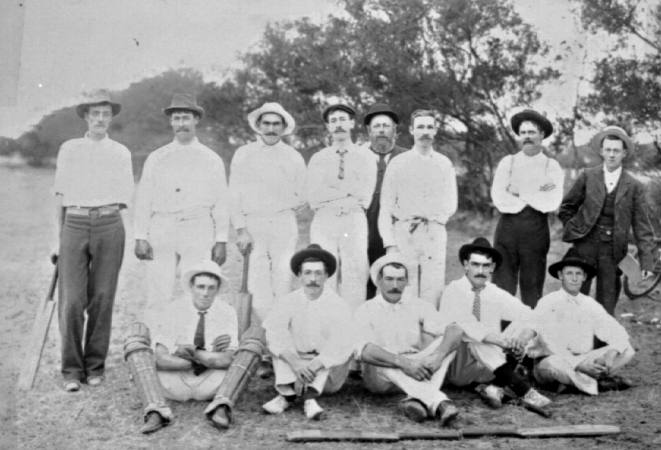