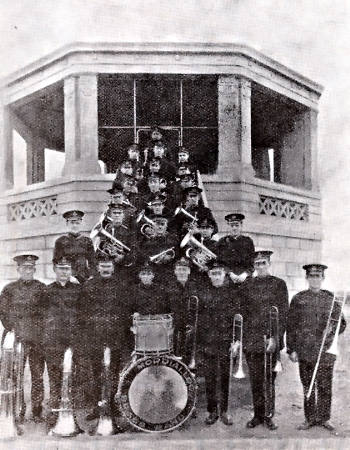 The creation of a town band in Mordialloc was a dream held by some individuals but it took time before it became a reality. An early effort was made prior to 1890 and subsequent attempts occurred in 1890 and 1914, but it was not until 1923 that a more lasting resolution was achieved.

Before 1890 a band had been formed and instruments bought but the organisation did not last long. Most of the band members left the district leaving behind a debt that had to be liquidated by the people of Mordialloc. To raise the money a concert was organised. [1] The concert, involving individuals drawn from the ‘metropolitan musical world’, was held on 13 April 1890 at the Mordialloc Mechanics’ Institute. While the organisers were hoping for a ‘bumper attendance’ this was not to be. Attendance was described as ‘thin’. A reporter of a local newspaper deplored the lack of support by local people and called upon them to assist the committee in establishing a town band. He reminded his readers that Mordialloc had an excellent pier with beautiful grassy reserves bordering on the beach ‘which could be made doubly attractive by a well trained band discoursing sweet music thereon on moonlight summer nights.’ [2]

A committee was formed to manage the repayment of the debt and to re-establish the band. In a short time, with only a few pounds in arrears, the committee set about enrolling instrumentalists. This took place at the Mordialloc Coffee Palace at the beginning of May 1890. Thirteen individuals responded to the invitation and were allotted instruments. This was seen as an excellent result and the beginnings of a band that would be able to make ‘creditable appearances in public.’ [3] A week later the committee announced that Mr A Langley of Collingwood had been appointed as bandmaster. Because of the appointment of a man with such an excellent reputation as a bandmaster, the committee was confident that in a few months the band would be making public appearances. [4] 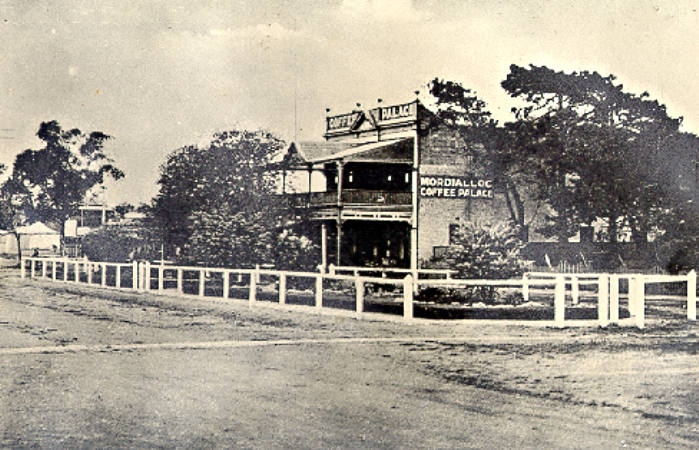 The level of success achieved by the 1890 band and the period of time over which it functioned are not known. However, in August 1913, stimulated by the arrival of some experienced bandsmen in the district, a meeting was convened by Mr Schmidt to discuss the possibility of forming a band. Held at Gilmour’s, those attending agreed it was possible and decided to work towards the formation of a Mordialloc Brass Band. To this end a public meeting was held in the Mechanic’s Lodge Room. Cr D White, a local councillor, acted as chairman. [5]

After an introduction by Cr White the meeting resolved to take the necessary steps to form a band to be known as the Mordialloc Brass Band. Immediately a committee was elected to facilitate implementation. J Gilmore and D White were elected as vice presidents, S Hobson secretary, H Webb treasurer with Messrs Jones, Horsfall, Judd, Wilson and Cooper forming the executive committee. The position of president was not filled as none of the people nominated agreed to accept the role. Mr Schmidt was unanimously elected as bandmaster. [6] By October 1913 arrangements for the use of the football pavilion for practice had been concluded and plans were being made for the purchase of instruments. [7]

The first public appearance of the band occurred at the Picture Gardens in March 1914. [8] The proprietors of the venue agreed to give fifty percent of the income from ticket sales to the band. The result was considered very satisfactory as £4 was added to band funds. In addition, the organisers were delighted because a large audience appreciated the five selections presented.

Nineteen fourteen saw the outbreak of war in Europe. Australia rallied in support of Britain with many men volunteering to fight against Germany and her allies. The small Mordialloc community was no exception with many local men volunteering for military service. With the loss of bandsmen the Mordialloc Brass Band ceased to function during the period of the war [9]

With the conclusion of the war and life returning to normal in Mordialloc, the thoughts of individuals turned once more to the formation of a band. The Progress Association called a meeting of residents in December 1922 to consider the question, ‘Was a band wanted?’ The response to the invitation was poor but two people volunteers to canvass for members.

On January 18, 1923 a large number of Progress Association members and friends confirmed the decision to form a brass band in Mordialloc to be known as the Mordialloc District Band. Mr Nicholas was elected president of the new group. While no bandmaster was named it was expected the Edward Brine would accept the role. [10] It was announced that the Progress Association held in trust seven instruments consisting of one bass, one euphonium, two baritones, one tenor horn, one trombone and a bass drum. To bring this number to fifteen Mr Taylor estimated a cost of £80. [11]

The debut of the reformed band took place in the Beach Reserve on 18 March 1923. One local newspaper had urged its readers to attend because the band was ‘the means of enlivening an otherwise dull day.’ [13] After only four practices under the direction of bandmaster Brine, the band delivered a performance that was rated as excellent. Brine was described as a man who showed marked aptitude for his work and the performance of the band revealed him to be ‘no mean conductor’. [14] About thirty three bandsmen took part and of these twenty five were members of the Mordialloc Band. (The remainder were from the Moorabbin Band.) Both Crs Bradshaw and Gilmour spoke to the audience calling for subscriptions to the band, pointing out that instruments, music and other accoutrements had to be purchased. As a result of a collection £7/4/- was raised. [15]

A little more than fifteen months later, at a performance of the band and visiting artists, the president of the Progress Association expressed his disappointment at the apathy of the local townspeople. He warned them that if they didn’t want to lose their band they would have to show more interest. Brine, the bandmaster, agreed. He told the audience that half of the members of the band were playing their own instruments, and with the exception of two good instruments the others were using what he called, ‘tin pot instruments’. They had been purchased indiscriminately when the band was formed in the expectation that better instruments would be bought once the band was established. This had not happened. Uniforms were also required. With the support of some ladies the band had been equipped with caps but uniforms were deemed to be necessary. [16]

Bandmaster Brine also saw the need for a facility where the band could entertain the public. The Mordialloc Progress Society took up this idea, calling a meeting of representatives of the association and the band to explore means of financing Brine’s vision of a rotunda. Out of this meeting came the formation of the Carnival Committee and the idea of a carnival and aquatic sports to raise the money not only for a rotunda but for the beautification of the Mordialloc foreshore. [17]

At the beginning of 1925 the band approached the Mordialloc council for permission to extend the Mordialloc Carnival from 2 to 7 February in order to raise money for the band. Although the request was granted, in the discussion of the request Cr Denyer expressed the view that the band was too parochial. He believed if the council was to subsidise the band its services should be more widely spread. In the band’s defence the Mayor pointed out that members had marched from the Mentone Station to the Skating Rink where they gave a performance in aid of Hospital Sunday to very few people. ‘Bandsmen were reluctant to devote their time and talent to events poorly attended,’ he said. [18]

At the annual meeting of 1925 the band’s treasurer revealed that income exceeded expenditure by £3/18/3. The major sources of income were monies received from carnival proceeds, members’ subscriptions, collections and proceeds from a bazaar. It was the latter event that raised the most money. The largest expense for the year was the purchase of new uniforms costing £173/1/2. The treasurer pointed out that for some time the band had to appeal to the public for financial assistance and suggested people should be encouraged to donate small sums on a weekly basis [19]. The mayor and president of the band reminded people that the band was their band and with a little financial assistance they would see the band playing in competitions and ‘thereby placing Mordialloc on the map.’ [20] Raising funds for the band continued to be a difficult task.

By 1927 the band was giving regular recitals in the rotunda but later in the year, during the winter months, they moved to local halls. With the onset of warmer weather the band was actively contributing to charity events both within and outside the City of Mordialloc, including the Lord Mayor’s Hospital Sunday Appeal at Chelsea. [21]

The issue of money was again raised in 1928 by their colleagues in the Mentone Citizens Band when they approached the council for assistance. They were experiencing difficulties in raising sufficient funds to pay their bandmaster. The councillors were divided on whether they should subsidise the City’s bands. Councillors Edwards and Blanche were supportive but the Mayor, Cr White, pointed out there were many groups interested in music who were supplying the public with pleasure and in his view if members were not prepared to ‘put their hands in their pockets to pay their bandmaster they were not very interested. Others insisted the bands should be informed there was no money. The notion of support was lost. [22] In 1933 the possibility of amalgamating the band with the Mentone Citizens’ Band was canvassed as a means of alleviating the situation, but this was rejected by the players. [23]

A few years earlier the band was playing in the Main Street of Mordialloc and despite the lack of a large number of people they were getting reasonable contributions. [24] In the same month the band provided a concert in the Mechanics’ Hall that was filled to capacity. [25] Plans were made to invite another band to join them in a recital at the Paramount Theatre and the ladies committee was organizing a dance to raise funds. At the beginning of 1931 while not playing in the rotunda the band was giving performances in a variety of other venues. They went to Mentone to assist in a massed band performance held there and took part in a marching competition which they won. [26] Evening recitals were presented by the band and to attract those individuals not drawn to the music an opportunity to play euchre and bridge was provided. Prizes to the value of £1/1/- were offered together with supper for 1/- entrance fee. [27] 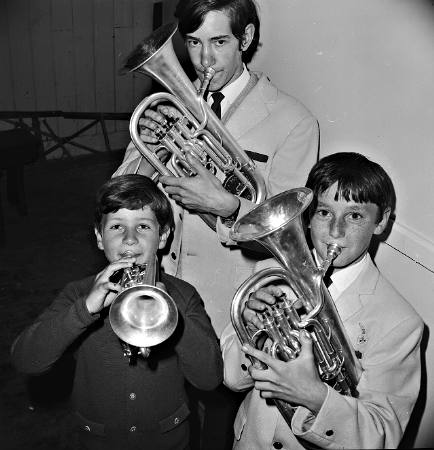 Over the next seventy years the band continued to have its successes and disappointments. A high point was achieved in the 1970s when the band received their highest league ranking of B Grade. [28] It was also in the 70s that the number of bandsmen fell following the departure of the bandmaster. Only a small number remained to carry on but by 2003 numbers were restored with about 30 participating bandsmen along with a training band of approximately twenty beginners.