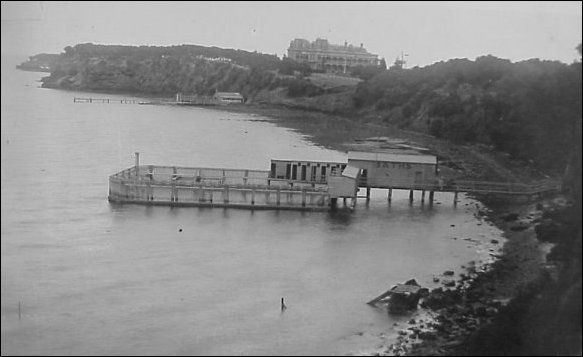 In 1890’s baths were the way most people gained access to the waters of Port Phillip Bay. People were actively discouraged from entering the water directly from the sandy beach. A bye law of the Shire of Moorabbin prohibited people above the age of twelve years using the beach for purposes of bathing within forty chains of any public baths. Beyond that distance they were not permitted to use the beach between the hours of seven in the morning and eight in the evening from October to April unless, if male, they wore "trunks of close texture and if female a full bathing costume." [1]

The Shire of Moorabbin had responsibility for baths at Sandringham, Brighton Beach, Mentone and Mordialloc and there were moves in the 1890’s to establish a similar facility at Beaumaris. Mrs Finlay of the Beaumaris Hotel offered to pay £20 per year if her boarders were able to use the baths free of charge. John Keys, the Shire Secretary and Engineer believed that if erected the baths could be leased for an additional £15. [2] Some months later, after interviewing a number of landowners in the area, Cr Smith reported that a substantial subscription would be raised towards the construction of the baths and recommended that plans and specifications be prepared and tenders called for their erection. [3]

The Shire Engineer inspected the site and was informed that there was a depth of five feet of water only a short distance from the shore. (He did not hire a boat to check this for himself.) In the absence of detailed plans he informed the Council, it was impossible to provide precise costs of building a facility but believed a ring fence for baths of 100 feet square would be £500 with boxes and quarters costing £100 to £250 according to the nature of the provisions made. While he acknowledged some people were saying the baths could be built more cheaply he thought this unwise "as the first gale would wash it away." In his view, "if the Baths are to be erected they should be substantial." [4]

Taking this advice, the Council agreed it would accept a tender to build the baths at Beaumaris, provided the costs were considered reasonable and that ratepayers contributed £100 towards them. [5] Three weeks later the Shire Engineer reported to Council that he, together with the, Councillors Burgess (President) Smith, Benjamin, Penny, Born, Barnett, Mills and Clements inspected a ship, the Hilaria to determine its suitability for conversion as a Bathing Ship to be moored at Beaumaris.

The Hilaria, a wooden ship of 1590 tons was gutted by fire the previous year and was lying at that time in Saltwater River, the early name for the Maribyrnong Creek. The fire had erupted in the hull of the ship amongst cases of kerosene while her cargo was being unloaded at Port Melbourne. Initial efforts to douse the flames by the fire brigade were thought to have been successful but the fire was again evident the next day. The solution proposed was for the naval brigade to sink the ship using a ninety pound gun mounted on a barge but this also failed. Williams and Serle reported that finally "the navy exploded some dynamite under her bows which flung her bodily into the air dropping her fore and main masts down over the pier." [6]

Initially the Council agreed to the idea of a bathing ship at Beaumaris and offered Mr Phillips £350 if he would fit out the ship appropriately and fix it in a position determined by John Keys, the Shire Engineer. Keys proposed the ship be placed 250 feet from the shore with a linking gangway. Although the original motion at a meeting of Council was carried, not all councillors were enthusiastic about the proposal. Five councillors had attempted to have the whole matter squashed. [7] However the proposal did not proceed. The reasons for this can only be guessed at. The Engineer’s report to Council on November 2, 1896 noted that Mr Phillips had accepted, "after some demur" Council specifications but required an advance of £100 to enable him to employ some men to proceed with the fitting of the ship. Council resolved to defer considering the Engineer’s report for one month and agreed that the purchase of the ship should also be postponed. In December Council once again deferred the matter but on January 18, 1896 agreed that Mr Phillips be informed that the Council had abandoned the idea of purchasing the Hilaria. Mr Phillips clearly was not pleased and threatened legal action through his solicitors Regan & Cunningham. Council in turn appointed Lawson & Jardine to represent it. [8] Whether the case went to court or how it was resolved is not known. Nevertheless pressures on the Council to provide a bathing facility at Beaumaris persisted. [9]

In May 1902 the Beaumaris Baths were completed and tenders were called from people interested in leasing the facility. But before they could be opened rocks lying on the floor of the bay had to be removed so a diver was employed for four days to undertake the task. When Council gave permission to employ a diver it also asked the Shire Engineer to report on the cost of building two additional rooms at the baths. Following his report the Council accepted the tender from J E Robbins for the erection of two rooms, each 12 feet by 10 feet for the sum of £85. But Robbins failed to undertake the tender and as a consequence forfeited £5. [10] Early in the following year the tender of Charles Keefer at £105 for the two rooms was accepted. It was also Keefer who was successful in leasing the baths at a rent of £15 for the first year. [11]

At the same time as Council accepted Keefer’s tender to lease the baths Bye law 27 was passed setting out the conditions under which the baths would operate. [12] The baths were to be known as the Beaumaris Baths and were to be open to the public from daylight until dark on the payment of set fees. An annual ticket for one person was to cost £1 or a monthly ticket five shillings therefore providing a financial incentive for those wishing to have access throughout the year to take an annual subscription. A single bath was available for three pence. There was no provision for mixed bathing. The baths were available to men when the red flag was flying from daylight to 8.30 am., from 1 pm. to 3 pm. and from 5.00 pm. until dark. The ladies could attend from 8.30 am to 1 pm and from 3 pm to 5 pm when the white flag was flying. 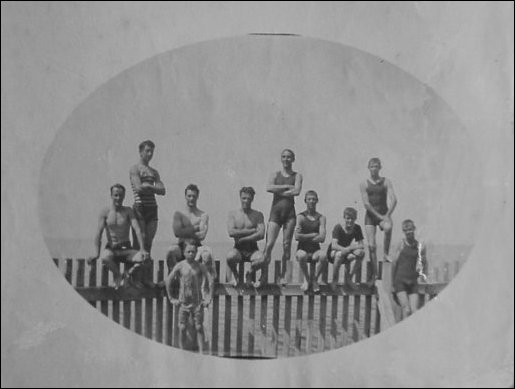 Sitting on the fence at Beaumaris Baths.

Obscene language, defacing walls or doors or committing a nuisance were barred behaviours. Smoking was only allowed in ‘apartments set aside for that purpose’, dogs were prohibited and no person under the influence of liquor was to be admitted. Finally no male person above the age of twelve was to bathe at Beaumaris unless he was clothed in trunks of ‘close texture’. No guidance was provided regarding apparel for females, probably because they observed appropriate decorum in their dress. Not so the males! Mr A S Hutchinson was complaining to the Council about nude bathing at the Beaumaris Baths shortly after they opened. [13]

Charles Keefer continued to manage the Beaumaris Baths for many years as well as hiring boats from a jetty he constructed nearby. It was on November 30, 1934 that this part of Port Phillip Bay experienced a devastating storm which destroyed the baths and severely damaged other facilities along the shore line. The baths were never rebuilt.