The Murrells and Garryowen: A Mentone Tragedy 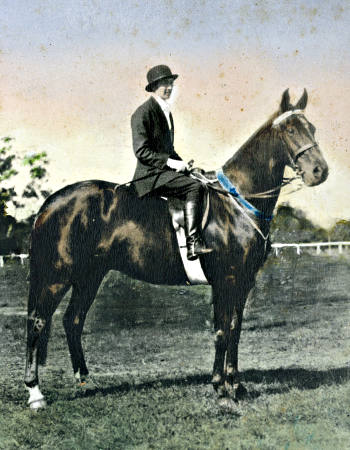 The tragic Garryowen story really began in the early 1900s when a little girl fell in love with horses. Violet Farmer was born in 1904. She was a restless baby at night, often disturbing her parents so much that her desperate father, Harry, a Caulfield racehorse trainer, would take her out to the stables. There he would put her on a horse’s back where she seemed to become more tranquil and ready to sleep.

Violet loved horses so much she was given a black pony when she was just seven years old. She learned to ride this pet pony and even brought it into the kitchen for ‘horse snacks’. By the time she was just into her teens Violet was riding her father’s racehorses in track work at Caulfield. The Red Cross ran a fund-raising carnival at Caulfield in 1918 where Violet, aged only fourteen, won an open event against the men. During the Great War Violet joined the Purple Cross Society, an organisation which raised money for animal welfare, particularly for horses which were involved in their thousands on the battlefields in Europe and elsewhere. Violet offered children pony rides for a small fee to make her contribution for that cause. She attended the Melbourne Church of England Girls’ Grammar School, but in 1920 at sixteen she left school to work with horses as a full time stable worker and competitor in country racing as well as in gymkhana events.

Violet Farmer soon made an impression in the equestrian world. In 1921 she first rode against professional jockeys at a Pakenham meeting and the following year she booted home four winners and two second-place-getters at the Clyde picnic races. As a female she had to get special permission to ride at these meetings and was allowed to ride only in flat races. Often riding horses trained by her father, she was very successful at country race meetings, in one season during the mid-twenties winning 17 events from 19 starts. Her riding style was considered to be daring and fearless. Apart from race-riding Violet travelled around Victoria to country Shows and gymkhanas throughout the 1920s. At these she became recognised as the champion female rider with success at Show Jumping, Steeplechasing, Point to Point, Hunting and Hacking, all part of the equestrian programs at Shows and gymkhanas. There was no official title but Violet was acknowledged to be Victoria’s top equestrienne, with a claim to the national championship as well because of her success in NSW, especially at the Royal Sydney Show. Dozens of blue sashes and first prize certificates bore her name.

Even with all this success Violet Farmer remained dissatisfied with her career. She felt that her skill as a rider entitled her to compete at city race meetings, and even in what we now call ‘group one’ races where the best horses and the champion jockeys do battle. In the 1920s the VRC rules prohibited female riders from competing in the ‘metropolitan’ race meetings of that time, those at Flemington, Caulfield, Moonee Valley, Mentone, Epsom and Williamstown. During her work in racing stables Violet met a well-known jumps jockey, Bill Murrell, whose aim was to become a trainer when his riding career tapered off. Violet and Bill fell in love and were married in 1927. Bill supported her in the campaign to become a rider at city meetings and he also tutored her in riding over the hurdles so that she became more proficient in the Show Jumping events. Eventually Bill set up as a trainer in Mentone where he and Violet occupied a Latrobe Street house that had stables adjacent in the large rear section of the block. Violet and Bill walked horses to the Mentone course in Lower Dandenong Road where they both rode track work. The couple became prominent and well-respected members of the local community. This was ensured because of Bill’s racing successes and Violet’s continued coverage in the newspapers where reporters wrote about her being an intrepid and fearless equestrienne. 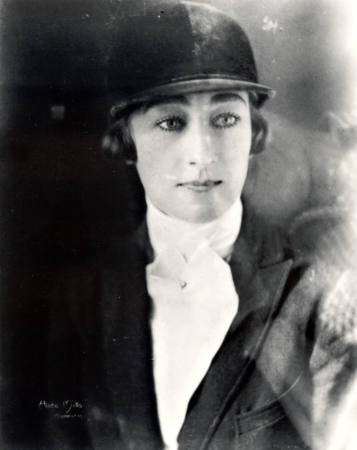 In 1929 Violet was the recipient of a generous gift. She became the owner of a handsome bay gelding called Garryowen. A family friend, William Jones, a veterinarian and owner of a horse export business, gave the horse to her. He commented that he selected Garryowen because the horse seemed ‘special’ and likely to be perfect for Violet. Jones was right. Violet bonded with Garryowen and for the next five years the two of them won over 200 prizes at Shows and gymkhanas. The successes included first place at the Melbourne Royal Show three years in a row (1931-3). Garryowen came from the district north of Albury, NSW, and his name was probably copied from that of the chronicler who penned some early Victorian history in the period 1835-52.

The Murrells continued their training and other equestrian activities through the early 1930s until a tragedy occurred that was destined to etch their names, and that of Garryowen, into the annals of Victorian sporting history. On the evening of Friday, 23rd March 1934, Violet and Bill retired for the night having ensured their horses, Garryowen and Piquant, were safely in the stable at the back of the residence. At about 2 a.m. the next morning Violet was wakened by the screams of horses and she rushed out to see the stable on fire. She ran into the inferno in the vain hope of pulling the two animals out, but her nightclothes caught fire and she suffered terrible burns. By this time Bill had hurried out and into the fire where he dragged Violet from the blaze and carried her to the house. Both of them collapsed as neighbours arrived, called the fire brigade, and tried to comfort the couple who were in agony from extensive burns. Firemen from Cheltenham and Mentone were too late to prevent the stables being completely destroyed as Garryowen and Piquant received fatal burns. 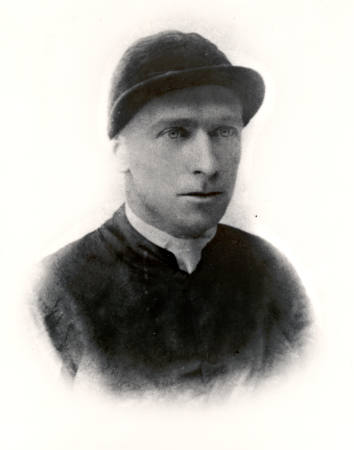 Both Violet and Bill were taken to Melbourne Hospital, their burns serious and life threatening. Violet was given a blood transfusion, a medical process then very new. Reports said her condition improved after the blood infusion, but during the next day her condition deteriorated and she died that Sunday. Bill was not told of his wife’s death, but ten days later he also succumbed after having shown signs of improvement in the previous week. Violet was 29 years of age and Bill was 42. Both were buried at the New Cheltenham Cemetery after graveside services conducted by the Rev A White of St Matthew’s Church of England, Cheltenham. The funerals saddened the local community members who joined with many well-known people from racing, hunt club and other equestrian circles in mourning the unfortunate couple.

Not long after this a committee, which included Garryowen’s former owner, William Jones, put a proposal to the Royal Agricultural Society of Victoria that an annual trophy should be awarded in memory of Violet and Garryowen. A small, bronze statuette of Garryowen was created by Reinhold Kubart, a German-born sculptor. On its base an inscription read:

The Garryowen trophy for the best equestrienne at the Melbourne Show was first awarded in September, 1934, and since then it has been awarded annually.

In March 1935, on the first anniversary of the tragic fire, the Purple Cross Society donated a horse trough, suitably inscribed, in honour of those who lost their lives. In those days there were still many horses in work pulling carts, drays and other vehicles, so a drinking trough was a practical structure. It was located in Balcombe Road not far from the railway station on a site near the current car park. Violet’s niece led a pony called Brandy to have the first sip from the new trough. Brandy had been another of Violet’s ‘pets’. Members of the Farmer and Murrell families were among a large group in attendance and Violet’s mother, Ethel, cut the ceremonial ribbon.

When the road was widened in the 1960s the trough was removed and taken to the Showgrounds in Ascot Vale. After a campaign led by Laura Ferguson and others in the Mordialloc and District Historical Society, the trough was relinquished by the Agricultural Society and erected in the Mentone Station Gardens in March 1994, sixty years after the fateful fire. 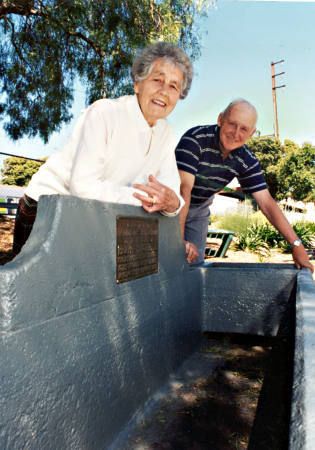 Violet Murrell during her short life did not succeed in her campaign for women to be accepted as jockeys in city race meetings. It was not until the late 1970s that females were officially accepted as riders in all classes of horse racing. Some have done very well, notably Bev Buckingham, claimed to be the first woman to ride over 100 winners; this preceding her tragic injury in a fall. Women now ride in the Melbourne Cup, and the 2008 Victoria Derby winner had a female jockey on board. How Violet Murrell would have loved to be part of today’s arrangements in the ‘sport of kings’!