A Place to Play: Mordialloc’s Rotunda

There were several keen musicians living in and around Mordialloc in the 1920s who believed it was time for Mordialloc to once again work towards having its own brass band. Earlier efforts had not brought lasting success. The goal of having a local brass band was finally achieved in February, 1923 under the auspices of the progress association. It was soon realised that while Mordialloc now had its own brass band it needed a place to play and entertain the public. Here was the beginning of Mordialloc’s rotunda.

The Mordialloc Progress Association accepted the suggestion of Bandmaster Edward Brine, that a suitable bandstand was needed and called a meeting of association members and members of the Band’s committee. The meeting took place at Mordialloc on 9 October 1923. The notion of a bandstand was readily accepted by the meeting with discussion focussing on how the money could be obtained to pay for such a facility. Finally, it was resolved to run a carnival and aquatic sports to raise the necessary funds. [1]

A committee was formed with strong representation from Mordialloc traders, the Thistle Society and the life savers. The committee decided to conduct the carnival on Creek Reserve (now named the Hazel Pierce Reserve). The Mordialloc Life Saving Club agreed to organise the aquatic sports while the traders’ association took responsibility for the ground sports. Open-air jazz dancing was scheduled for both day and night and the Thistle Club volunteered to conduct a highland dancing competition at night. The Mordialloc Band decided to render musical selections on the pier throughout the day and evening. Other amusements arranged included toboggan slides, box ball, mock police court, decorated boats and merry-go-round. [2]

The carnival took place on A.N.A. Day, January 26, 1924. [3] The weather was not kind to the organizers, keeping many people indoors. Nevertheless the planned fancy dress procession took place with the Mordialloc Brass Band leading the way. Those who paraded included Egyptian ladies, swagmen, rajahs, members of the Klu Klux Klan and fairytale characters. The mock court under the sign ‘Muddy Allock Court of Injustice’ was a feature for many people. Other signs advised offenders that ‘All Guilty Here’ and ‘Pay up and Save Time’. Other amusements were a great success with the children as well as to many adults. The aquatic sports were cancelled due to the coldness of the day. Over all the carnival was judged a great success making a profit of £125/14/8. Following this achievement a decision was made by the organising committee to repeat the event the following year. On the second occasion there was a net profit of over £1000. This money together with a contribution from the Mordialloc Council went towards the building of the band rotunda and beautifying the foreshore.

By September 1925 an area of land on the foreshore had been levelled and planted with grass in preparation for the building of the rotunda. [4] On a beautiful sunny day two months later the rotunda was officially opened by the Mayor of Mordialloc, Cr Blanche. He said the rotunda was the result of the work of ‘a body of self sacrificing and unselfish men, many of them business men, who neglected their businesses and all of whom gave up their holidays, that their district might prosper and progress.’ He went on to wish the band every success in their new home and felt that the people of Mordialloc would spend many pleasurable and enjoyable afternoons and evenings around the rotunda. [5] 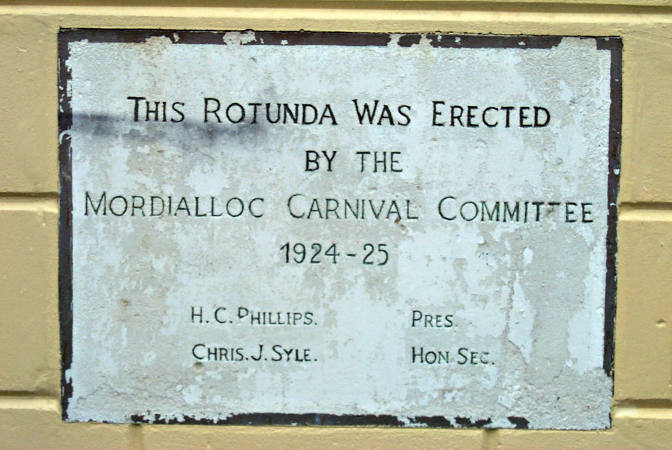 The rotunda, a handsome octagon shaped concrete structure, supported by eight massive pillars and capped by a tile roof, cost the carnival committee about £900. It was from this structure that the thousand or so people present for the official opening heard the Mordialloc Band give a sparkly performance. The band members, themselves showed unconcealed delight with their new home. [6]

A few years later some tensions arose about the use of the rotunda. There were occasions on Sundays when no band was present and this, the management committee thought, was unfortunate. The solution they saw was to invite another band to make use of the facility. The Mordialloc band believed this was an intrusion into their domain. Chris Syles, the secretary of the rotunda’s management committee, explained in a letter to the local newspaper that the committee’s policy was to give preference to the local band. Where the local band could not provide recitals each Sunday another band would be asked to assist. Syles said the Mordialloc Band recognizing the issue agreed to work with the Newport Workshops Band on alternate Sundays thus ensuring the presence of a band at the rotunda each Sunday. [7]

A month later, Edward Brine, the band’s conductor, was critical of decisions made by the rotunda’s management committee and suggested that a member of the band should be added to its composition. With such representation the band would be fully informed and consulted on all arrangements made by the committee. Without such representation he said the band would not use the rotunda, a facility that was originally built for its use. He pointed out that although the band had splendid assets in terms of musical instruments and uniforms, it was in a bad financial state. Shortly after Brine’s statements the band gained representation on the Management Committee. The band continued to use the rotunda in following years although in the winter months it adjourned to local halls where heating was more readily available.

By the 1990s the rotunda was showing its age. It was in need of refurbishment after suffering from the onshore winds and deterioration resulting from salt spray. Under the direction of the Mordialloc Mentone Lions Club the structure was painted and revived to be officially declared open by the president of the club, Bill Rothel, and the Mayor of Mordialloc, Hazel Pierce on 20 December 1992.

Today the rotunda remains an icon of Mordialloc foreshore, although it is now rarely used as a band venue. However, it is the site of wedding celebrations and birthdays. There is hardly a week that goes by in summer, spring and autumn when the rotunda is not used. This is one indication of the wisdom of a group of Mordialloc residents in making a decision eighty-five years to create it. 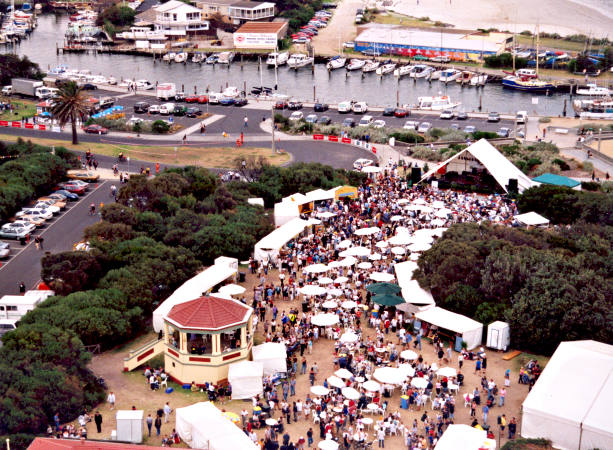 Aerial view of rotunda during a festival 2002. Courtesy Kingston Collection.