Mannix at Mentone: A Fierce Row Over Religion

Deep suspicions and outright bigotry over religion affected people’s lives at the time of the Great War. Of course religious differences had caused conflict for centuries but in Australia, despite lingering problems, there were signs that these issues were being treated more sensibly in the Edwardian era, that tranquil period before Armageddon. People of different denominations sometimes even attended each other’s functions, showing some softening in the hard line divisions. Then came the First World War.

Australia’s official support for Britain in August 1914 was immediate, complete and palpably enthusiastic. However, within the Australian community, at a local level, there were differences over this. Australia at that time had a large group of residents who were British-born, overwhelmingly Anglican, or Protestant religions, and this group naturally supported the war wholeheartedly. Native-born Australians of non-Catholic faiths generally favoured the official attitude to the war as well. Many Catholics also endorsed our military involvement, but a group of Catholics with Irish ancestry did not show the same enthusiasm for Britain’s war and this attitude hardened after the Irish rebellion in 1916 that bolstered the anti-English feeling.

The wild enthusiasm to fight ‘The Hun’ was tempered when the realities of modern warfare began to reach the minds of Australians, half a globe away. Huge losses of life at Gallipoli in 1915 were followed by worse horrors as thousands of Australians died the next year in Flanders, the Somme and other Western Front ‘hell-holes’. The Great War eventually cost 60,000 Australian lives and at least that many came back wounded and scarred in other ways. In Australia there was anger, sadness, hatred for the enemy, and a range of other attitudes to the continuing bloodshed in Europe.

Severely depleted during 1916, yet fighting with great courage, the AIF called for more recruits to tackle the foe. But recruiting meetings failed to produce enough replacements and eligible men were called ‘shirkers’ or sent white feathers in the mail, anonymous condemnations for cowardice. There was bitterness and division in the community. This grew worse as Billy Hughes, Australia’s PM, introduced military Conscription into the debate and held a referendum late in 1916 to make it possible constitutionally. It was defeated and so was another such poll in 1917.

The referendums on Conscription for compulsory military service deepened the divisions in Australia over the war and how it should be managed. In Victoria, particularly in Melbourne, Archbishop Daniel Mannix, the leading Catholic spokesman, inflamed the already tense debate over Conscription. Mannix, an Irish prelate who had arrived here in 1913, called the conflict in Europe a ‘trade war’ between Britain and its enemies, arguing by implication that Australia was not directly a part of this. Therefore to force men into such a war was unfair and wasteful of lives. Of course the supporters of Australia’s role as an integral part of the British Empire were disgusted with Mannix and implied he was a traitor. Their antipathy grew in 1917 when the second Conscription referendum was narrowly defeated in Victoria and Mannix was blamed for the overall failure of the campaign for a ‘Yes’ vote. Mannix was very loyal to Ireland and the recent violent events there added to his anti-English stance. The Irish rebellion played a part in the emotional disagreements over Conscription and the war generally. It was natural for a large group of Anglican and other Protestant people to have negative feelings about Mannix and his Catholic supporters as the Great War ground to an end. Many Catholics, on the other hand, supported Mannix’s views and disliked the zealots who pushed so hard for more Australians to risk their lives in France. Attitudes for or against Conscription did not divide completely on religious lines but there was enough of a religious element in it to foster suspicion between Catholics and the whole group of non-Catholic church adherents.

These profound disagreements did not disappear when war ended in 1918. In August of that year Mr Mudge, a preacher at the Cheltenham Church of Christ, had condemned Mannix outright during a service, letting his congregation know that the Catholic prelate was a traitor to the country in which he lived when he opposed Conscription and also criticised the war involvement. This sermon was reported in the Moorabbin News, causing local dissension. For six weeks letters to the Moorabbin News put opposing viewpoints, some calling Mudge a bigot and others supporting his claim that Mannix was disloyal to Britain and Australia. One writer challenged Mudge to prove that the Catholic Church was disloyal and give evidence of the ‘abuses’ he claimed existed in that church. A Cheltenham Protestant said that Mannix had done them a favour because Protestants would now be more watchful in defending their faith. At the time there was a revival of intense religious bigotry and intolerance. When the war ended in November 1918 there was an immediate rejoicing at the local level and, shortly after the armistice, a huge thanksgiving service was held at the Mentone Skating Rink attended by well over a thousand people. It was an inter-faith service, mainly celebrated by Anglican and Presbyterian ministers; noticeably there was no mention of Catholic participation. 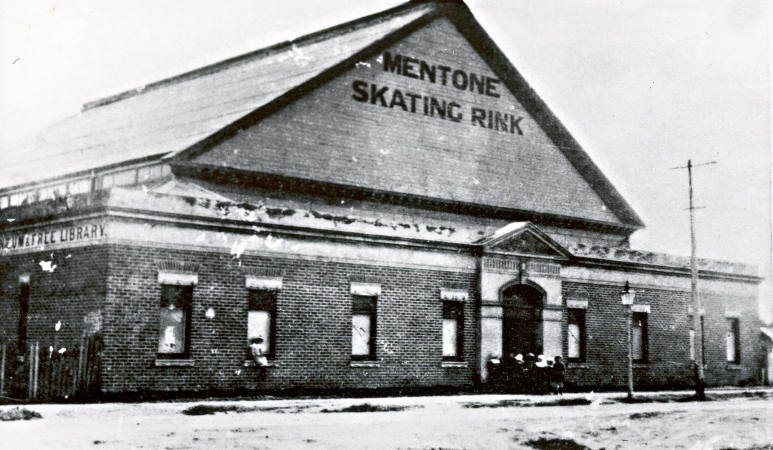 Mentone Skating Rink, Brindisi Street. Served as a venue for many social functions from late 1880s until the mid 1920s. Courtesy Ron Lister.

In August 1919 the evidence of local religious bitterness became prominent again, once more involving Daniel Mannix. The Mentone Catholics, now led by Father Tim O’Sullivan, invited the Archbishop to a concert where he would open their building fund for the eventual erection of the two-storey ‘church-school’ building in Childers Street. Another huge gathering of about one thousand people, mainly Catholics, attended the concert in the Skating Rink that was a backdrop to the main item on the program, a challenging and downright provocative speech by Archbishop Mannix. There is little doubt that Mannix knew all about the local controversy involving Mudge and the disloyalty issue of the previous year. He made a veiled reference to somebody not far away who desired him to go away…but, no, he was staying on. During the speech he defended himself against charges of disloyalty using whimsical verbal tricks as well as clear provocation aimed at his strongest opponents, the Freemasons.

On the charge of disloyalty to the British Empire he said, I have no design against the Empire… in fact I think little about it, but a great deal more about parts of it, particularly Australia and Ireland. Again, he said, I am an Irishman but I put Australia first; England Scotland and Ireland would follow. This clever ploy of appealing to Australian national pride and putting Ireland last in his loyalties was met with great applause. Mannix knew his audience and worked them to defuse any potential criticism. He also defended his support for the workers in a recent seamen’s strike, adding that he had not engineered the stoppage as some had said. All he was advocating was a fair distribution of income. If the division were fair then there would be no strikes, he said. Then came a bombshell. He referred to Freemasonry: Some people had the audacity to think they only had to press a Freemason button to make others do as they liked. It was regretted that political parties were honeycombed with Freemasonry… If the Labor Party wanted to make headway, it must get rid of Freemasons. Australia would be a much better country if Orangemen and Freemasons were dumped outside the Heads. There was loud applause mixed with laughter after these strong words. On Conscription he stated that the men who supported it were now glad, within themselves, that conscription, which would have swamped Australian finance, was voted out, and in the end they probably would be pleased to erect a statue to him, Dr Mannix. Much laughter was reported after this remark.

Mannix’s visit caused consternation in local Protestant circles. Prominent Mordialloc identity, Dave White (a later mayor), was elected as State president of the Protestant Federation with calls going out for church members to support this body in view of the Mannix attack. Mr Snowball, MLA for this area, and president of The Loyal Orange Association of Victoria, was outraged and willingly lent his support to the founders of the Mentone Grammar School, JJ Rogers, The Rev Hennell and others. These people had noticed that Tom McCristal had seconded the toast to Mannix at the function in August. McCristal had been accepted as a fine schoolmaster who ran Mentone College up till then with support of parents from many religious denominations. McCristal closed his college the next year as the new grammar school opened. Religious bitterness may have had some role in the school changes, as Tom McCristal was a devout Catholic and a Mannix supporter. Those who promoted the new Mentone Grammar School certainly would have abhorred the policies Mannix had espoused over the few years prior to 1920 when their school opened. Anti-Catholic feeling among some groups was intensified by the Catholic Church’s insistence on separate schools and strong disapproval of Catholics marrying ‘outside the Church’.

As time went on the local intolerance became less noticeable. Tim O’Sullivan, the parish priest of St Patrick’s Mentone, certainly helped to ameliorate the divisive situation that had arisen. He mixed freely with all locals. O’Sullivan played bowls at Mentone and was elected to a position on the committee of Mentone Football Club. Here he was respected as a fine contributor to the local community. By the time he left in 1928 he had built a great friendship with locals of all religious persuasions. Mannix came back in 1928 to open the new Childers Street ‘church-school’. There was not the same bitter atmosphere despite the prelate testily calling for fair treatment of Catholic schools in government funding. Mannix even praised Dave White, the Mordialloc Mayor, in his own way, saying that he admired him as a person who had such fine qualities he would make a good Catholic. This was greeted with much laughter, but no comment from White. Slowly the bitter barriers created by bigotry were being removed. 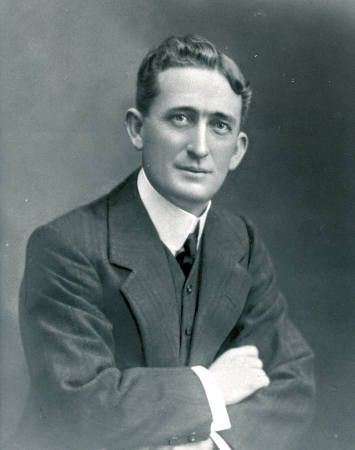 During the 1930s the parish priest of St Patrick’s, Father Martin, and The Rev Cloyd of the Davies Memorial Presbyterian Church held amicable discussions over practical issues, and on one occasion the Presbyterians sent a load of trestles and tables to be used in a Catholic fund-raiser where extras were needed.

Daniel Mannix continued to dominate Catholic life in Melbourne until the 1960s. He attended dozens of Confirmations, opening ceremonies and other events where he spoke strongly in favour of government funding to Catholic schools which were under-resourced and overcrowded. In the 1940s and 1950s he tacitly supported a political group led by B A Santamaria that pushed the Mannix line but ended up splitting the ALP over communism in the trade unions. Mannix lived until he was 99; his death in 1963 was just prior to the first government funding to private schools, most of which were Catholic. His death also coincided with the first effects of Vatican 2, a council called by Pope John 23 that broadened Catholic attitudes and promoted closer relationships with other faiths. Soon after this, inter-denominational services were held as ‘ecumenism’ was promoted. 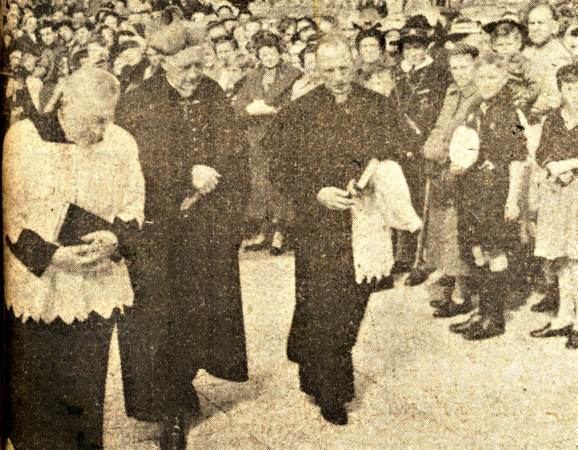 The bigotry was dying. A new generation has grown up since those days and most of them have no knowledge of the suspicions and distrust that people of different denominations once felt for each other.