Mr J Grut, the town clerk and treasurer of the City of Mordialloc, was suspended from both positions in May 1962 by the council on a vote of five votes to four. He appealed, as was his right under the Local Government Act, and an inquiry was established. Mr T W Hammond, a former Stipendiary Magistrate, was appointed by the Minister of Local Government to conduct the inquiry and report his conclusions and his recommendations after hearing witnesses both supporting and opposing the council’s actions. The venue for the inquiry was the council chamber at Mentone. The legal team for Mr Grut was led by Mr K H Gifford while the opponents were led by Mr Oliver Gillard QC. The date of the inquiry was delayed to allow Mr Grut’s team of lawyers time to assemble their defence. With both sides looking towards achieving an affirmative outcome for their case the inquiry commenced in August 1962.. 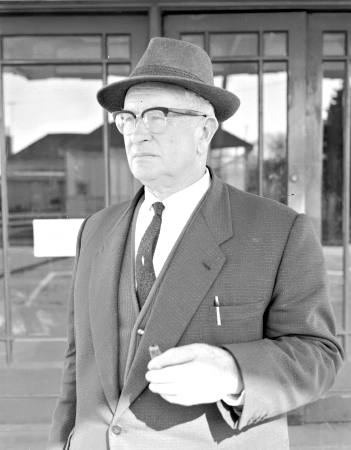 Shortly after the commencement of the inquiry there was an attempt by four councillors to halt the proceedings. A special meeting was called by Crs Sambell, Denyer, McLean and A Burke in an effort to save the colossal legal expenses that would be incurred by the council. Moreover, they were concerned that matters being brought before the inquiry in the name of the council had not been discussed or authorised. The mayor, Cr Shirley Burke, warned her colleagues that these matters should not be discussed as legal advice suggested such action might constitute contempt of court. The move to abort the inquiry was defeated.

The claims of Mr Grut’s administrative inefficiencies raised at the earlier council meetings were once again raised at the inquiry but on this occasion there were legal representatives who could challenge, ask probing questions and force individuals to justify their stance with evidence. [2] Those who supported Mr Grut’s case were similarly challenged. Councillors were called as witnesses as were the former city engineer, Walter Galt, Mr F Lonie, a solicitor who undertook work for the council, and Miss Macclesfield a council accounting machinist.

At a council meeting on 25 September 1962, before a packed gallery of two hundred people, an official from the Local Government Department of government read the judgement of Mr T W Hammond S.M. exonerating and clearing Mr Grut of all the charges laid against him. Mr Grut was called to the front of the council chamber and reinstated in his roles as town clerk and treasurer to the applause of the gallery. Mr Hammond said that Mr Grut had conducted himself with great credit during the course of the inquiry and showed remarkable knowledge of municipal affairs. He believed Grut was an intelligent and industrious officer but thought the office of town clerk was considerably understaffed. “The burden he carries was far in excess of that which any person should be asked to bear in view of the great increase in the volume of the work in the past few years,” Hammond said.. [3] The Spooner Report in which the town clerk’s administrative performance was investigated and analysed with the conclusions forming the basis of Mr Grut’s suspension was unfavourably commented on by Hammond. [4] He believed Cr Spooner erred in not first approaching Mr Grut to seek his advice and assistance in surveying the total situation, invalidating the whole exercise.

The response from councillors to the Hammond recommendations, as might have been expected, varied. Cr Arthur Burke a strong supporter of the town clerk welcomed the report exonerating Mr Grut and commented, ‘I feel that if any councillor can’t work with Mr Grut they should resign and make way for someone who will.’ Cr Mal Buxton, a newly elected councillor in 1962, said the report rejected one trivial charge after another and that if councillors had taken the trouble to properly investigate the matters themselves in the first place they would never have seen the light of day. [5] Crs Beesley, Shaw, and Ward stated that their personal position had not changed but they were prepared to adopt an attitude of acceptance. [6] Cr Shirley Burke was strong in her conviction that the decision to suspend Mr Grut ‘was properly made.’ She retired from council in 1964 with failing health, and no doubt disappointment about events. Other changes occurred with Arthur Burke, Jack Spooner , T V Shaw and John Beesley also leaving the council after several years of service making the council with which Grut had to deal with after the inquiry quite different..

Bill Nixon, a long time Parkdale resident and a Mordialloc councillor from the eighties, commented that Jack Grut was neither a thief nor a crook but he was unwilling to appoint new staff. He believed he could do things himself with the small staff that loyally supported him. Basically he was opposed to change and this included a conservative approach to the place of women in local government. While the inquiry caused tension and ill feeling amongst some councillors Nixon believed it was ultimately good for the council as it set about adopting more appropriate business and administrative practices to tackle the issues of the 70s and 80s. [7]

Jack Grut was reinstated as town clerk in September 1962, awarded £4530 costs against the council and paid his full salary for the period of his suspension. He continued to serve the City of Mordialloc community until 3 March 1972 when he retired after 47 years service, twenty four years of which he was town clerk. Asked to comment about his time at Mordialloc he said he had no hard feelings about leaving. He had never courted popularity during his term. ‘A town clerk is never popular, but that never worried me,’ he said. [8]