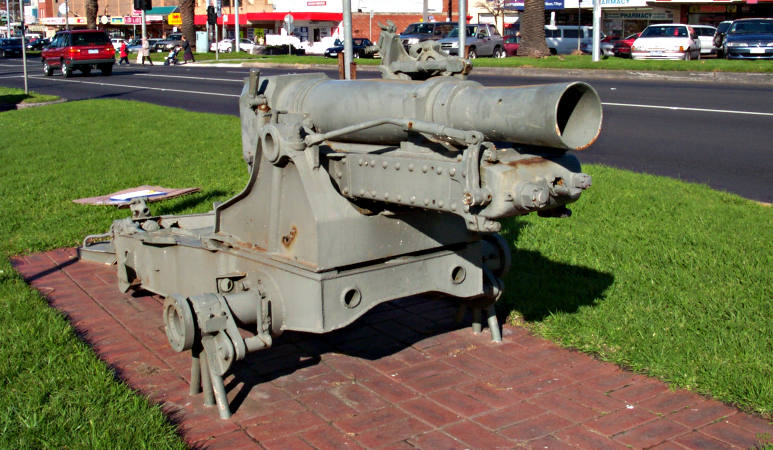 After the First World War the Mordialloc community financially supported the creation of two memorials to remind residents that young men from their district served and died in the bitter fighting of Gallipoli and the Western Front in France and Belgium. One, on the main street of Mordialloc, was a flagstaff mounted on a bluestone pedestal on which the names of nineteen men who sacrificed their lives were listed. After the Second World War, through the initiative of members of the Mordialloc RSL, two 25 Pounder Short Guns were placed to the north and south of this cenotaph as sentinels. These guns serve as a reminder to thinking residents and visitors that local men and women served in the conflict of the Second World War. 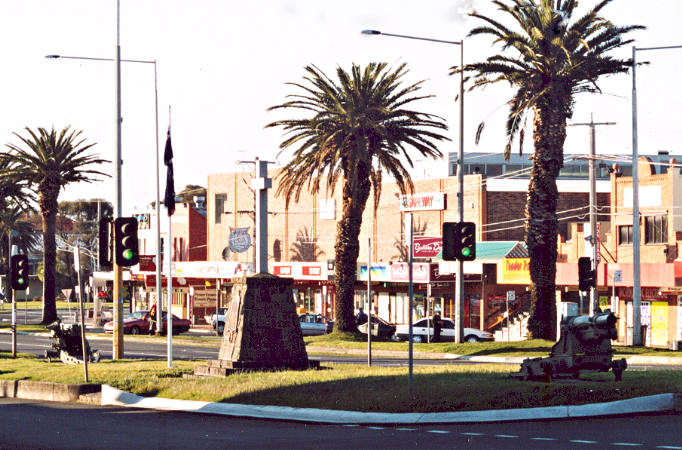 The British 25 Pounder first built in 1935 was used successfully by Australian troops in the hot dry desert campaign in North Africa. However, later when the Australian forces faced the advancing Japanese army in Papua New Guinea conditions were radically different. Soldiers experienced hot, steamy, humid and corroding conditions in the jungle, coupled with some of the most difficult terrain in the world. To cope with such conditions the design of the British 25 Pounder had to be re-thought. The outcome was the 25 Pounder Short Gun.

The basic differences between the two weapons were weight, and the ability of the 25 Pounder Short to be disassembled into fourteen manageable packages most, weighing less than 300 pounds. This facilitated transportation. Savings in weight were achieved by shortening the barrel length to 1.26 m from 2.47m and creating a light weight box section gun carriage. The total weight of the 25 Pounder Short was 6471 kg compared to the weight of the standard gun of 8898kg.

The redesigned gun was manufactured at Charles Ruwolt (later Vickers-Ruwolt) in Richmond with the prototype being test fired on 5 December 1942 and introduced into service in August 1943 as an adjunct to the standard gun, rather than as a replacement. It remained in service until the end of the war. Michael Cecil writes that a total of 212 Short guns were built. He noted that the gun was not popular with its crews. He wrote, ‘The absence of the shield combined with the severe back blast from the shortened barrel firing ammunition designed for the standard gun, adversely affect the crew. It was not unusual for the crew to end a lengthy fire task suffering mild concussion, even nose bleeds, as a result of the back blast.’ In addition Cecil said crews had little confidence in their accuracy as, on firing, the weapon bounced violently forcing the crew to stand clear or risk injury.

After the conclusion of the Second World War the Mordialloc RSL approached the military authorities for weapons from the war to add to the Mordialloc cenotaph. Two 25 Short Pounder Version 1 guns were provided. Both were built by Ruwolt in 1943, registration numbers A 87 and A 94. Both were placed at the cenotaph minus wheels and tyres, sighting instruments and miscellaneous ‘loose’ fittings, and strangely, at least by the late 1990s, painted battleship grey. The individual history of the guns is not known as the particular weapons could not be matched to existing military documents. One military historian believed the guns could have been used on the Kokoda Trail but this view was dismissed by Alex McPherson as being unlikely. He suggested ‘the possibility of these guns having fired any shots in anger is limited to the fact that of the total quantity manufactured, only approximately thirteen went to New Guinea and saw action.’ However, 25 Pound Short guns were used in Borneo, Weipa and Lae. It was the first gun to be dropped from an aircraft when in August 1943 two pieces were parachuted into Nadzab west of Lae to support the attack of the 503rd US Parachute Infantry Regiment. By 1946 the 25 Pounder Short was declared obsolete for military purposes.

Early in 2000 informal approaches were made to the Kingston Council by individuals offering to take responsibility for the two deteriorating guns at the Mordialloc cenotaph. One inquirer wanted to restore the guns and sell them on the booming market for military hardware in the United States of America, while the second inquirer was interested in seeing the guns restored and located at the military base at Puckapunyal, Victoria. The Mentone RSL also expressed interest in the future of the guns suggesting they be relocated to the park in the front of the RSL building in Mentone Parade where they could be restored over time as trophy pieces. None of these offers were taken up by council.

Bryce Raworth Pty Ltd who had undertaken the heritage study for the City of Kingston was commissioned by the council to report on the conditions of the guns. The report, noting extensive corrosion accelerated by the salt laden air of Mordialloc and the lack of regular maintenance over the years, suggested that the restoration would be extensive and probably best undertaken in stages. A second report was commissioned in March 2007 of material technologists, Peter Kerr and Ivar Nelsen, who were asked to provide some guidance in the management and maintenance of the Mordialloc guns. Their detailed report, amongst other things, drew attention to the need to remove all existing rust, restore missing elements like wheels and tyres, display the guns so that no metal part was touching the ground and repaint the guns in an appropriate colour. Extensive advice was also given on the cleaning process using highs temperature, high pressure water and detergents. 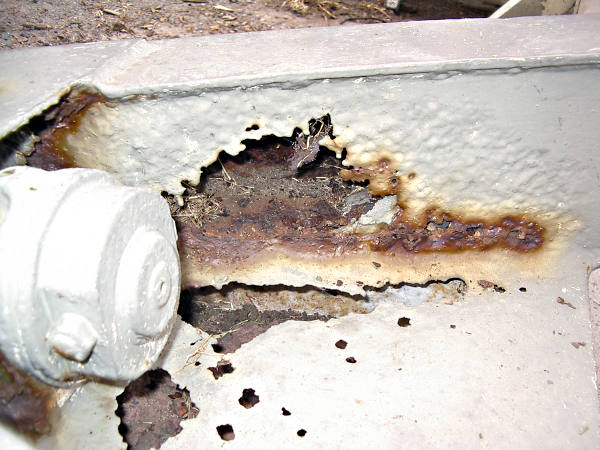 In 2006 a grant of $7000 was received from the then Department of Victorian Communities to restore the guns. The council’s commitment was an equal amount. The task of undertaking the project was given to OEM Engineering Pty Ltd of Braeside, Victoria, where the guns were dismantled, sand blasted, rust protection applied and spray painted. Replacement parts were sourced by Alex McPherson and Wes Scott. The overall cost of the project was $40,000 without including the time contributed by council officers and members of the community. The restoration work was completed in November 2008. 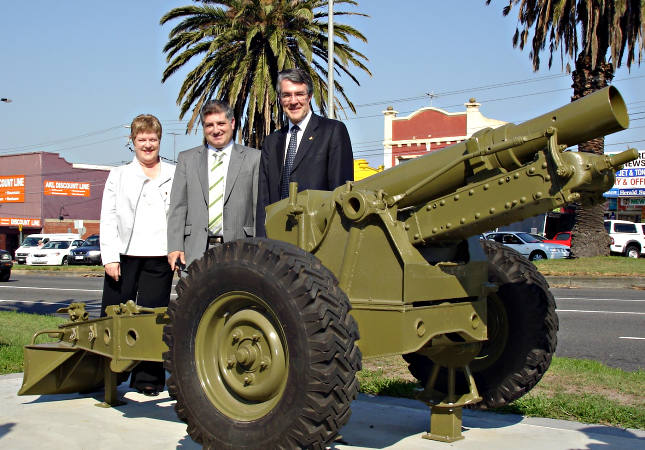 Janice Munt, MLA, Member for Mordialloc, Cr Arthur Athanasopoulos, Mayor of Kingston and Mark Dreyfus MP Member for Isaacs in the Federal Parliament with one of the restored guns, 2009. Courtesy Kingston Collection.

The guns were replaced in their original positions at the cenotaph and on 21 April 2009 a simple ceremony took place when the Mayor of Kingston , Cr Arthur Athanasopoulos, in the presence of councillors, politicians and community members, unveiled a plaque commemorating the restoration of the guns. 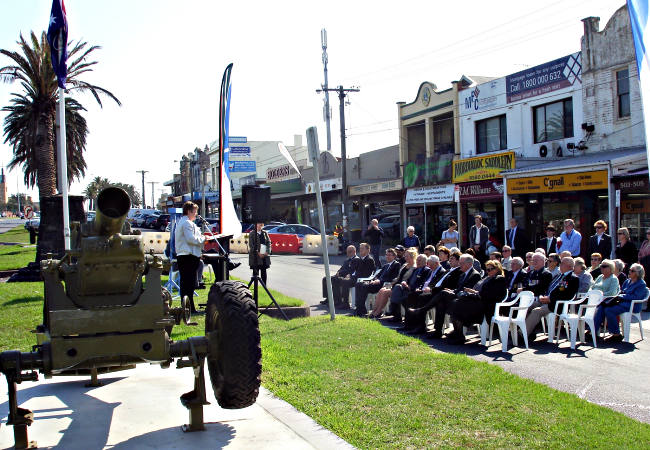 People at the Mordialloc ceremony commemorating the restoration of the guns, 2009. Courtesy Kingston Collection.