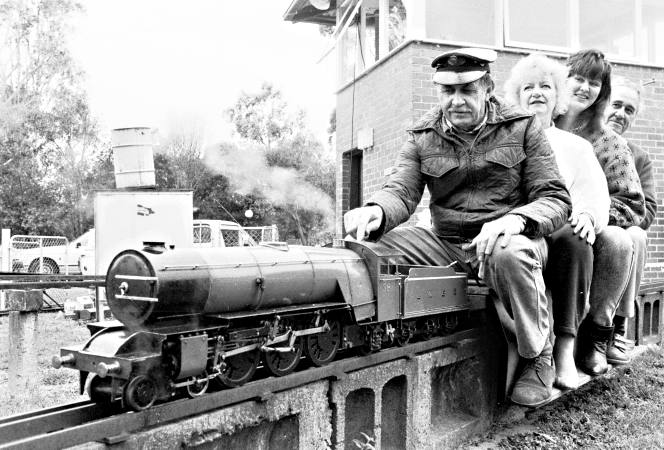 Yes, there once was a train in Charman Road. Well, it did not run down the road, but it aroused a lot of interest just the same. It certainly has a fond place in my memory.

During 1936 my father built a weatherboard house, number 28 Charman Road Mentone, about half way between Beach Road and Balcombe Road, and we moved from Oakleigh to live there early in 1937. I was a toddler then but over the next few years I enjoyed the marvellous creation of Mr Finlay who lived across the road from us, in number 29. Periodically he would run a miniature steam train and carriages around his property giving absolute joy to the locals who happened to be passing by and able to watch.

Finlay had built a small railway that ran around the perimeter of a spare block of land that he owned next to his own home. The rail track had a gauge about the width of an adult hand and it sat on timber supports that were a couple of feet (about sixty centimetres) above the ground. It must have taken the owner a long time and much painstaking labour to build this structure. At the back of Finlay’s home there was a large workshop in a shed where he worked on his railway engines and all that went with them including carriages and signals. A spur line off the main track ran into the workshop so that the trains could be driven inside after their trips around the line in the otherwise vacant paddock.

When I was about five years of age, in 1939-40, Finlay gave me and some other kids rides on the train several times. The train came out for these occasions at intervals of several weeks, from my memory of those far-off days. He would sit on a carriage behind the engine from which point he controlled the speed of the train as it went around the circuit. Behind Finlay a couple of other carriages carried the small kids who sat on specially designed rolling stock that allowed a safe ride. From my memory only one or two passengers were taken on each trip. At other times the small steam engine towed miniature carriages that looked like the ones on real trains. I can remember the delight when the coal was ignited in the engine’s tiny fire-box and the steam hissed in the authentic way that steam engines did in those days. Finlay built several steam engines back then. It was the era before diesel locomotives took over and every boy loved steam engines that roared around country railways and often took goods trains to sidings in the metropolitan area as well. A bellowing steam train brought the sailors up from Flinders Naval Depot every Friday for weekend leave and returned them on Sunday evenings. The loud roar of its whistle was well known in Mentone. It was a time when many boys wanted to be engine drivers and Finlay’s trains whetted that appetite.

On one occasion there was an accident with the train. I was waiting for my ride one day when Finlay had built up the steam and the engine was hissing away ready to take off. He must have accidentally knocked one of the controls because the model train sped forward towards a bend where it derailed and fell to the ground amid loud hissing and spilling of burning coal. No one was hurt. There was much activity as the owner put out the fire but I cannot remember how he returned the heavy engine to the track. Perhaps we were sent home as the situation would have been embarrassing for the man in charge. In 1941 we moved from Charman Road to another house near the real railway in Mentone so I lost contact with the model train and its owner.

Years later I often walked past the old site of the miniature railway and it remained there for decades, only disappearing some years after Finlay died in October, 1984. My earlier guess that he was an engineer of some type was proved wrong when Graham Whitehead, Kingston Historian, checked the Probate Index to discover that Finlay was a signwriter and created the trains as part of an elaborate hobby. His full name was Kenneth Claude Finlay and he was 81 when he died. Sands and McDougall directories record that K. Finlay occupied the property of 29 Charman Road from 1937 onwards suggesting he must have arrived there not long before we did, perhaps a year or so, allowing for the fact that Sands and Mc Dougall records took a while to catch up with new arrivals. When I was a guest on his train trips he would have been in his early thirties, a young married man. I remember there were small Finlay children and his wife threw me a birthday present from the top window of their home on the morning I turned six in 1940. The block of land that housed the railway has been built on in recent years so the track is now only a memory.

I cannot remember whether we thanked the man who gave us those train rides. I hope we did because Ken Finlay gave a lot of pleasure to local train lovers as he drove his engines around the Charman Road track seventy years ago. 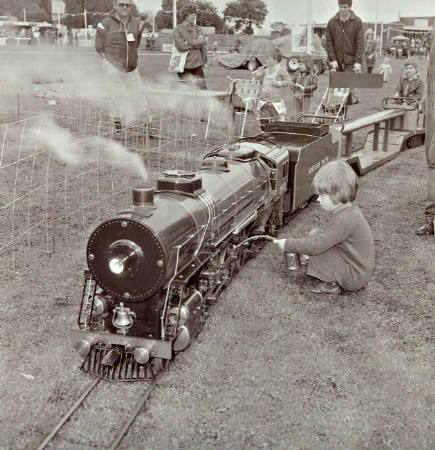 Author:
Leo Gamble
Published:
8 August 2009
References:
The article is based on my memories of that time and discussions with other locals who remember the trains.
Article reference:
465