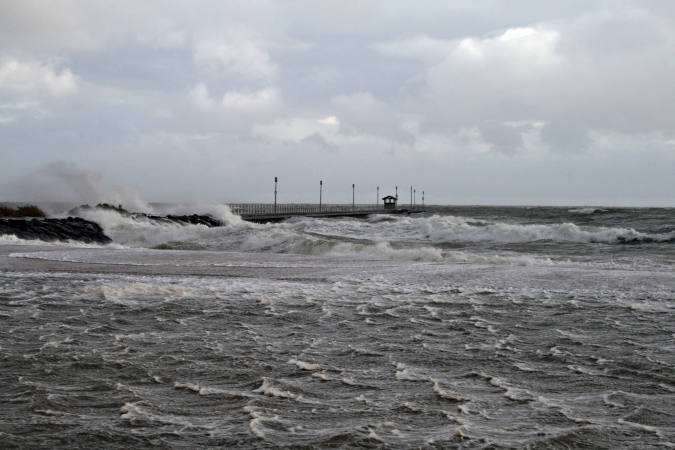 The origin of the Mordialloc Pier is not clear but it is believed the pier began as a small jetty in the 1850s. [1] A government tender for a more substantial construction was issued in 1869 and it was still being constructed in 1870. [2] The early settlers of Mordialloc probably depended upon supplies being brought to them by ship, necessitating the provision of a jetty at the mouth of the Mordialloc Creek to facilitate unloading. Roads in the district at that time were little more than sand tracks making transfer of people and materials difficult. By 1875 there was an active campaign from local residents to lengthen the existing jetty. [3]

In January 1875 residents asked the Shire of Moorabbin council to approach the government for money to extend the pier by three hundred feet. Cr Etheridge suggested steps should be taken to obtain a grant for public works for this purpose. His colleagues agreed. He pointed out that at other watering places government money had been spent in an effort to attract visitors. At Sorrento, ‘a place that had been uninviting,’ the government spent £6000 on their jetty. [4] Ten years later, in 1885, a petition to the Minister of Customs, signed by many local people, asked that improvements be made to their jetty to enable small steamers and yachts to visit but had received the reply of the usual evasive and stereotyped character suggesting ‘if the inhabitants did not pester the august political head of the Customs their prayer would be answered some time in the distant future.’ [5]

Local people hoped the existence of an extended pier would encourage the bay steamers to call with their cargo of day trippers seeking a pleasant afternoon on an excellent beach. The Victorian Municipal Directory notes that the steamers Williams and Queenscliff were running from the wharf during the summer season in 1880. At the turn of the century SS Hygeia, commissioned in 1890 and the SS Weeroona in 1910 dominated the bay trade regularly transporting day people to Mornington, Sorrento and Queenscliff. It was in 1910, that George Nipper representing a Sydney syndicate proposed establishing a pleasure steamer service between the city and Mordialloc. Shares had been issued and the Sydney steamer, ‘Victoria’ purchased to provide the transport. The plan was for the well-equipped vessel to call into Williamstown after leaving the city and proceed to Port Melbourne, Albert Park, St Kilda, Brighton, Sandringham, Black Rock, Mentone and Mordialloc piers. The same calls would be made on the return journey. [6]

In addition to the thousand visitors it was also local residents who were attracted to the pier. It was a favourite place to promenade during good weather and it was there that the Moorabbin Shire Band often entertained audiences with their repertoire of popular tunes. [7] For several years in the 1920s open air church services, organized by a local committee and advertised in the local press, were conducted on the pier on summer Sunday afternoons. [8]

The local newspaper promoted the pier for those ‘fond of the rod and line’ [9] reporting good catches of schnapper from one to two pounds in weight. A two and one half pound flathead was landed in 1904, a catch seen as a rarity. A few years later a ten foot shark was hooked. It had been seen in the area for several days but eventually swallowed the bait used to lure it to its death. The fishermen trying to land the catch thrust a life-saving hook into its side. Infuriated, with blood oozing from its side, the shark plunged and twisted to such an extent that the men had to relinquish their hold to save themselves from being pulled into the water. The shark escaped. However, it was believed that it would not have survived because of the injuries it had sustained.

An ongoing problem was damage to the pier caused by pounding waves washing some of the structure away. Damage, for example was reported in 1901, 1903, 1910, 1922, 1924 and 1934. Some of the repair work required on these occasions was described as substantial, demanding not inconsequential sums of money. Availability of money also became an issue in 1983 when the Ports and Harbours were in discussion with the Mordialloc City Council about repairs to a damaged pier. A survey of the pier revealed piles supporting the pier riddled with worms and greatly reduced in circumference due to natural erosion and corrosion. The Ports and Harbour Division of the Transport Department proposed to rebuild the pier using a timber superstructure of cross heads, beams, deck and handrails supporting the over-water structure on concrete piles. A significant feature of the plan was a shortening of the 317 metre pier by 60 metres. This proposal the council accepted believing something was better than nothing. The Mayor, Cr Atkinson, said the council had little time to consider the plans and felt if they hadn’t approved them they would miss out altogether in funding for the necessary refurbishment. [10] 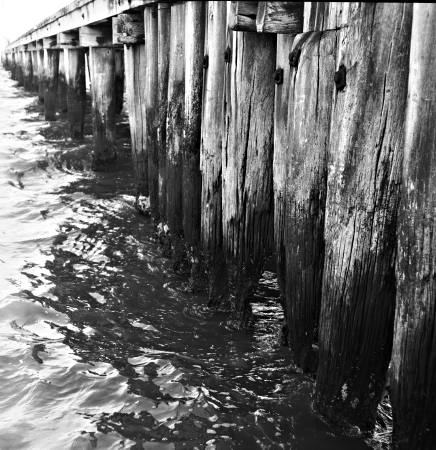 There was a sharp reaction to the proposal in the community. Jack Pompei, a local boat builder and advocate for the Mordialloc Creek, launched a petition to keep the pier’s existing length. He argued that if the pier was shortened it would make the entrance to the Mordialloc Creek a death trap. He pointed to the reefs on either side of the pier which would be exposed, creating a dangerous situation for boats using the creek. Frank McGuire, a local historian, stressed the historical significance of the pier, a feature that had been part of Mordialloc for over a century attracting thousands of visitors in the summer months. The baths had been washed away in the 1934 storm and not replaced leaving the pier as the sole remaining Mordialloc historical landmark. Peter Spyker, politician representing the Mentone district, lobbied the Minister for Transport and called upon the Council to reconsider its decision. [11] By August 1985 Pompei reported 2000 individuals had signed the petition but he expected the number to increase substantially His intention was to present the petition to the Minister of Planning and Environment, Evan Walker, and the Minister of Transport, Tom Roper whose portfolio took in Ports and Harbours. 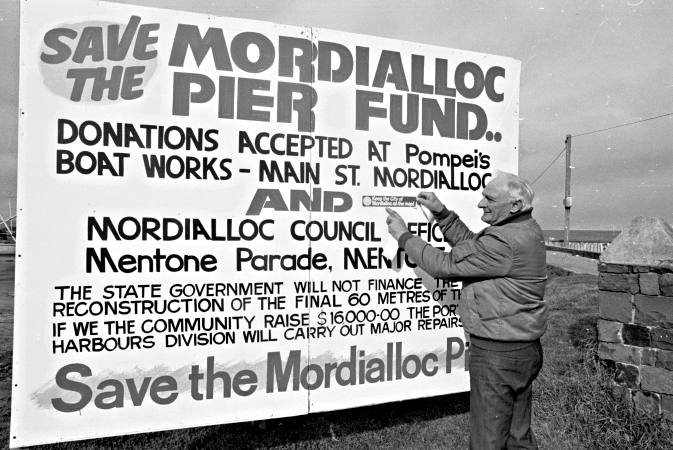 Jack Pompei stands beside a bill-board calling for donations to save the Mordialloc pier, 1986. Courtesy Leader Collection.

The news in 1986 that the government and council had finally agreed that the original length of the pier should be maintained was welcomed by the community. However the question of who was to pay was not resolved. Minister Roper’s stance was that the council should pay. He said as the councillors initially agreed to the plans to shorten the pier but changed their minds so they should bear the cost. Mr Spyker thought an approach should be made to the Australian Bicentennial Authority for a grant but the local Bicentenary Committee was not convinced. The Council was opposed to any money from the Bicentennial Authority being used to restore the pier. For them money from that authority should be spent on projects within the municipality and as the municipality’s boundary extended only to the foreshore the pier was ruled out. [12]

The final resolution was that the last 60 metres would be repaired for $22,000. Money was raised through donations collected by the Save the Pier Committee and from contributions from several other organizations. The Mordialloc Council contributed $5000, the Chelsea Council $2000 and the State Tourism Commission provided $7000. Jack Pompei said ‘It proves what I said all along – the pier belongs to the taxpayers of Victoria, not just the ratepayers of Mordialloc.’ [13]

Twenty three years later the pier was showing its age. In February 2009 the local member of parliament, Janice Munt, announced a government grant of $500,000 to give the pier a facelift. The revamp included “new top deck, repairs to capping on the sides and replacing the lower side platform decks with steel mesh to allow for waves and tidal changes.” [14] There was no suggestion that the pier should be shortened nor was there any argument as to who should pay. 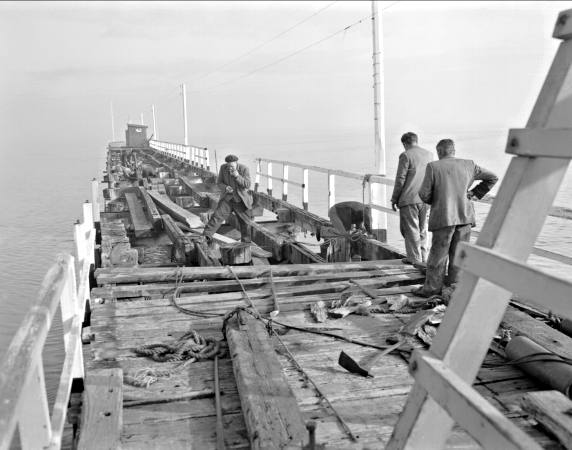 Reconstruction of pier after a storm, 1963. Courtesy Leader Collection.