Colonus No 19 leading the 1942 Melbourne Cup Field as it passes the stand for the first time.

Saturday. All morning rain tumbled down from dark grey skies that produced a dull atmosphere resembling dusk. The air raid shelter my father had dug in our backyard was filling up like a small dam and the trenches in Mentone State School playground near our place contained half a metre of yellowy, muddy water. It was Melbourne Cup day, 21st November 1942. Cup day had been transferred to a Saturday by government regulations that banned mid-week racing as a distraction from the war effort. John Curtin was Prime Minister and his government had put in place an austerity campaign that conserved as many resources as possible for war purposes. Rationing of many consumer goods had begun and Australians in their thousands were in the services here and overseas. The nation had been threatened from the north by Japanese forces who had been stopped at Kokoda but who continued to wage war through New Guinea and many Pacific islands, having occupied much of South East Asia. Australian citizens were expected to deny themselves unnecessary luxuries so our fighting forces could be given the maximum support in fighting the foe. Some people wanted organised sport to be banned, but the government argued that some sporting entertainment should go ahead as a contribution to the morale of civilians and service personnel alike.

So the Austerity Melbourne Cup, as it came to be called, took place that Saturday with the usual public interest in the event. My father took an interest in racing at that time. He and his brother used to run a ‘four-placed-horses-card’ scheme among the building workers and others who called at the construction sites where they worked as carpenters. He also made Saturday visits to the barber in Mentone Parade, opposite the triangle real estate offices. Inside the shop with its three chairs for haircutting a staircase led to a mystery room upstairs where, rumour had it, a bookie was set up. In a similar way to John Wren’s Collingwood tea shop, the barber seemed to have a huge clientele on certain days but with little evidence of any increase in hair being shorn. At that time off-course betting was illegal. There was no TAB then and only those who attended Flemington could legitimately back a horse in the Cup. That meant that only 40,000 people, the Cup crowd, could bet on the 1942 race legally. This was half the attendance of the year before, the numbers reduced because of the weather and probably also because of many people being in the armed services.

The illegality of off course betting was widely ignored and when the baker called at our house on that rainy Saturday morning my father was very interested in what the man had to say. Bread was delivered in those days. There were no supermarkets and the bread stayed fresh for only a day, so you either went to the baker shop or, as most people did, bought the bread from the baker’s cart driver who called daily in his horse-drawn vehicle. That Saturday, as Mum chose a loaf from the bread-basket, the baker said words like this.

‘Just been at Manning’s stables and they say they have a mudlark in the Cup. They reckon he’ll win.’

Frank Manning’s racing stables were in Barry Street near the Warrigal Road railway crossing, only a few hundred metres from where we lived, one of many such racing stables in Mentone then. My parents listened to the baker’s tip but made comments that were non-committal, suggesting any horse could win.

‘Colonus is the horse. They say he’ll win,’ the baker insisted.

He left, hurrying through the rain to gee up the horse and call at his next customer. Dad picked up The Age and hidden at the back of the paper the preview of the Cup showed Colonus at 100/1 or thereabouts. I was only eight at the time but I seem to remember some comments that treated the tip as a joke as my father turned to the war news section of the paper with its dramatic articles about Stalingrad, Rommel in North Africa, and fierce battles in the Solomons. 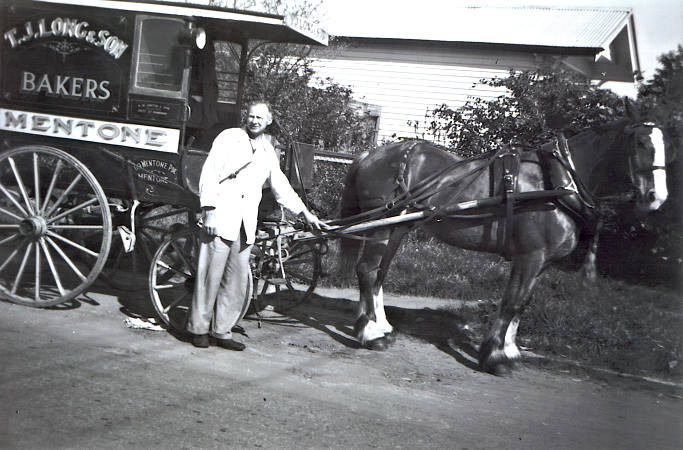 Baker and his cart and horse on his deliveries in Mentone, c1940. Courtesy Mordialloc and District Historical Society.

Despite the war Melbourne Cup time was still special. In the radio serial Dad and Dave which was hugely popular at that time there was a dramatic build-up to a fictitious cup race that was featured in the days leading up to the Melbourne event. In the show Dad had a horse running in the Snake Gully Cup and fierce rivalry between him and Ted Ramsay, a rather testy neighbour with his own runner, provided the drama. Of course Dad’s horse duly won. Its name was Gay Pride. It would not be called that name today would it!

We had the wireless on as the Cup field lined up in 1942. The favourite was Dark Felt but there were other fancied runners including Skipton, the 1941 winner, Tranquil Star, the top weight at 9 stone 3lb, and Great Britain. The star jockeys of the day had mounts; Scobie Breasley, Jack Purtell, Darby Munro and Billy Cook, the last two down from Sydney, were all there.

When the field jumped it was not long before Colonus hit the front and the further the race went the greater became his lead. This was against the intentions of the connections who had told Harry McCloud to hold him back until the head of the straight. When the field reached that home straight Colonus was many lengths in front and no horse made any impression on him as he went on to win by seven lengths, the greatest winning margin since Archer in the second Cup of 1862. The baker’s tip had been spot on. And it was the wet track that did it. Colonus, a four-year-old, was well down in the weights, carrying only 7 stone 2lb. His rider, McCloud, was just 18 years of age and still an apprentice. Colonus revelled in the very heavy conditions and was lucky to have such a light load by comparison with the better horses. Colonus, starting at 33/1, won from Phocion and Heart’s Desire. Dark Felt came fourth so the winner beat the horse that would win the Cup in 1943, as well as the 1941 winner, Skipton, who finished well back. Colonus had won a city race not long before the Cup but had put in terrible efforts in other lead-up events, so punters wrote him off. 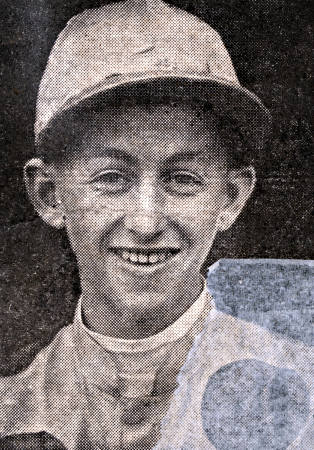 Frank Manning had not written him off and the win was a huge fillip for the Mentone trainer. The owner, a wealthy businessman called L.O.Menck, had bought the horse for £150, considered to be a cheap purchase at the time. He received £5750 for the win as well as £200 worth of war bonds. There was no gold cup for the Austerity Melbourne Cup. 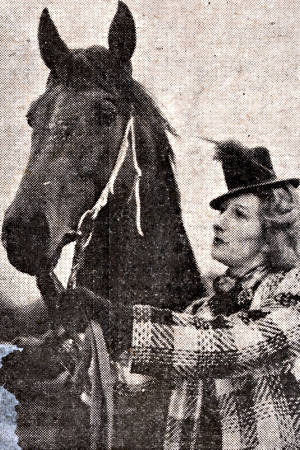 As far as I know my father, or any other member of the family, did not back Colonus. but the baker’s visit and the later Cup result gave Mum and Dad a good talking point for years after.