William Henry Bruton, aged 75 and blind, dictated his memories of Cheltenham and district to his daughter Eva during the late 1920s. Subsequently they were published in 1930 as Local History: Carrum to Cheltenham. William Bruton was born on 13 July1854 on his father’s property at Cheltenham. [1] This was a time when gold discoveries were drawing people to Victoria and exciting the population of Melbourne. It also was the year of political turbulence culminating with the Eureka Stockade. William married Elizabeth Teagle on the 2 March 1879 and settled down with her to farm nine acres of land on Point Nepean Road, Cheltenham. [2] There he worked as a market gardener. 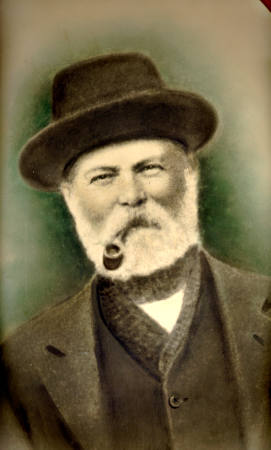 Together Elizabeth and William had ten children. The fifth child was Reuben William Gustavus who married Nellie Harriett Burgess. They in turn also had ten children and the third was named Alfred William who married Florence Wallace a daughter of a local gardener. It is on these two generations that this story is primarily focused.

Reuben Bruton, born and schooled in Cheltenham, was living in Brighton South (Moorabbin) in 1920 but in that year bought a property from F Follett in Heatherton; 18 acres on Old Dandenong Road. There he moved with his family to undertake market gardening. All the school-aged children were admitted to Heatherton State School No 938. Alfred, Sylvia, Nellie, and Edward who had already been to school at Moorabbin, commenced at Heatherton on 10 May 1920. Later they were joined by Clarence, Leonard, Hazel, Daphne and David. Alfred remained at school until 30 October 1925 and on reaching his fourteenth birthday, the age when compulsory schooling ceased, left school. However, he had gained his Merit Certificate the year before, suggesting he was a good student. [3] On leaving school he joined his father and Edward, a younger brother, working on the Heatherton property. 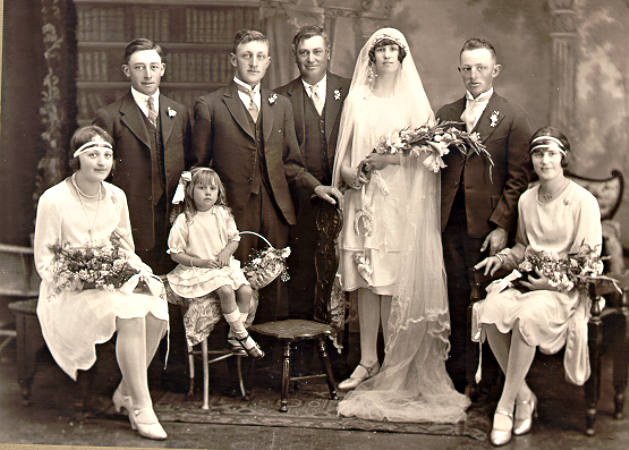 George Daff, whose family were neighbours of the Brutons, described the principal features of market gardening. The land was ploughed using a single furrow plough drawn by a horse. Raised beds six to five feet wide were created and then levelled by hand with a rake. Seed was sown in a specially prepared seed bed in an area touched by the sun, out of the wind and where it was watered by hand. It was from the seed bed that the seedlings were taken for planting in the raised beds. Planting of the seedlings by hand was intensive, back breaking work. Stable manure and a blood and bone mixture along with straw were used to fertilize the ground to aid plant growth. Weeding was done by hand or with a hoe, but chemical weed killer was also used. The main source of water was from rainfall. [4.] Bruton records show Reuben and Alfred were buying Irish cabbage seed, seed potatoes, and parsnip, carrot, beet, lettuce and white radish seeds from professional seed merchants in 1956/57. [5]

After a few years Alfred entered into a partnership with his father in planting and cropping the land in Old Dandenong Road. The produce was loaded on their truck and transported to the Queen Victoria Market where they had Stand 63 in Shed C at the growers’ markets of Tuesday, Thursday and Saturday. In October 1956, for example, eight loads of produce were taken to the market yielding an income of £698.10.0. Against that income expenses were incurred for cases, bone dust, market stand, ammonia, truck repairs, phone bill, bran, oil, turnip and lettuce seed. Twenty five pounds each week was paid to David Bruton as wages for his assistance in ploughing, planting, weeding and harvesting the crops. On some occasions produce was delivered to canneries. Two loads of beet were delivered to Fowlers in July yielding £158/16/6 and in September a load was sold to Gartside for £72/10/-. During that time potatoes, beets and onions were being grown on the property. Records of ‘Takings and Expenses’ for nine months in1956/57 shows income of £5033/0/4 against expenditure of £2878/1/1. The profit over that period of months was shared equally by Alfred and his father. [6]

Alfred first met his future wife at a dance and courted her for nine years before she agreed to marry him in 1942. Florence had been a student at Clarinda State School where she obtained her Merit Certificate. By the time of the marriage Florence Wallace was 30 years old, an age generally considered late to be taking on this new status. A major cause of the delay was religion. Florence came from a strict and devout Catholic family while the Bruton’s traditionally were adherents of the Protestant religion expressed in the beliefs of the Church of Christ. At that time and earlier there had been instances of distrust between these two branches of the Christian Church. [7] Finally the Wallace family supported the marriage but the Brutons remained cool. The wedding took place at Sacred Heart, Oakleigh but not before the altar. As Alfred did not adopt Catholicism the wedding ceremony took place in the sacristy but the happy couple were allowed to leave the church walking down the main aisle of the church. Other than Alfred there were no Bruton in the wedding party. 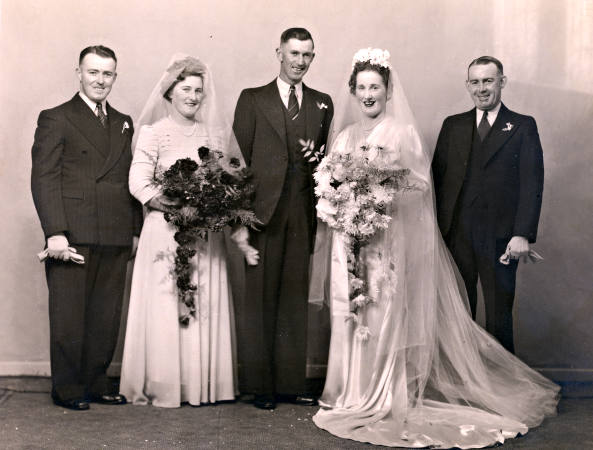 Alfred and Florence had three children, all brought up in the Catholic faith and educated in Catholic schools just as Alfred had agreed at the time of the marriage. [8] Margaret and her brother Leslie attended Our Lady of the Blessed Assumption at Cheltenham and it was from there that Margaret recalled delivering envelopes from the school head teacher Mother Mercedes to her mother. ‘Mother Mercedes would write a note to my mother pointing out a particular need of the school; new desks, new library books or some other equipment, and ask for £100. The letters would be left on the table and Dad would go to his store of cash, rolls of notes held together with an elastic band or string in a locked box hidden under the kitchen floor, and produce the required sum to be delivered to the nun the next day.’ Margaret expressed the view that the nuns knew that market gardeners always had cash and were not afraid of asking for donations to support the activities of the school. Subsequently Joy, and Margaret went on to Kilbreda College and Leslie went to St Bede’s College. By this time Margaret’s father had died and Florence was a widow with a substantially reduced income so she was not able to continue the large donations to the church. She sought some relief from school fees without success. [9] 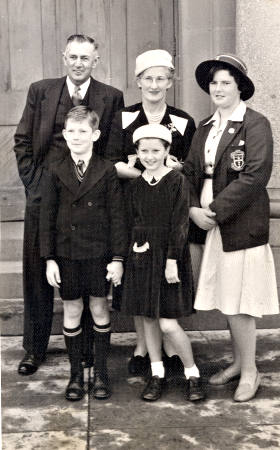 Market gardeners sold their produce at the Queen Victoria Market for cash. With cash they felt they could settle better deals when buying equipment, or purchasing other goods and services. Margaret Ann Bruton believed banks generally were not looked upon with favour. Working with a bank to negotiate a loan was often a tedious affair where it was necessary to reveal a great deal of private information. Also many market gardeners were suspicious of banks because of their experiences in the Great Depression when banks were closed and individuals lost money. It was common therefore for market gardeners to keep a substantial part of their money close at hand in a steel locked box, either in a secret place under the floor or hidden in a shed on the property, leaving a smaller sum in an account at a local bank. [10]

Alfred joined his father in the Old Dandenong Road property after leaving school and remained with him for thirty two and a half years. For the latter part of this time he was in partnership with his father in growing and marketing the vegetables, but his father retained the title to the land. According to Margaret, her father Alfred believed that the property was ultimately to be left to him. This was not what happened. [11] Rueben died on 24 August 1957, leaving the property and all his assets to his wife, Nellie Harriett. She died two months later, aged 70 years, in the Alfred Hospital without leaving a will. [12] As a consequence her assets were divided equally between all her ten children causing some animosity amongst them. [13] Matters in contention included free occupancy of the house, free use of the land and the sale of furniture. It was resolved that Sylvia Bruton (Mrs Peters), the individual occupying the house, would leave and Alfred Bruton would be permitted to continue farming the land to give him time to harvest the planted crops. However, the granting of this privilege was subject to the payment of the ‘fair rental’ of £9 per week. [14] Furthermore, the beneficiaries decided that the land in Old Dandenong Road should be sold. To this end, an auction to be held on the property was arranged for 3 April 1958. [15] 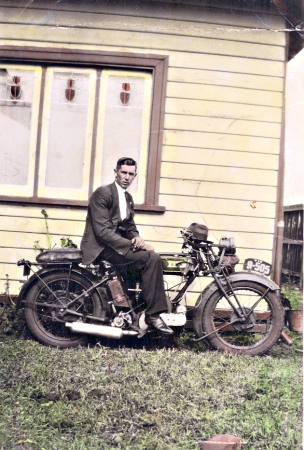 Alfred William on his motorcycle at 205 Old Dandenong Road in Heatherton. The Velocette Motor Cycle 500cc was purchased for £50-0-0. Courtesy Margaret Ann Bruton.

The property, described as being next to the store and Post Office and opposite the Heatherton school, consisted of well drained 18 acres and 17 perches of sandy soil varying from heavy to very light. There was a timber dwelling of about 10 ½ squares, labelled ‘nothing marvellous’ comprising four rooms and a large enclosed veranda. Two rooms and the hall were lined with lath and plaster while two rooms were lined with softwood. There was a new porcelain bath, chip heater and new enamel ‘Lux’ stove. There were several sheds on the property. The advertised terms were a deposit of one third of the purchase price, two annual instalments of £1000 each, and residue over three years. Interest 6 ½ per cent was payable quarterly. [16]

Alfred Bruton decided to bid for the property. His bid was the last given but the auctioneer did not acknowledge it and consequently the property was sold to the previous bidder, Mr Burgess. The land including house, bungalow, shed, stable and garage were valued by Burke and Scott of Cheltenham at £12,000. After the sale of all the assets of Nellie Harriett Bruton less expenses, £7035/6/0 was available to distribute to her heirs. [17]

Alfred Bruton now finding himself without land to work accepted an offer of his brother Clarence to sell him twelve acres in Elder Street, Heatherton. He and his family moved to Elder Street from the seventeen-year-old six roomed brick veneer house in Kingston Road built at the time of his marriage to Florence. It was in Elder Street house that he died from a heart attack at forty nine years of age on 25 May 1959 leaving Florence to care for three children. 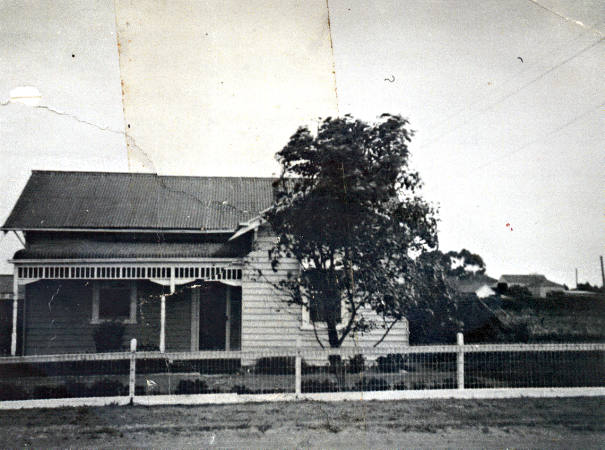 For a while Florence continued to work the property with the assistance of S Kelly who was employed for £18 per week. She was determined to survive. Her brother Charles and sister Winnie, although supportive, believed that a woman couldn’t be by herself, and encouraged her to consider remarriage. Shortly after, Frank Gunnies, a neighbour in Elder Street began to call on her. Later Florence told her three children that she and Frank were to be married at St Peter’s Catholic Church in East Bentleigh. This news was not greeted favourably by all, but her Aunt Winnie and Uncle Charles welcomed it. [18] After the marriage on 16 March 1963 Frank moved in with his new wife and her children on the Elder Street property. Frank left the home in February 1970 leaving the children with their mother who felt her responsibility was with them as they were still growing up. It was in December 2006 that Florence died. She was buried with Alfred Bruton, her first husband, at the Springvale Lawn Cemetery after a requiem mass at St Andrew’s church in Clayton South. 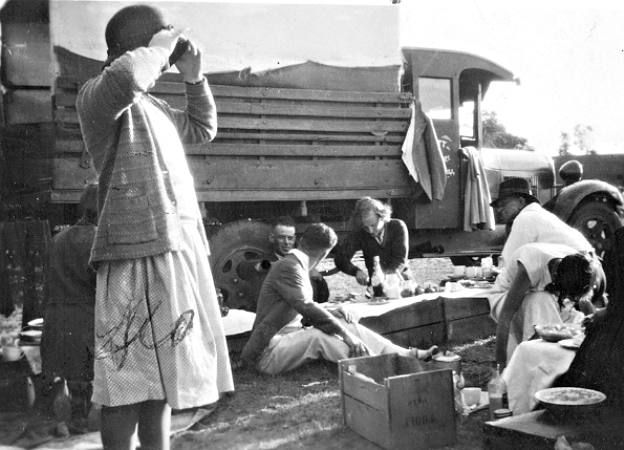 Members of the Bruton family at a picnic at Mordialloc.