In 1914 John Charles Mickelburgh settled with his family in Herald Street Cheltenham. There he established the poultry business known as All Varieties Poultry Farm. Shortly after arrival in Cheltenham he changed the spelling of the surname to Mickelburough, a more English sounding name than the one it replaced. It was a time when there was strong feeling in the Australian community against things German as Australian soldiers were experiencing heavy casualties against Kaiser Wilhelm’s troops and those of his allies. In the electoral roll of 1902 the name was spelt Meikleburg but this was probably a clerical error.

An English genealogist using a variety of sources including births, deaths and marriages, wills, apprentice records, Freemen records and court records has developed a large data base on the Mickleburgs. He points out that the name was spelt in a variety of ways. Few individuals in past centuries could read or write so when they gave their name to the Rector or Clerk making the entry on a record the person spelt it how he thought best. As a result, for example, early documents have a William Myckelborough ,1501, Richard Mekilborough of Olton in 1510 and Richard Mykilborowe of Barnby in 1558. ‘All the variations can be traced back to a small area in Norfolk where all these names originated.’ [1]

The first record discovered of the Cheltenham Mickelburough family in Australia was the marriage of John Mickelburgh to Catherine Mackay in Holy Trinity Church of England in Adelaide in 1851. The names of their parents were not recorded on the marriage certificate. However, the English genealogist indicates that John was born in Middlesex, London in 1814 to Jonathan Mickelburgh and Elizabeth Mickelburgh (Thomas) and died at 75 years of age in Melbourne. [2]

John George Mickelburgh, a son of John Mickelburgh and Catherine, was born in Adelaide in 1852 and married there twenty three years later. Shortly after his marriage to Isabella Sarah Pulling, John George with his new wife moved to Melbourne where they lived in Peel Street Windsor for a time before moving to Pomeroy, a house in Kew built by his father. The house, built on two acres of land on the corner of John and Sackville streets, was estimated to have cost between £1500 and £2000 in 1884-85, a substantial sum of money at the time. [3] John George Mickelburgh worked in insurance and was the manager of the Queen Insurance Company and later a sub manager of the Royal Insurance Company. After his death, John George’s widow, Isabella Sarah Mickelburgh (Pulling), sold the house in 1907 at a time when the Victorian economy had barely recovered from the depression of the 1890s, when banks and companies closed their doors and many people found themselves unemployed.

John Charles Mickelburgh, the first child of John George and Isabella was born in 1876 when the family were living at 4 Peel Street Windsor, eight years before the family moved to Pomeroy in Kew. It was from the Kew house that John Charles married Ada Flora Louise Arnold at St Mary’s, Melbourne on 15 March 1901. Together they moved to Camadai near Bacchus Marsh where John Charles took up farming and where a son was born the day after Christmas Day in 1901. The following year the young family moved once again but this time to Darnum in Gippsland where he named the eighty acre property Cloverlea. There John Charles initially kept a herd of dairy cows and a flock of thirty hens which were prolific egg producers. From an analysis of his carefully kept records he discovered that the hens were more profitable than his dairy herd so he switched his attention to poultry only keeping a few cows to provide for the milk needs of the home and fowls. Over three years he increased his flock from 30 to 1600 but then reduced it to 1150. The breeds he kept were White and Brown Leghorns, Black and White Orpingtons, and Silver Wyandottes. He also had Indian Runner, Pekin and Rouen ducks. The returns from the ducks were slightly more than those from fowls; but the cost of feeding ducks was a trifle higher. Thus the net profits were about equal. [4] 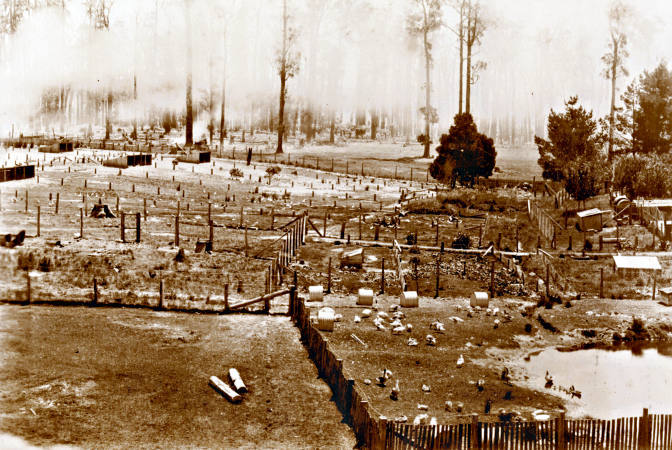 The farm at Darnum in Gippsland. Courtesy Richard Mickelburough.

A reporter from the West Gippsland Gazette described the Darnum property in 1912 as ‘a valuable one consisting of 80 large pens for the fowls and runs for the ducks. Each pen was large and roomy with egg nests made from kerosene tins enclosed in cases with one side cut out and a little clean straw placed on the bottom. The straw was burnt every week to destroy the vermin lurking there. Water was provided from elevated tanks filled from a well, and distributed to the pens through 2,000 feet of piping.’ Once the eggs were gathered, examined, and if necessary washed, they were stamped ‘Mickelburgh guaranteed’, and the production of each hen was recorded. As many as 5,000 eggs per week were sent to Melbourne, in a box specially designed by John Charles Mickelburgh to prevent damage, to be sold at auction. [5]

While at Darnum, four children were born to John Charles and his wife, Ada Flora Louise, making a family of five children that moved to Cheltenham in 1914. George Charles who was born at Camadai near Bacchus Marsh was joined by Horace Bowman (1903), Norman Arnold (1905), Violet Isabel (1906), and Flora Adeline (1911). John Charles moved from Gippsland in 1914 to Melbourne to take advantage of a more suitable climate for raising fowls and to be closer to the market for fowls and eggs. He took the opportunity to purchase a twenty acres property in Herald Street, Cheltenham, and set about moving the Darnum enterprise by train to its new site. There he re-established ‘All Varieties’ Poultry and Stud Farm a business that was considered in the industry to be a most up to date one. 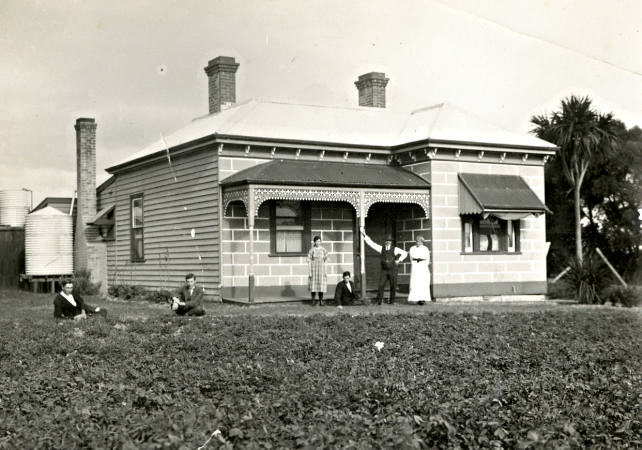 Shortly after his arrival in Cheltenham, John Charles, with the assistance of two other men, set about forming a poultry breeders association. This was the beginning of the National Utility Poultry Breeders’ Association. He was elected as the first State president of the association and later the first Federal president. He was also a committee member of the Poultry Breeders Cooperative Society at both the state and federal levels. At Cheltenham he was president of the local association. His extensive involvement in the industry included being a poultry judge and a lecturer on all breeds of poultry. John Charles Mickelburough, according to the Victorian Poultry Journal, was known not only as a breeder of heavy egg producers, but of ‘birds full of stamina and vitality’. He had a national and international reputation for his work as a breeder. Two of his birds were adopted as the utility standard by South Australian Breeders and birds had been exported to Africa, New Guinea and other world destinations. [6]

John Charles Mickelburough died suddenly on 17 July 1937 and was buried in the New Cheltenham Cemetery. Two of his sons immediately took over the management of All Varieties Poultry and Stud farm. George Charles and his family moved into the old family home and Norman Arnold moved with his family to a new home built by Tom Courtney on the property in Herald Street. Ada Flora, the wife of John Charles also lived in the new house together with her daughter Flora Adeline.

George Charles Mickelburough was working for his father when he met and courted Lorna Isabel Courtney from a pioneering Cheltenham family. Lorna was a trained horticulturalist and a gardener to Dame Nellie Melba at her property at Coldstream near Lilydale. She would ride her motor bike from Cheltenham to Coldstream each working day, a practice not common amongst women today and even less common at that time. George and Lorna were married in 1928 and went to live at South Belgrave where George for two years had been clearing virgin bush to establish the ‘Belnarre Flower Farm’. (The name Belnarre was derived from the names Belgrave and Narre Warren) In 1936 George and Lorna with their three children moved to Heatherton but stayed only for a short time before moving to Herald Street following the death of George’s father. While there two more children were born and George became immersed in managing the poultry farm and contributing to many community activities and groups. 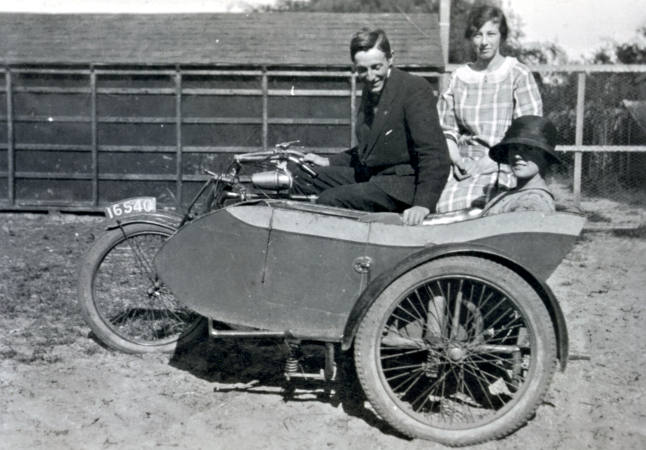 George Mickelburough on motor bike with Dame Nellie Melba in side car with his wife, Lorna, looking on. c1930. Courtesy Richard Mickelburough.

George Mickelburough was a committed member of the Church of England. As a young man George was a member of St Matthew’s Church in Cheltenham and served there later in life as a Sunday School teacher, vestryman, church warden and Synod representative. In 1954 he was the chairman of the Centenary Canvas, a stewardship program managed by the Wells Organisation from the United States of America, through which the financial situation of the parish was transformed. While he was living at Belgrave South, during his early married life, he was the instigator and voluntary co-builder of St Martin’s church. At Cheltenham as a fourteen year old he was a foundation member of St Matthew’s gymnastic club. Known for his boyish practical pranks, the story is told of the occasion when the gas mantles in the gas lamps in the church hall were broken, inhibiting activates of the gym club. George and his brother Horace borrowed mantles from the church. Their mate, Alec Field, was to replace them before the Sunday service but he forgot. The result was that there were no lights in the church. George’s father, John Charles ‘raised a storm because of the situation only to find his own two sons responsible. [7] 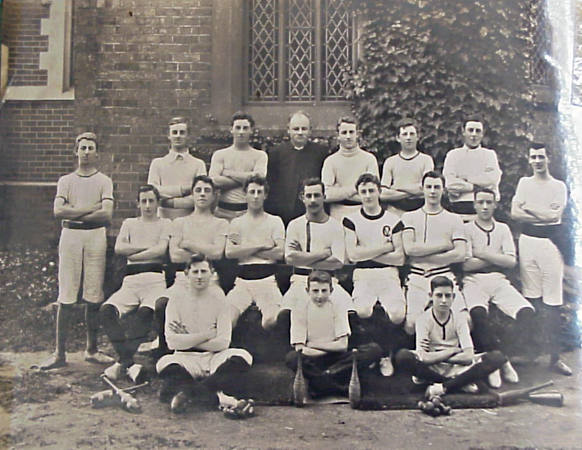 Community involvement included service as a councillor in the City of Moorabbin, a Justice of the Peace, a Bailiff of Crown Lands, President for twenty six years of the Cheltenham Park Planning Committee, a foundation member of the Cheltenham Community Movement and Progress Association, and a life governor and member of the Board of Management of the Mordialloc-Cheltenham Community Hospital,. These activities were in addition to his work in the poultry industry.

Like his father before him George Mickelburough was actively involved with the poultry industry beyond the Herald Street operation. He had completed two international diplomas concerned with poultry farming and breeding and was respected in the industry for his knowledge and practice. The Department of Agriculture recognised his methods and always found a clean farm open at all times for inspection. His advice was sought from many starting up in the industry.

In 1955 the Herald Street property was sold. George and Lorna moved to Heatherton where he started the Belnarre Hennery and Hatchery in Kingston Road. Their children had all established their own homes and taken on occupations outside the poultry industry. George and Lorna remained at Heatherton until they sold the business and moved to a unit in Chesterville Road Cheltenham. He died on 14 February 1982 at 80 years of age. Lorna died on 4 Feburary 1990 when eighty six years of age. Both were cremated and their ashes placed in the memorial garden at St Matthew’s Anglican Church, Cheltenham. [8]