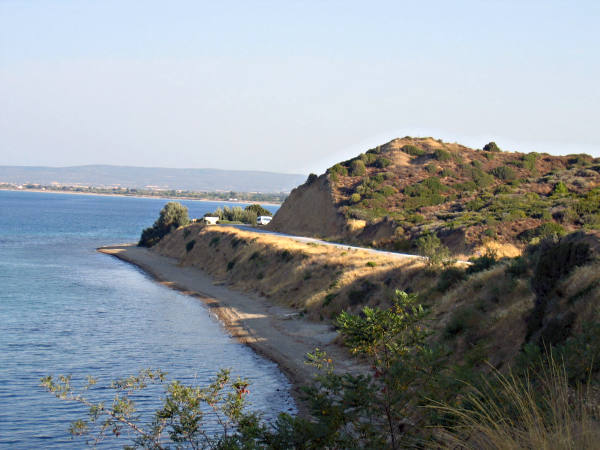 The Courtney family has a strong connection with Cheltenham. Thomas Wilson Courtney and his wife Mary Jane (Fleming) were residents in Cheltenham in the 1850s. Thomas was the first school master of the Church of England school in Silver Street [1] Thomas and Mary had twelve children, two of whom were born in Cheltenham, Thomas John and Jane. [2] Later as a civil servant, Thomas Wilson Courtney was stationed at Castlemaine but he died in 1906 at Coburg.

The eleventh child, William Wilson Courtney, a pharmacist, conducted the dispensary in Charman Road, Cheltenham, opposite the State School. Three of his brothers held the rank of Lieutenant Colonel during World War One, and one, Richard Edmund, commanded the 14th Battalion during part of the Dardanelles campaign. The position of the battalion was described as a precarious but critical one along the lip of Monash Valley in the heights above ANZAC Cove. [3] There were three posts, Courtney’s, Quinn’s and Steele’s. Courtney’s post named after Richard Edmund, was the scene of particularly ferocious fighting during the Turkish attack of 19 May 1915. The following letter was written by Richard Edmund Courtney while a patient in hospital in Malta to his elder brother Thomas John , also a colonel in the Australian army. Thomas at 58 years of age was in command of troop ships transporting Australian soldiers to the fighting front. [4] The letter describes graphically the grim realities of the battles on Gallipoli peninsula during the early stages of the Allied invasion in 1915. [5] 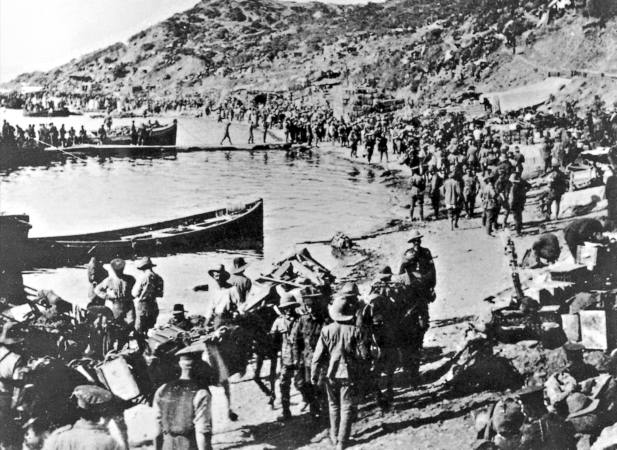 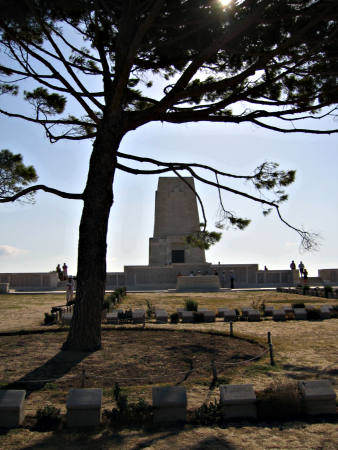 So the quiet day goes on, never much chance for sleep – too tired to sleep anyhow.
We get things in order, relieve the firing line and send the same old subalterns back to the trenches. We have no others to take their places.
About 4 o’clock, while at afternoon tea, I saw General Godley passing along the terrace towards me all smiles and his had stretched out as I went to meet him, and he was so kindly complimentary in his sincere remarks. I merely thanked him and told him ‘we had quietly done our job and would quietly go on doing it.’ Then he told me very nicely what a great fight we had put up, and, what we never knew before, that two divisions had attacked the line, the main attack being against Quinn’s and Courtney’s posts, and he told us of the awful slaughter we had made. Then he spoke kindly again and was more complimentary and I could merely gulp out “thank you” and my heart filled and the tears poured down my cheeks. I was broken by kind words when all the Turks on the Peninsula couldn’t move me, nor all the horrors of war. Such is human frailty. Such is a big fight from the warped memory of a sick C.O.
This fight I have described is only one of many, the biggest certainly, but we had the same thing every night almost for three weeks, once they kept us going for nine hours, but not so hot.
Looking back – Broadmeadows on October 1st – a mob. The work, the worry, then the sea trip and its new problems, all handled by the ship’s staff in such a way as to command success, but, of the worry. Egypt – new ways of worrying a C.O. and his imperturbable staff. Work, work, always but so cheerfully, because from October 1st everyone had tried so hard to do his bit. Then the final move to Gallipoli and another anxious wait for two or three weeks on the boat. “Will the men stick it?” “Have our methods been right after all?” “What will the verdict be?” Calm and confident through it all and never a hint to a soul that I was even troubled with such a thought, but I was much troubled too – I blamed my liver and my neuralgia. Then look at our landing. All that Sunday night we lay off Anzac Cove and the wounded were being brought to our ship, already crowded with the Battalion and over 700 wounded were taken aboard. 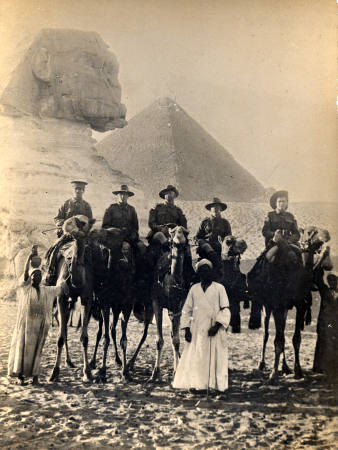 This was our first introduction to real war. There were my pals. Poor old Frank Le Maistre tied up and almost bereft of his senses – never will I forget it all, much less the Monday which followed. We found two destroyers alongside after breakfast and into these we crowded and started for the beach about a mile away. Some silly shrapnel got about us but didn’t touch our boat, had a rotten feeling all the time though. About 600 yards from land we clambered across into lighters and our first casualty occurred, not in my boat, a man was killed by shrapnel which was now welcoming us too closely and we kept ‘ducking’. Out of the lighters and we hope to get right at it and relieve our feelings – but no – we simply assemble and get as many as possible separated from the crowd of all sorts on the beach and then we huddle up against the hill and try to make shelter. Room for about 100 all told out of nearly 800; the rest were exposed and it is one of the mysteries of that day that not a shell landed on the mass of men, where later on hardly a man was safe; but the beastly shrapnel kept bursting over us and landing in the sea not far away, and there we lay all day and all that weary night being ‘blooded’’ to fight in this nerve-racking way and never a chance to fire a shot or relieve our feelings.
Yes, and look at the awful Tuesday. At 10.30 a.m. we move up the valley, a rough track then, can go only in single file, shelled all the way – a few men hit. We reach the top finally in pieces and then began our real meeting of lead and here the story is too complicated to put on paper easily. Sufficient to say I found myself in command of Quinn’s and Courtney’s Posts, as they are now named – the two hottest places in the line, and so my command lasted for four days till I was relieved at Quinn’s. The first day I lost Jack Adams, my second in command, and Captain Hoggarth. Two other Captains had gone sick before we landed. In three days I had lost five Captains, four Subalterns, and myself fell a victim to the flu. It was awfully cold at nights and at times it rained, but harder than all the Turks kept up an incessant attack on these two posts and our losses were naturally heavy. The number I omit at present. But I couldn’t go ‘sick’ not much; the really superhuman bravery and calmness of the officers and men in the three days of awe, of death, and of hardships which never ceased for a moment are quite beyond my expression – beyond what any man could ever expect and far beyond all praise. Only the absolute confidence in the battalion – a confidence begotten by watching the training of all ranks closely for seven months and intimate knowledge of all ranks kept me ‘clothed and in my right mind’. Really I never feared a break, close as we must have been to it at times. Now in calm retreat I almost give way to emotion as I look back on the men who did that job. Yes, and those who gave their lives in doing it.
I didn’t mean to worry you Tom with all this detail, buts I have just wandered on and one and it relieves my feelings, so you must forgive my prolixity, but don’t think I have told you all or half, I have omitted much and a good deal purposely It can keep and will fill in the remaining causes of my banal break-up possibly.
Well, after a few days I get rid of Quinn’s Post and we consolidated Courtney’s Post, and for a fortnight we were at it nightly almost without exception – the same story as I began with but not always so hot.
Let me close with this outline. I can give anyone details by yarning if ever anyone want to hear about what Ian Hamilton described as “The bloodiest fighting I’ve ever known.” 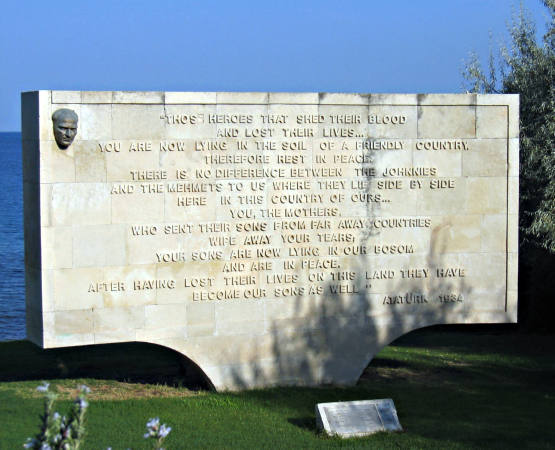 Memorial at Anzac Cove commemorating the loss of thousands of Turkish and Anzac soldiers contains the words of Mustafa Kemal Attaturk, a leader of Turkish troops at Gallipoli and first president of Turkey. Courtesy Pam Whitehead.

Richard Edmond Courtney had graduated with a Bachelor of Arts and a Bachelor of Laws from Melbourne University and in civilian life was a solicitor. On the 8th of September 1914 when 44 years of age he applied for a commission in the Australian Military Forces and was appointed as the commanding officer of the 14th Battalion. His military service commenced as a bugler in the Castlemaine Victorian Rifles and concluded in April 1916 after 32 years of service. Two years earlier he landed with Australian and New Zealand troops at ANZAC Cove and after a short time of ferocious fighting was conveyed to the hospital of the Blue Sisters at St Julian’s, Malta. It was from there that he wrote the above letter to his elder brother. On 28 June 1916 he was admitted to Lady Meynell’s Hospital in London with heart strain. After eleven days he was discharged and appeared before a medical board where he was classified as unfit for general service but could undertake light duties at home; no route marching or severe exertion they advised. He left England on 17 March 1916. Seven months later he was acting Commandant of the 5th Military District in Perth and three years on he was dead. [6] 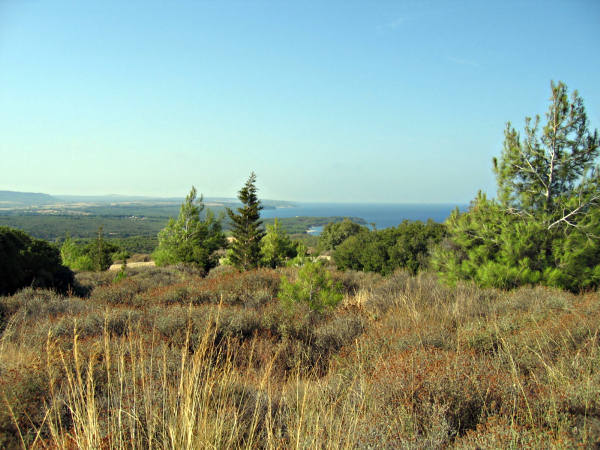 View of Gallipoli from the Australian and New Zealand Memorial, 2008. Courtesy Pam Whitehead.