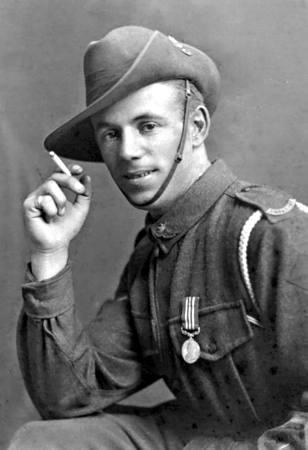 Claude Milton Rich Nuttall of Cheltenham, who fought in France in WW1, was wounded in the thigh and later killed by a sniper in August 1918.

1Claude Nuttall was a Cheltenham boy, born to Frederick William Nuttall and Emma Maud Louisa Nuttall (Rich) on 3 July 1895. He was the eldest of four children. His three sisters were Marjorie, Adeline and Freda. After attending Cheltenham State School he commenced work in a foundry as a brass-finisher where he removed burs and marks from brass objects. He joined the Cheltenham junior football team where he was credited with kicking a winning goal against Elsternwick in 1914 when he was 19 years of age. It was reported that the match was ‘on the willing side throughout with both sides playing for all they were worth.’ 2 At that time it was said it was becoming difficult to field teams in the competition because so many of the young men had volunteered to fight in Europe against German imperialism. It was twelve months later that Claude also joined the Australian army becoming a member of the twenty third battalion. 3

Frederick Nuttall, Claude's father was born in South Yarra in 1864 while his mother was English, born in Sussex in 1874. At the time of their marriage they were living in Farm Road, Cheltenham, and it was there that they were married on 2 June 1894 by the Rev Alfred Henry Bryant, a Christian Minister associated with the Cheltenham Church of Christ.4

Frederick was employed as a storeman in the general store located on Point Nepean Road while by 1900 his wife was conducting a crockery and tinware shop between the railway station and Railway Avenue in Charman Road.5 In 1916 Emma Nuttall was placing a regular advertisement in the local newspaper soliciting customers for her shop opposite the railway station where she sold confectionery, soft drinks, stationery and a variety of toys made in Australia and imported from England and Japan.6 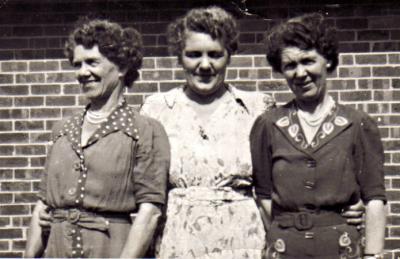 Claude enlisted in the Australian Imperial Forces on 12 July 1915 a few days after his twentieth birthday. On that occasion he was described as having brown eyes and hair with a sallow complexion. He was five feet seven and a half inches tall weighting eleven stone seven pounds. He embarked for Egypt on 27 September 1915 on HMAT Hororato as part of the reinforcements for the 23rd Battalion who were at that time still fighting the Turks at Gallipoli. The battalion had landed at ANZAC Cove, been involved in heavy fighting at Lone Pine and remained on the peninsula until December of 1915. Claude joined the 23rd at Tel-El-Kebir, Egypt, in January of 1916. Along with other members of the battalion Claude left Alexandria arriving at Marseilles France on 30 March on route to joining the British Expeditionary Force fighting the Germans. By 10 April 1916 the battalion was occupying trenches in northern France and was engaged in the battles of Pozieres and Mouquet Farm when it was estimated that the Battalion lost almost 90 per cent of its original members.7

It was in August of 1916 that Claude was awarded the Military Medal along with three colleagues for an action of bravery in the field that took place the previous month, on the day of his twenty first birthday. The four men volunteered to rescue two wounded members of the 14th Battalion who had fallen near the German lines. The rescue took place at four o’clock in the morning in full daylight. A number of wounded of the 14th Battalion raiding party had previously been brought in by stretcher bearers of the 23rd Battalion during darkness.8 It was four months later that Claude was himself wounded while in action. Wounded in the thigh of the right leg he was evacuated to the First Australian General Hospital at Rouen and subsequently to the Stourbridge annexe of the Southern General Hospital in England, less than fifteen miles from Birmingham.. There he remained for almost four months until his discharge on 1 March 1917. Following a fourteen day furlough in Stourbridge he reported for duty at Perham Downs. Then followed several postings to several military establishments in England. 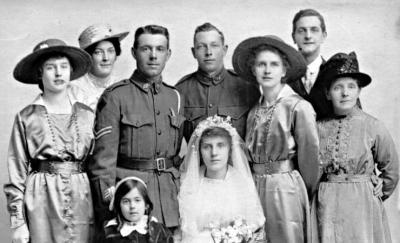 In January 1918 Nuttall was a member of the Permanent Cadre Overseas Training Brigade at Tidworth, training new recruits in warfare strategies and modern weaponry including the use of Mills bombs. In that same month he was charged with failing to obey an order given by a superior officer and as a result received an admonishment from a captain. This was a blemish on what appears to be exemplary military service during which time he had been promoted to corporal. On 7 May 1918 he rejoined his battalion in northern France, seeing considerable action including regular gas attacks and shelling.9 In his diary entry of 9 May, Claude recorded his good fortune when a German shell landed only two feet from him but failed to explode.

The stay in the hospital at Stourbridge was a significant time for Claude Nuttall not only because it allowed him to recover from his wounds but because it was during this period that he met an eighteen year old girl whom he married. Violet Alma Mary Palfreyman lived at ‘Glen Cairn’ South Road, Stourbridge and worked in a sweet shop, and brought sweets and cigarettes in for the soldiers in hospital.10 They were married at the Church of England parish church of Wordsley a small country village two miles to the north of Stourbridge. At the time Claude was stationed at Sandhill Camp, Longbridge, Devarel a small village in West Wiltshire.11 The bestman at the wedding was Arthur Maurice Gains a fellow soldier also stationed at Longbridge with the Overseas Training Brigade. He was a member of the 22nd Infantry Battalion enlisting 15 July 1915 in Melbourne and had seen service in France. Although born in England and demobbed in England at the conclusion of the war, he was living at Cheltenham, Victoria in 1941.12 Claude and Violet as a married couple had little more than thirty days together before Claude was ordered to proceed to France. He rejoined his unit in May 1918 and by 13 August 1918 he was dead, killed in action.13 14

The last two entries in Claude Nuttall's diary were written August 9 and 10. There he wrote

The next day he wrote,

Heavy bombardment by our guns. Push still in progress …Packed up ready to move forward again. Prisoners still coming back. Wrote to Violet.

The Battle of Hamel took place on 4 July 1918 when two Australian infantry brigades assisted by American troops, British tanks and exceedingly accurate artillery barrages quickly overran German positions and took 1,000 prisoners. The Battle of Amiens which took placed over four days from 8 August involved infantry, artillery, tanks and aircraft saw an advance of twelve kilometres in the early afternoon of the first day and a vast number of Germans being taken prisoner.15 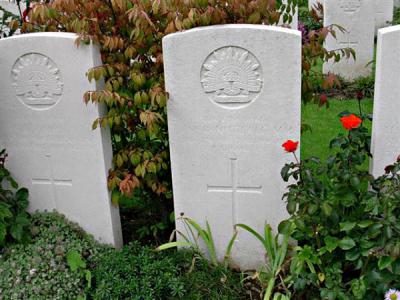 The circumstances of Claude's death are not clear as the reports from witnesses vary.16 However the pages of his diary are stained with what appears to be blood and the top corner of his dairy are badly damaged suggesting the impact of a bullet. Assuming he carried his diary in the top left pocket of his tunic this suggests the bullet that killed him was to the left upper chest.17 Private Standing said Claude was shot through the body by a sniper about nine o'clock in the morning on the 13 August whilst on a daylight raid. It was a task for which he volunteered. Standing commented Claude was ‘a very fine chap’. Private Hutson also praised him ‘as one of the best soldiers we had.’ but believed he was killed by a sniper's bullet to the head. This observation was confirmed by Private Green who was a member of the same party attacking a machine gun post at Amiens. Others said cause of death was a machine gun bullet to the heart. Private Prior reported ‘we had just taken some trenches when Cpl suddenly stood up and exposed himself. He was immediately killed by a German bullet. No one knew why he did this. His body was taken away from the line in a limber wagon.’ Subsequently he was buried at Heath Cemetery, one and a half miles north of Harbonnieres in France.

Back in Corporal Claude Nuttall's home town of Cheltenham the notice of his death was published in the local newspaper. There his award of the Military Medal for conspicuous bravery and his recent marriage to an English girl were also noted.18 Some months later, just prior to the day the armistice was declared in Europe an in memoriam service was held at St Matthew's Church of England, Cheltenham recalling the life of Claude Nuttall. Conducted by the vicar before a crowded congregation, Claude's involvement with the church as a young man was mentioned. It was said that he was well and favourably known in the community and

possessed moral courage sufficient to withstand ridicule and sneers on being religious and devout and clean living.

Speaking from letters from his commanding officer and chaplain, the preacher commented on Claude Nuttall's uprightness of conduct, devotion to duty and splendid influence for good and unlimited self sacrifice.19 Today his final sacrifice is still recorded on an honour board in the church and on a broken column memorial to community members who fought in World War One located in the memorial park behind the Returned Servicemen's Headquarters in Centre Dandenong Road, Cheltenham.