The Cheltenham Park was set aside as a public park by government statute in 1872 and the Moorabbin Council became responsible for its management in 1879. [2] . Since that time sections of the park have been devoted to a variety of purposes including sport, a school, a cemetery, a nightsoil depot and cattle grazing. But it was in 1902 that some local citizens became concerned that insufficient attention and care was being given to this noteworthy asset. At the meeting of the Cheltenham Literary and Debating Club a speaker said the park was sadly neglected and simply allowed to run riot. [3] Some people saw the park as the means of improving the town and attracting those picnic parties and visitors passing through on their way to Mentone and Mordialloc. Almost four years later a proposal to add to the ‘beauties of Cheltenham’ was suggested to council.

V Wawn, a local chemist and secretary of the Cheltenham Lawn Tennis Club, wrote to the council proposing that the tower in the Mentone Recreation Hall yard be removed to Cheltenham and placed on the Moorabbin Hill, a high point in the Cheltenham Park, behind the tennis club. The council had only recently purchased the reserve at Mentone from the Mentone Recreation Company, a company which had experienced severe difficulties in the 1890s and consequently had neglected to maintain its facilities. The council rejected Wawn’s bold proposal forcing him to consider alternative ways of achieving his goal. He canvassed the town for subscriptions and entertainments were organised to raise the money to build a lookout and band rotunda. He approached the local branch of Australian Natives Association and asked for their support. 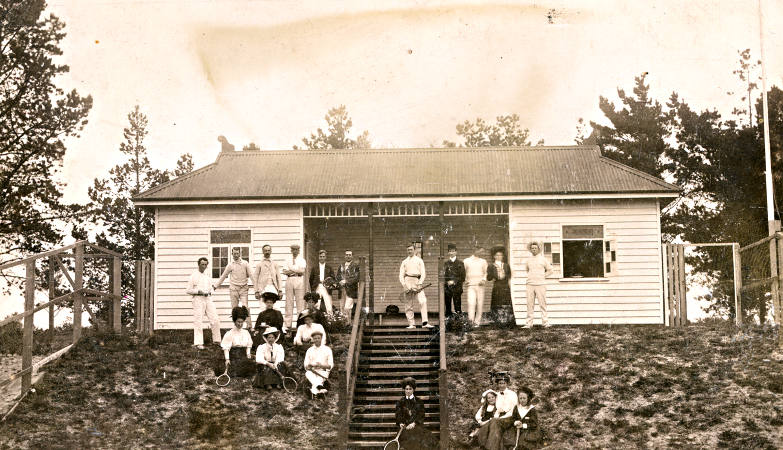 A rough plan for a lookout was prepared. The structure was to be 40 feet high and 12 feet wide at its base with a zigzag stairway leading to the lookout. The bandstand was to be placed about ten feet from the ground. The estimated cost was £70. [4] While a reporter in the local newspaper supported Wawn’s actions he believed what was really needed was to have the park cleared, running and cycle tracks put down, and gardens planted. He also believed that a small lake could be formed at the bottom of the hill where there was a swamp overgrown with reeds and rushes. With these developments he saw the park becoming one of the best picnic and sport grounds outside Melbourne. He did acknowledge these developments would be expensive, possibly costing several hundred pounds, but he pointed to the success at Mentone where residents readily contributed to a levy to purchase and develop their reserve. Going further, he thought the Premier of the State, Thomas Bent, ‘who has a warm corner in his heart for Cheltenham’ might be persuaded to tap the Treasury for a few hundred pounds. [5]

Four months later, in March 1907, after a continental fete was held at the tennis courts, the great possibilities of the Moorabbin Hill were again raised. The fete attracted many people who expressed surprise at the beauty of the location. While acknowledging the dense scrub of ti-tree would have to be cleared the result would provide a magnificent view of the mountains on one side and the bay on the other. Pointing to £200 or £300 being spent on roads in Mordialloc, a palatial hall to cost £800 at South Brighton and money being spent at Mentone for various projects, the local news reporter suggested Cheltenham was at a standstill despite the fact that it was the metropolis of the Shire of Moorabbin. To find the money he suggested a rate of 3d on residents and an open air concerts each month on the hill where an admission charge would be made. [6]

Three years later councillors acknowledged little had been done despite the promise to spend £25 drawn from the budgets of each Riding while the park continued to be used as a nightsoil depot. Cr Scudds of Mentone pointed out that the money was offered on condition that cattle were kept out of the park. This had not been done. He warned that unless this was achieved spending money on the park was like throwing it over the end of the pier. In his reply Cr Brownfield commented that the council had received a recommendation that money should be spent on fencing but this had not been followed through. He believed it was the council’s responsibility to see that the fencing was kept in good repair. [7]

Progress in improving the park continued to be slow. What advancement there was was attributed by South Riding Ratepayer, a correspondent to the local newspaper, to that ‘progressive young councillor the honourable member for Mordialloc,’ Cr Dave White. [8]. This was a harsh assessment given the efforts of individual councillors. F Crawford complained that there was no supervision of the work being done in the park and therefore there was every chance of the money spent being wasted. [9] But from April 1912 there were modest signs that the park was receiving some attention. J Oliver, the curator of Queen’s Park in Moonee Ponds, was engaged by Council to make recommendations for action and to implement them. He presented a plan and reported in that month that paths had been pegged out, and sought permission to undertake planting. In addition he asked what amount of money he could spend. The following month he was informed of Council’s allocation of £100. [10] A few months later a person writing to the Moorabbin News commented that the park was ‘being laid out nicely by a special man from Essendon’, and that there was to be ‘a lovely gate, a new picket fence and other improvements near the tennis courts.’ [11] A later request from the Cheltenham Progress Association asked that a sign ‘Cheltenham Park’ be placed over the entrance gates in Tulip (Park) Road. 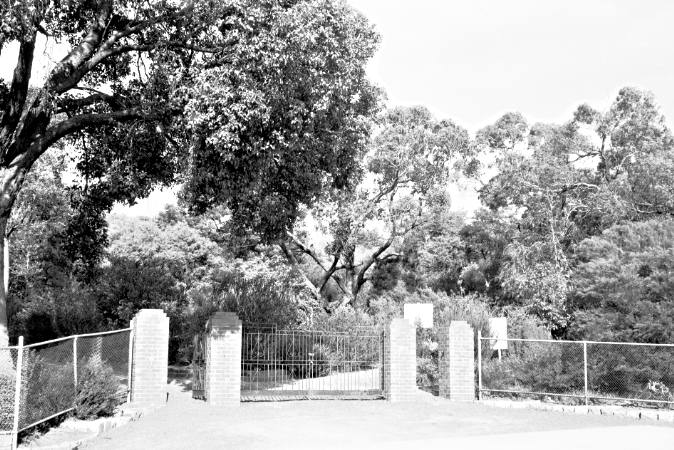 Some years later the Cheltenham Progress Association was once again discussing the condition of the park. The chairman, F Livesley, thought the scheme drawn up by Oliver could be revived with profit. Obviously Oliver’s plan had not been fully implemented. W C Williams, who spoke at the meeting, reported at length on his observations. He believed the fine natural park could be improved at a cost of about £500. He suggested a general clean-up was necessary, as well as the removal of dead trees, cutting off overhanging limbs, the construction of two small shelter sheds and a rotunda, some seats, small lawns and gravel roadways. A sub-committee was formed to consider the whole question and to report to the association at a later date. [12]

The Lands Department of the Victorian Government expressed interest in the management of the park by the Council and its trustees and called for a statement of receipts and expenditure. In addition the Department wanted to know how the reserve was used, strategies employed to ensure its development, and the value of the improvements carried out. [13] A reporter in the local newspaper gave his assessment in a description published in the Moorabbin News in August 1921. He saw the need for spirited citizens to donate a bandstand from which performances could be given on Sundays and week nights during the summer. He called upon the trades people to set a scheme of improvements in motion because he saw they would reap enormous benefits. While he agreed the trustees had spent money on the park most of it had been wasted as improvements had not been sustained. In many places the paths over time had become overgrown with weeds and tussocks, and young trees had sprung up obstructing the walkways. He drew attention to the natural sports oval in the centre of the park surrounded by sand banks where pavilions or grandstands could be erected. Another beautification initiative he suggested was the creation of a lake, a wild fowl sanctuary, where children could witness ducks and swans disporting themselves. [14] Similar views were expressed by Sympathetic almost four years later. [15] 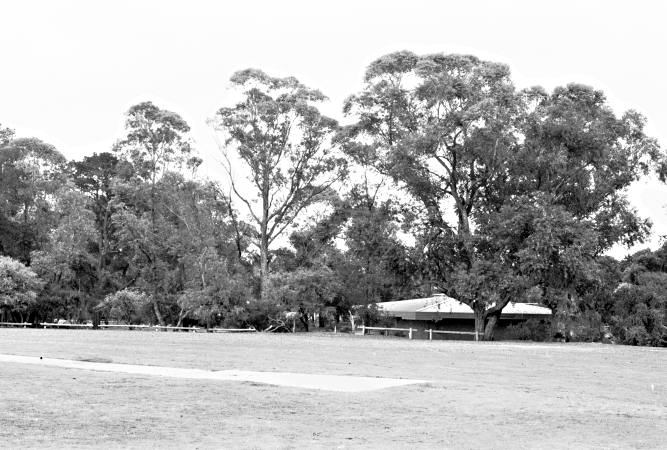 By 1926 the local newspaper was reporting some improvements even though they were minor in nature. The entrance gate and adjacent picket fence had been repaired and painted while the name Cheltenham Park had been painted ‘in black lettering on a white ground in distinctly bold letters.’ [16] A few years later toilet facilities were erected in the park for the benefit of picnickers and visitors. However, shortly after their opening concern was expressed about the wanton and deliberate destruction of these public utilities supposedly by ‘those of irresponsible age’ and it was suggested that it behoved parents to impress upon their children ‘respectful observance and use of public utilities generally.’ [17] Mention was made of obscene drawing and writing on walls, paper rolls thrown into cisterns, taps left running, basins broken and toilet rolls strewn about the park

Once again, but twenty two years later, in 1951, local organisations were concerned about the neglected state of the park and asked the Moorabbin Council to call a public meeting to discuss what should be done to correct the situation. The resulting public meeting elected a park planning committee to advise on actions to be taken in approximately thirty acres of the park at its eastern end. A committee of twelve including the three councillors from the Cheltenham Ward were appointed. George Mickelburough was the first president, remaining in that role for twenty years. [18] Plans were implemented to plant suitable native flora and to encourage more bird life. There were proposals to involve scouts, guides and school children in the collection of seeds, particularly coastal ti-tree, and a suggestion that a lookout tower be built with a kiosk at its base, somewhat similar to that first suggested back in 1906.

In 1976, the twenty fifth anniversary of the formation of the Cheltenham Park Planning Committee, the president, Cr Frank Le Page, reported that the park was a pleasant place where people could walk and view the various kinds of native plants that thrive in the Cheltenham sand. The general character of a bush park had been successfully preserved while at the same time limited provision for sport and visitors had been provided with ovals and electric barbecue facilities. Through the actions of the Cheltenham Rotary Club a children’s adventure playground was installed. In spite of these developments it was recognized that the preservation of the beauty of the park was a task requiring ongoing and regular attention. 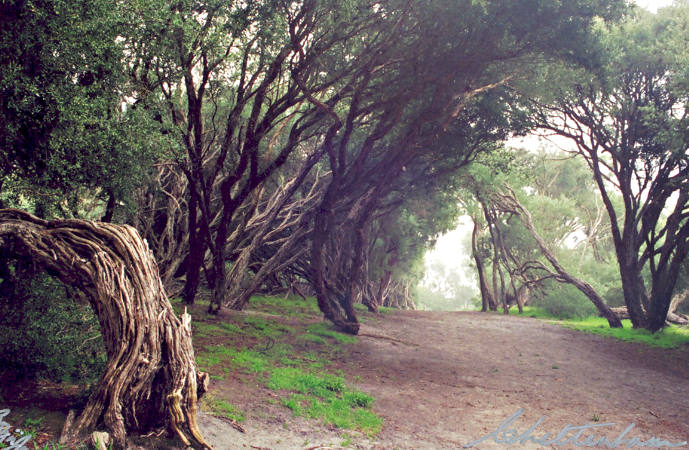 [1] A government survey in the early 1850s set aside an area of land as a Reserve. This area was bounded by today’s roads: Reserve Road, Park Road, Weatherall Road and Charman Road. Since the survey a significant part of it has been whittled away by grants, assignments and sales. In 1863 eight acres was set aside as the South Moorabbin and Mordialloc General Cemetery. The Presbyterian Church was granted one acre three rods twenty six perches in 1869 to be followed by a similar sized grant to the Wesleyan Church in 1870. Both grants faced Charman Road. In the same year land was provided for the building of Beaumaris School, later to be renamed Cheltenham State School No 84. It was two years later on July 26, 1872 that the Cheltenham Park was listed and described in the Government Gazette. Subsequent to this event several acres were sold to different purchasers. James Phelan purchased 136 acres 2 rods 17 perches, a significant portion of the total reserve in 1875. The following year saw J Rusk, Crawford, W Cook, and Fraser, individually making purchases. Some of this land was subdivided and sold in 1888 during a land boom at substantial profit. Therefore by 1902 the size of Cheltenham Park had considerably been reduced in area.