Teacher Exams in the Nineteenth Century 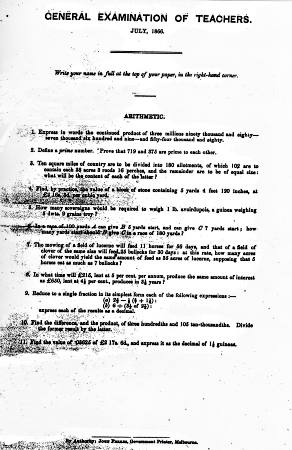 The certification of teachers has been an issue since the early days of the colony of Victoria. In 1851 Hugh Childers feared that a large proportion of teachers in the colony were ‘by no means competent.’ ‘Several,’ he wrote, ‘were hardly able to write legibly and many were ignorant of all but the first rules of arithmetic.’ [1] Since that time an array of measures was introduced to improve the situation which impacted on schools such as Cheltenham (known as Beaumaris) and Heatherton. (Sometimes these same measures were later curtailed or abandoned to save money or to be replaced with something better.) Training institutions and training schools were established, a pupil teacher system was launched and an exam schedule created which teachers or prospective teachers were required to pass if they wished to gain registration or promotion in primary schools.

In 1855 examination subjects for individuals wishing to join National Schools included Art of Teaching, Grammar, Geography, Arithmetic, Political Economy, Writing, Book Keeping, Mensuration and Latin Grammar. Only the first five subjects were required for women, perhaps in the mistaken belief common at the time, that women were intellectually inferior to men. Moreover, women were prepared for the lesser role of assistant in a school rather than for taking on greater responsibilities in the management of the enterprise. [2] Inspector Richard Budd devised a scheme for the examination and classification of teachers and it was the Denominational Board, for whom he worked, that expressed the wish that a ‘complete system of classifying teachers, and paying them in some measure according to their certificates’ would be introduced. [3] [4]

The following questions are taken from teacher examinations of 1866 in the subjects of Grammar, Geography and Arithmetic. The papers were provided by Margaret Jacobs of the Chelsea and District Historical Society.

Parse the following sentence, giving the full syntax of each word:-
“James, upon whose advent much depended, arrived so late that his troops had not time to assemble.”

Give the three principal parts, viz., the present and past tenses, and the complete participle, of each of the following irregular verbs – burst, read, sweat, bless, sling, sing, chide, hew.

Write out the five fundamental laws of Syntax.

Correct any grammatical errors you may observe in the following sentences:-
“The greater part of their captives were anciently sacrificed.” – Robertson.
“The other party is by no means inferior in the felicities of their style.” – D’ Israeli
“The blessings which political and intellectual freedom have brought in their train.” – Macaulay.
“Each of which have stamped their own impress on the characters of the people.” – Alison
“Early to bed, and early to rise
Makes a man healthy, wealthy, and wise.”

1. Give a definition, and state the origin, of each of the following terms:-
Tropic, equator, continent, isthmus, delta, strait.

2. Name the large divisions of land in the order of their size, and state approximately what proportion of the land on the earth’s surface is comprised in each.

3. Name the highest mountains in each of the continents; state also the direction of their course, and their approximate height.

4. Arrange in order of their size the following islands, and state where each is situated:- Ireland, Jamaica, Madagascar, Niphon, Papua, Sicily

Define a prime number. Prove that 719 and 375 are prime to each other.

Ten square miles of country are to be divided into 180 allotments, of which 102 are to contain each 38 acres 3 roods 16 perches, and the remainder are to be of equal size: what will be the content of each of the latter?

Find the difference, and the product, of three hundredths and 105 ten-thousandths. Divide the former result by the latter.