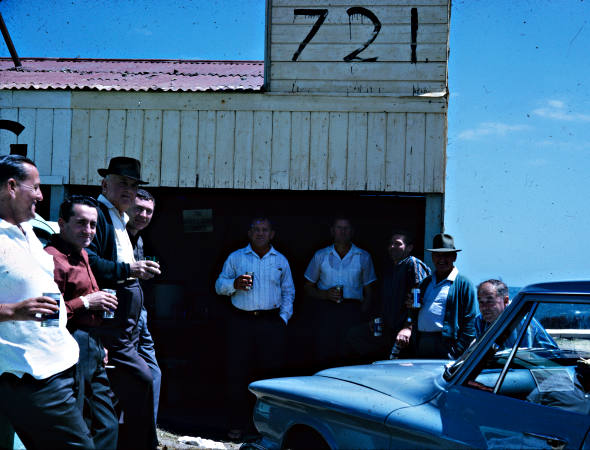 Recently at a wake to honour a local Mordialloc identity discussion turned to reminiscences about earlier times and mention was made of the ‘desecration’ of a local historical feature. The number 721 painted on the Reg Nicholson Pavilion on the Mordialloc beachfront had been obliterated. Harry Stanton , formerly the publican of the Kingston Hotel, complained, ‘How dare they. You can’t take away that number.’ He was joined by others expressing similar views. Hazel Pierce, a living repository of Mordialloc’s history, commented ‘It was dear to a lot of hearts.’ Because of these comments you might ask ‘Why the fuss over a few numerals painted on a simple structure?’

It was at the original shelter shed built on the Mordialloc beachfront opposite Epsom Road that some Mordialloc residents or supporters of the football club met late Saturday nights and Sunday mornings after a football match for ‘a drink’. This practice commenced in the late 1950s when six o’clock closing of hotels was in force. Publicans were not permitted to serve liquor after that time and local hotels were closed on Sundays. [1] As Chilla Dow explained, ‘You had to go somewhere if you wanted a drink.’

It was a mixed group that assembled at the shelter shed. There were horse trainers, strappers, footballers, a few women and even an off duty policeman. Hazel Pierce said there could be more than twenty people there on a Saturday night, particularly after a win by the local team. ‘There were fewer on a Sunday morning, perhaps about a dozen.’ Joan Thompson who lived on Beach Road would set up hurricane lamps at the pavilion and the 18 or 9 gallon keg with its remaining contents was brought down on the back of a ute from the tin shed that constituted the club rooms in Mc Donald Street to the pavilion. There the party consumed the liquor, engaged in friendly banter about the match and enjoyed a merry sing-song until late into the evening. Some returned the next morning to drink any remaining liquor before departing to home for lunch. There were occasions when the keg had to be supplemented with bottled beer or a slab due to the heavy demand placed upon its content during the football match. 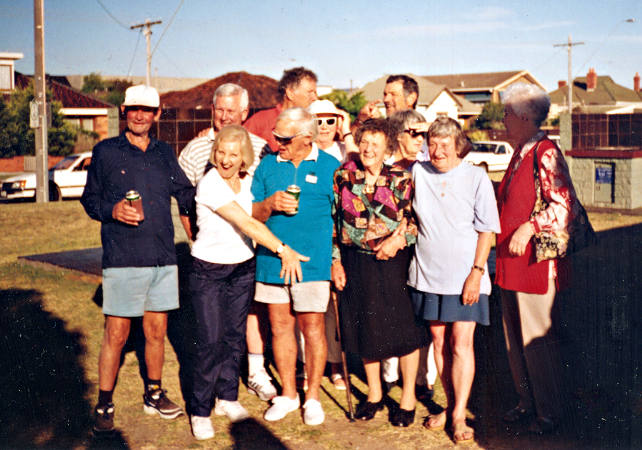 At one of the sessions the participants decided that their gathering deserved a name. Several of the Mordialloc boys attended a dance on Sunday evenings in St Kilda Road near the Blind Institute and it was the source of the ‘inspired’ name. Chilla Dow said, ‘It was the only dance around on a Sunday night and it was referred to the 421 Club. We took that name and changed it a bit to get the 721 Club. Once they had the name they had to mark their spot. Chilla said that he and George Coote then painted the number 721 on the facia board above the pavilion in a very crude fashion. Chilla went on to recount the occasion of his brother’s ‘buck’s night’. It was held at Stanton’s Pub, it was closing time but guests wanted to keep talking and drinking. The solution was Club 721. One of the guests was worried that he didn’t have a tie. Chilla explained it wouldn’t matter. When they arrived in the car park on the beach the guest expressed surprise that there were no lights. Chilla again reassured him that everything was alright, lights were not needed. After all the club was not exclusive!

For years the number remained but gradually the numerals faded and the boards on which they were painted deteriorated in the salt air so it was replaced with a smaller sign and one done with a little more care. This sign remained for many years. Even when council decided to refurbish the building the council officers always painted around the ‘historic’ number. 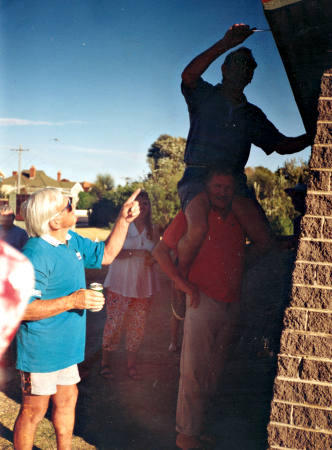 The club continued to operate for many years. Chilla Dow maintains its demise came about because of a raid by licensing police who were responding to a ‘dobber’. Plugger Droop as the treasurer of the Mordialloc Football Club was always interested boosting the club’s coffers. A single gentleman, he was a boot maker by trade. He had made himself a leather bag which was placed on the table at the shed to receive the money contributed by members who helped themselves to a beer. When the licensing policed arrived they were unable to establish if beer was being sold. As a consequence they went away empty handed but issued a strong warning about possible future action. As a consequence the ‘club’ moved to the home of Ted McGauran in Bay Street, Mordialloc.

In 1977 the shelter shed, the original site of the 721 club, was refurbished with funds from the Mordialloc Carnival Committee and named The Reg Nicholson Pavilion. Reginald Richard Nicholson who served on the carnival committee for many years, was an estate agent in Main Street, Mordialloc, and as a local resident contributed in a variety of ways to the growth and enhancement of Mordialloc’s facilities. To honour his contribution the pavilion was named after him but the sign of the club remained on the shed.

That was until the end of 2009 when the Kingston Council in its drive to improve the facilities in the municipality, refreshed the rundown Pavilion and its surroundings. Barbeque facilities were improved and the pavilion was repainted for the benefit of families who were visiting the beach. For the individuals doing the work, faded numerals had no significance, so they painted over what they saw as graffiti. It was this action that raised the ire of some local people.

When the matter was raised with Tony Rijs, a former City Engineer in the City of Mordialloc and currently General Manager, Environmental Sustainability, it was discovered that many council employees were unaware of the significance of the 721 amateur paint job. Cr Bill Templeton, a former Mayor of Mordialloc, resident chemist and member of the State Parliament was also ignorant of its significance. When speaking at a council meeting, back in the 70s, he revealed his belief that the 721 was part of the address of a house on Beach Road, Mordialloc. While even today the story behind the numeral 721 is not widely known and despite the fact that the club has long since ceased to met and many of its members are no longer with us, it is still an interesting part of Mordialloc’s history. It reveals a local initiative to raise funds to support a sporting club, while satisfying personal need for liquor at a time when legitimate sources were not available to them.