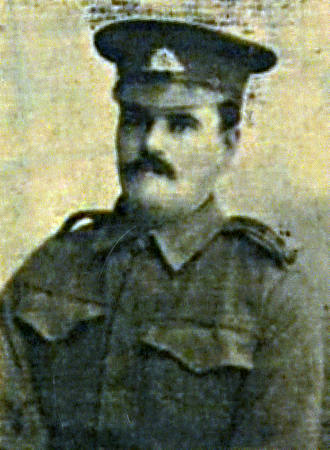 On 29 May 1915 Thorton Richard Wilde, the caretaker of the Cheltenham Hall, was writing to the Minister of Defence regarding malicious rumours circulating in the district about his son who had been serving with Australian forces at Gallipoli. [1] Mr Wilde asked the Minister if there was any way that the despicable individual who was creating mischief could be made to justify his statements. The rumour circulating was that George Victor Wilde, his sergeant stripes removed, had been sent home in disgrace to be imprisoned in the barracks at Queenscliff. [2] The truth, the father wrote, was that Sergeant Wilde had been slightly wounded at the Dardanelles. The reply from the Minister’s office was that it was regrettable that the Department could not suggest any means by which the person spreading the rumour could be dealt with except perhaps by recourse to civil action.

George Victor Wilde, born in Richmond, was a twenty-five year old single man employed as a motor mechanic when the First World War erupted in 1914. The assassination on 28 June of Archduke Franz Ferdinand of Austria was seen as the event that triggered the war but it was the invasion of Belgium and France by Germany on 4 August 1914 that saw the beginning of the military conflict. Within a fortnight of that date the 5th Battalion of the Australian Army was raised and it was on the 17 August 1914 that George Wilde enlisted at Ripponlea, making him a very early volunteer. He had some experience of military life having been a member of the 47th Infantry 3rd Division in the colonial forces holding the rank of sergeant. After a short training period at Broadmeadows he left with his fellow members of the Fifth Battalion, H Company, for Egypt on the HMAT Orvieto. They arrived in Egypt on 2 December 1914 and four months later took part in the ‘second wave’ landing at Gallipoli. Shortly after the landing, on 25 April 1915, he received a gunshot wound to the left shoulder and to the right of the back. [3] The wound was reported as not being life threatening but he was transferred at first to Mustapha and subsequently to the general hospital in Alexandria. A short time then followed in a convalescent home at Ras-al-tin, in Alexandria’s neighbourhood, before he was placed with Base Administration at Mudros on the island of Lemnos in August 1915. At the beginning of the next year he returned to his unit.

In August of 1916 he joined the Second Training Battalion in England. Then followed different assignments at military establishments in England. One was at Tidworth in south east Wiltshire on the eastern edge of Salisbury Plain. It was probably while there in the Overseas Training Brigade that he met Matilda Eleanor Key and married her on 2 June 1917 in Middlesex. At the time her address was given as 3 Cockerton, Warminster, Wiltshire. Ten months following his marriage George was back in France and fighting the Germans with his comrades in the 5th Battalion.

Returning to the question of rumour, it is not known what motivated the rumourmonger back in Cheltenham. Each rumour often has a ‘smidgin of truth’ which makes it more believable but the truth is wrapped in a lie or a series of lies. It was true that George wore the three stripes of a sergeant and they had been taken away but he had not been sent back to Melbourne. Why this demotion occurred is not recorded in his army records but on 22 December 1914 only twenty days after his arrival in Egypt he was classified as a private and transferred to a new company in the Fifth Battalion. On 15 January 1917 he was restored to the rank of sergeant (temporary) while a member of Headquarters AIF in England. At the time of his wedding in June 1917 his rank was given as sergeant but on 16 March 1918 he once more reverted to the rank of private. Again there is no comment in his record of why this occurred. A few weeks later he rejoined his unit in France where he fought to halt the German offensive at Hazebrouck. On the 14 June 1918 Private George Victor Wilde was dead.

The circumstances surrounding his death were reported by several members of the 5th Battalion. He was a member of a fatigue party carrying ammunition to the front line. It was about midnight when the Germans commenced shelling. A high velocity shell exploded near him, instantly killing him and a companion. One witness said a leg had been blown off and he was badly knocked about. Another soldier confirmed the damaged state of the body. The stretcher bearers removed the body the next day and he was buried in La Kreule British Military Cemetery between Hazebrouck and Borre. Several soldiers reported seeing the grave over which a cross had been erected showing his name, number and unit. [4]

His death was reported in the Moorabbin News, 14 September 1918. Later his name was included in the Roll of Honour placed in the church of St Matthew’s Cheltenham along with nine others who gave their lives, and forty nine others who served in the 1914-1918 conflict. His name is also recorded on the broken granite column in the memorial park behind the RSL building in Centre Dandenong Road, Cheltenham. 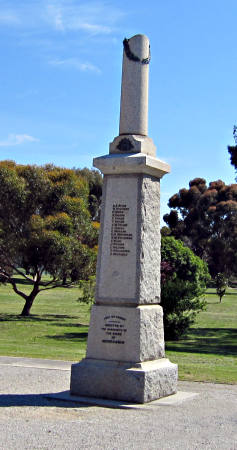 Memorial to soldiers who lost their lives in the World War One conflict, Centre Dandenong Road, Cheltenham
Courtesy Kingston Collection.