On his gravestone are inscribed the words ‘The Last of the Brighton Pioneers’. John Booker arrived in Melbourne in 1842, moving to Brighton in the employ of Henry Dendy. Several years later he took up a property in Highett. It was there that he died on 9 December 1906 and was buried in the Cheltenham Pioneer Cemetery after a short farewell service at St Matthew’s Church in Cheltenham. [1] 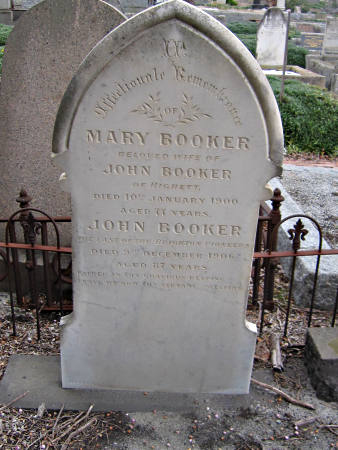 Gravestone of John Booker and his wife at the Cheltenham Pioneer Cemetery, 2010.

John Booker, born in Surrey (England) on 21 October 1819, was later employed as a servant in Capel by Henry Dendy’s brother- in-law, Richard Weller. [2] In 1842 on the 12 February he travelled with Mary (Lawrence) his young bride of a little more than two months in the Earl of Durham to Melbourne. [3] At the time John was 22 years old and Mary was 19. Both could read and write and their religion was noted as Protestant in the shipping records. On arrival in Melbourne on 10 June 1842 they were the first of a group of new arrivals to leave the ship, spending the initial night in the Port Phillip District in a hotel. The next day they walked along the bullock track to Brighton and the home of Henry Dendy. A few years later the wife of the Bishop of Melbourne, Francis Perry, wrote of her journey to Brighton by coach along that ‘road’:

‘The drive to Brighton is just like the drive anywhere else, along a deep sandy road, full of tree stumps and the surrounding country pretty thickly strewn with gum trees, and wattle or mimosa, some dead, some half-dead, some in full vigour, some standing upright, some prostrate, some leaning in grotesque attitudes . ... Such roads you never did see – there is no road to any place but several running in all manner of circumbendibuses amongst the trees, just so as to avoid this stop or that rut.’ [4]

After the commencement of their journey John and Mary met Mrs W Tucker of East Brighton who was walking to Melbourne to sell eggs and butter. She gave them directions to Dendy’s house, where after their arrival they remained for some time. [5]

Henry Dendy used his inheritance, his wife’s dowry and money borrowed from friends to purchase 5120 acres of land at a fixed price of £1 per acre in the new colony of Port Phillip District. This was arranged with the Commissioners of Lands, in London. For each £20 spent the purchaser was entitled to nominate an adult of the ‘labouring class’ for a free passage to the colony. Regulations defined ‘labouring class’ as individuals belonging to the Class of Mechanics, and Handicraftsmen, Agricultural Labourers, or useful Domestic Servants.’ Preference was given to married men and their families. Single women without their parents were admissible if they were under the immediate care of married relatives or attached to cabin passengers on the same ship. The most useful women were seen to be domestic servants, along with ‘sempstresses, and women accustomed to farm or dairy work.’ Single men were not to exceed the number of single women. [6]

These free passages were financed by the government from the sale of the land. Dendy used these free places on two occasions to gain members of the ‘labourers class’ who could assist him implement his vision of an agricultural community. John Booker and his wife Mary were in the first contingent. While as emigrants they were given a free passage to Port Phillip District, there were other costs that they had to meet. They had to pay their own way to the port of demarcation and while some things were supplied, such as mattresses, and bolsters, and cooking utensils, other things they had to provide for themselves. This included knives and forks, tin or pewter plates, spoons and drinking mugs. Provision of appropriate and sufficient quantities of clothing was also necessary. Regulations pointed out that the duration of the voyage to New South Wales was approximately four months and during that time they would experience extremes of weather for which they should be prepared. Food supplies for the voyage also had to be provided. [7]

Traditionally, the parishes of Britain were responsible for caring for the poor and destitute individuals living in their locality. A strategy adopted by some parishes in the 1840s was to provide financial assistance to those of their number who were prepared to ‘try their luck’ in the colonies. John Booker sought financial assistance to enable him to procure the required items and stores. This he did through his employer Richard Weller who applied to the parish of which Booker was formerly a member. The minutes of the vestry record the application and the outcome. [8]

A Public Vestry held at the Sussex Oak Inn on Monday the 17th January 1842 to take into consideration an application from John Booker belonging to Warnham Parish and a labourer residing at Capel (through Mr Weller of Capel) to advance him three pounds to fit him out for the voyage to Australia as Mr Weller have an opportunity of getting him a free passage over and he is anxious to go if the Parish will allow him the amount stated. The Vestry do agree and consent to give him the sum stated to be placed in the hands of Mr Weller for him as the application is made through him.

By the time of the arrival of the first contingent Henry Dendy was already in financial difficulty. He was not able to provide employment or accommodation for most of the emigrants sent to him by his agents in England. His vision of an agricultural community was in tatters. By December 1844 Dendy was insolvent. He went to Geelong, along with John Booker as his handyman, to conduct a brewery in an effort to retrieve at least part of his fortune. Back in England he had inherited a brewery which he sold to help finance his land purchase in the Port Phillip District but the Geelong venture was not a success. After ten months he was back in Brighton arranging the sale of property that was in his wife’s name. With the income from the sale in May 1849, together with the money derived from the sale of the brewery, he purchased a sheep station at Christmas Hill. John Booker carted Dendy’s belongings to his new property which he described as ‘scrub country quite unfit for sheep.’ 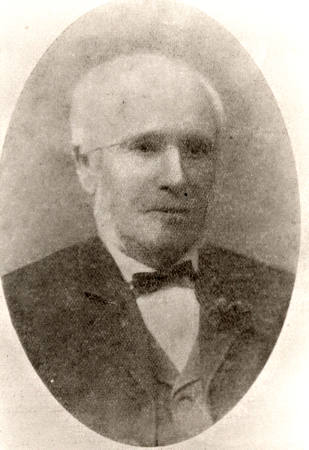 John Booker purchased Lot 49 in Outer Crescent, Brighton, from Dendy paying in instalments deducted from his wages. [9] There he engaged in gardening until 1851 when he joined the Victorian gold rush with Mark Lindsay and his son at the ‘Fiery Creek’ diggings. Returns were at best modest. They were away for thirty days out of which four were spent going and coming and they each averaged £1 a day in finds. Booker claimed he would have done as well if he had remained in Brighton collecting firewood and selling it in Melbourne as firewood realised thirty shillings to £2 a load and he could easily take in three loads a week. [10]

From 1852 he was employed at St Andrew’s Church of England in Brighton, taking a number of roles including caretaker, verger, clerk and sexton. It was in that same year that he purchased nine and a half acres in Highett Road, Highett, and commenced dividing his time between Brighton and Highett. When, in 1866, he resigned from St Andrew’s he was presented with a Bible which was inscribed with the note:

`‘Presented by the Incumbent, Church Wardens and Committee of St Andrew’s Church, Brighton, to John Booker, on the occasion of his resignation of the office of Clerk in the above church, after a term of 14 years, as an expression of their approval of his character as a Christian man, and of the manner in which he discharged the duties of his situation for so long a period.’ It was signed by the vicar of St Andrew’s, the Rev Samuel Taylor. [11] 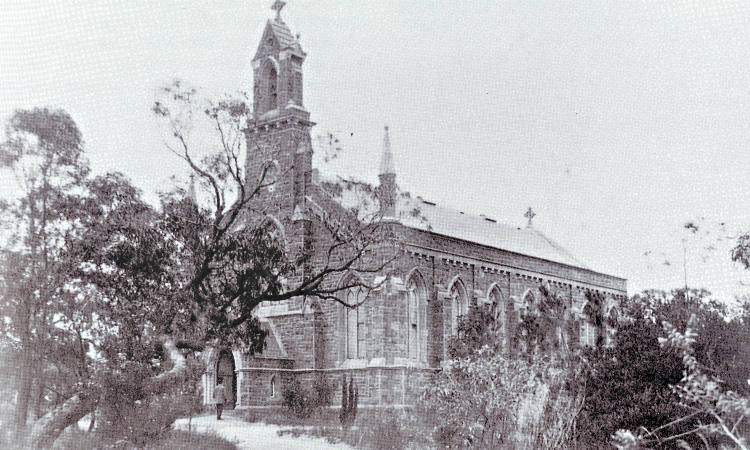 John Booker’s resignation from St Andrew’s was not the end of his association with the Church of England. He became actively involved with the new parish of St Matthew’s, Cheltenham which had been excised from the geographically extensive parish of St Andrew’s. He was a member of the Cheltenham parish during the tenure of four different vicars; Singleton, Plow Kane, Caffin and Moorhouse. During that time he joined with other early pioneers of Cheltenham to establish the local church. This group included Attenborough, Plumridge, Munday, Wells, McKnight, Smith, Comport, Tilley, Beazley and King. The minute book of the church first records his name as a member of the committee in June 1868, but he was a member of the committee before the church was licensed or consecrated. [12] Minutes note his attendance at meetings in 1870, 1875 and 1877. The issues he was obliged to consider with his fellow members included the mundane, like the need for a new broom or lamps for the vestry table and porch, to the more important issues surrounding the minister’s stipend. During these membership years he was a regular attendee, moving and seconding motions concerned with the operation of the church and sometimes taking the position of chairman. [13] In 1877 he along with all other members of the committee resigned on the 5th of July in protest because of the appointment by the bishop of the Rev Henry Plow Kane as their second vicar. The specific reason for the resignations is not revealed in the minutes of the relevant meeting. However, his loyalty to the church was beyond question. At the time of his death the congregation was reminded that he would walk two miles to church each fine Sunday morning to take his place even though he was over eighty years of age. [14]

In addition to his role on the committee John Booker was for many years the Superintendent of the Sunday School, first established by the Rev Henry Plow Kane.[15] Besides his role in the Sunday School at Cheltenham, he took the same responsibility at St John’s East Brighton which was part of the parochial district of Cheltenham at that time.

John Booker and his wife Mary were married for fifty eight years at the time of her death in January 1900. Together they had nine children, six sons and three daughters, all of whom were born in Brighton. John the eldest son died in 1877 when thirty three years of age. William and George, the next two sons, left Victoria, one going to New Zealand and one to Western Australia. James, the fifth son, only lived for four months after his birth. The other two sons, Henry and Charles Edward, remained in the Cheltenham district and like their father were market gardeners who had a close association with the Church of England. Henry served as a committee member of St Matthew’s Cheltenham for several years before taking a similar role with Christ Church Dingley. Charles Edward, like his father, was the Superintendent of the Sunday School at St Matthew’s, a role he had for twenty seven years. He was also a member of the vestry and later a church warden nominated by the vicar.

John Booker died on 9 December 1906 and was buried with his wife in the Cheltenham Pioneer Cemetery. While he never became a shire councillor or entered into public life, other than his work for the church, he was well thought of in the community. At his funeral four prominent local men, A Judd, T LePage, H Wells, and B Biehl. carried his coffin. [16] A short time later, on the 18 December, W P Fairlam of Cheltenham auctioned household furniture and sundries from the property of J Booker between the Highett station and Point Nepean Road. [17] 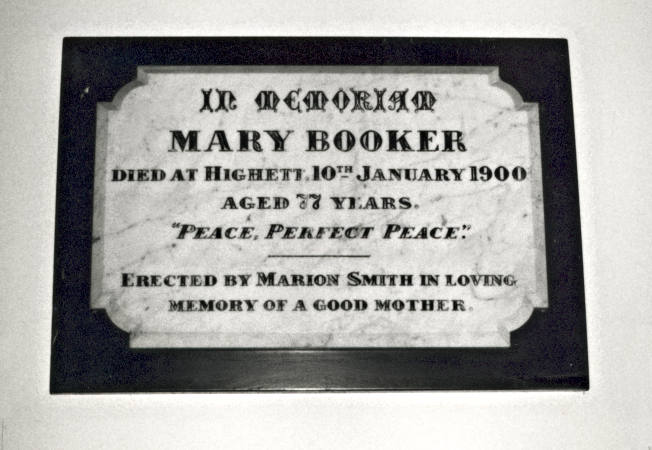