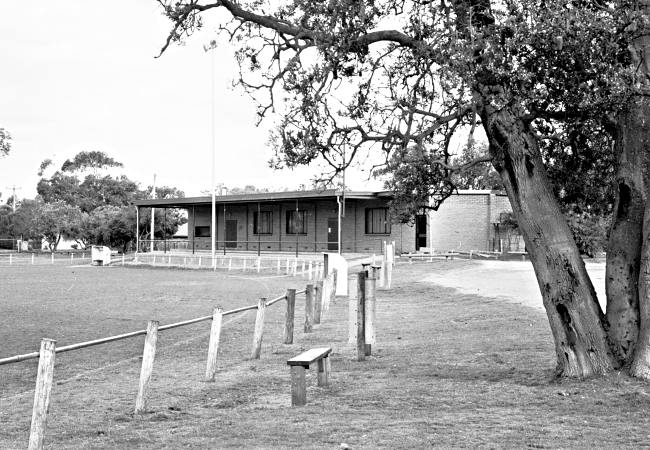 In October 1922, at a footballers’ smoke night, Mr Hannon drew attention to the urgent need for a recreation reserve in Edithvale. Cr Richardson, agreeing that recreation reserves were necessary in any community, pointed out that the Council would want assurances that this was a strong desire by a large number of the community before action was taken. To meet this requirement he suggested that a petition be organised. [1] This was done. A petition was presented to Council signed by 135 individuals asking that Council approach Hugh Brown with the intention of purchasing ten acres of his land immediately east of the Regents Park Estate. [2] Hugh Brown was amenable to the request suggesting the price of £200 per acre. By June of 1923 the loan procedures and the legal consent requirements were completed and on October of that year the reserve was named the Regents Reserve. [3] Hugh Brown was praised by councillors for his public-spirited action as he had to upset some private arrangements to oblige the Council. [4] Some years earlier, in 1913, an advertisement from Wilton, an estate agent, announced that surveyors were at work subdividing the property into 146 allotments with prices ranging upwards from £70 per lot. [5] An advertisement in 1915 advised that blocks on the estate were being purchased by some of the ‘best businessmen in Melbourne’. [6]

In order to pay for the new reserve the Council proposed striking a special rate of halfpenny in the pound on all rate payers between Berry Avenue and Lochiel Avenue. This arrangement was not well received by the Edithvale Progress Association who wanted the cost of purchasing the land to be equally shared by all ratepayers whom they saw as benefiting from the new asset. They wanted the boundary for the special rate extended towards Aspendale including the racecourse. Councillors debated the issue during which time it was resolved to increase the rated area to include the area up to the south side of Groves Street and the area formed from a direct line through the Aspendale Racecourse from that point. The expectation was that the loan would be repaid over ten years. [7]

In October 1923 the mayor, Cr Richardson, called for a meeting at the Boat Club Hall of Aspendale and Edithvale residents who were interested in forming a committee to manage the new reserve. There it was agreed to have a fifteen-member committee made up of delegates from the Progress Association, Edithvale and Aspendale Fire Brigades, the Boat Club and Life-Saving clubs, the Football Clubs, including representatives from both the senior and junior members, the Cricket Club and the Aspendale and Edithvale Tennis Clubs. In addition, the three councillors from the North Ward were to be members. It was also at that this meeting that the name ‘Regents Reserve’, gained unanimous support. [8]

The official opening of the reserve took place with a variety of programs on 12 April 1924. The main event in the minds of many was the football match between the Aspendale and Edithvale clubs but there was a fire brigade demonstration, a fancy dress football match, a cricket competition, as well as refreshments and free lollies for the children. Cr Richardson performed the formal part of the afternoon and in his speech spoke of the hard work that lay ahead in order to overcome difficulties. He commented on the new loan being raised through the issue of debentures and urged all to take up this financial opportunity. The money, he pointed out, was required to pay for the fencing of the reserve, building a grandstand and making other improvements. [9] 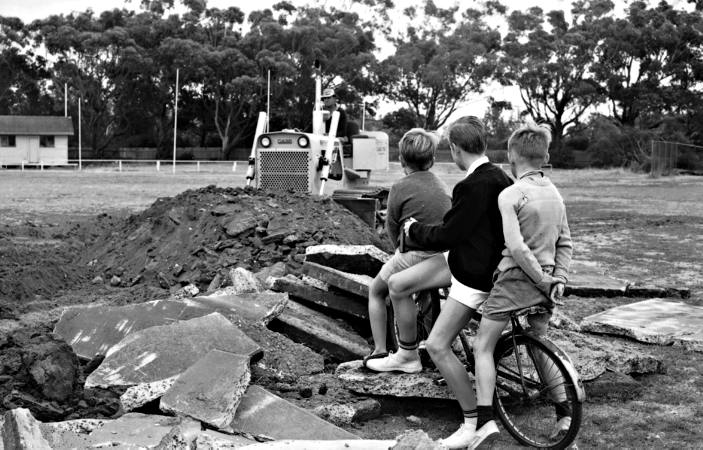 Conditions on the day of the official opening were not favourable for a good football match. There was a strong wind blowing towards the southern goal and the heavy sandy nature of the ground made for problems. The wind was so strong that the northern section of the ground was not reached once during the game. There were also difficulties in convincing anyone to act as umpire in a match in which there were expected to be ‘no beg your pardons’. Finally Mr Mudge, the representative of the Moorabbin News, was convinced to take the whistle. Aspendale was the winner of the encounter scoring 3 goals 4 points to Edithvale’s 2 goals 5 points. [10] It was agreed, however, that while the ground was not fit at that time for football it would be a splendid ground once the sand consolidated and was bound with the grass. No team, it was suggested, could produce its best football with the current conditions of the ground. [11]

After the official opening of the reserve and the appointment of a management committee the difficulty of finding money to make the necessary improvements to the ground continued to be a running sore. People were critical of the surface of the ground and the lack of fencing, while others believed the boundaries set for the levying of the special rate were too restricted. A large deputation of ratepayers waited on the Council and voiced their concerns. They wanted to secure an extension of the rating area from the park to the north end of North Ward and thus include all of Aspendale. Considerable expenditure had to be faced, requiring the borrowing of money, and therefore it was not fair that those living beyond the rated area should have all the benefits of the recreation reserve without contributing to the cost. ‘The cost burden should be spread’ was the cry. [12] Still others saw the time as being appropriate to create a new ward in the municipality; a fourth ward that would centre on Aspendale. The new ward would then have to acquire its own recreation reserve rather than making financial contributions to a reserve in Edithvale. But the issue of boundaries still remained a point of argument.

The intention of the Regents Park Advisory Committee, through the Council, was to issue debentures to a total value of £1000 to pay for the necessary improvements to the reserve. [13] The money gained in this way was to be used to fence the reserve and to build a grandstand. Unfortunately, despite the interest rate of 7% per annum, the take up of the debentures was slow. In 1924 the football club’s successful Queen Carnival raised £273 and of this sum A Rowse proposed £100 be allocated to the purchase of Regents Park debentures. Cr Gollan saw it as a wise investment by the Edithvale Football Club but others spoke against the proposal. At the general meeting of the club Mr H Plain recommended the money be banked for the future use of the club. It had been raised through the hard work of club members and should be entirely for the club’s benefit, he claimed. His view that Regents Park should look after itself was supported by other people present. Mr Goold suggested the money should be used to give the players a trip to Queensland. [14]

It was at a later meeting of the Edithvale Football Club, in 1926, that a member of the reserve’s advisory board voiced his dissatisfaction with Council’s lack of assistance with ground improvements. He suggested that unless the situation changed the whole board would have to resign. [15] Following this newspaper report a deputation from the Advisory Board was received by the Carrum Borough Council. During its presentation the points were made that a fence around the playing arena was an absolute necessity and filling was essential to make the ground level. An outer fence round the reserve was also required to facilitate the collection of admission charges which would assist in making the reserve a paying proposition. [16] 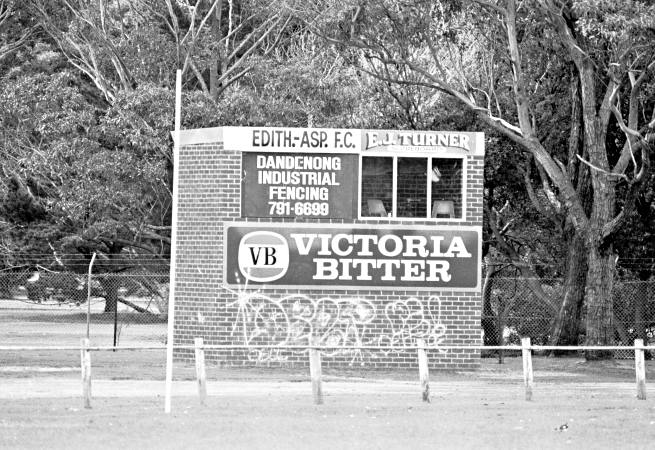 The Councillors were not in agreement. Some were prepared to support advancing money for improvements while others were not. In 1924 it had been estimated that it would cost £500 to top dress the reserve but money was not available. [17] Four years later there was general agreement that the reserve was not suitable for sport but little action was taken to improve the situation. The Edithvale Cricket Club requested 20 loads of top soil and 2 loads of marlstone, which they were willing to spread, following up the 20 loads of soil delivered the previous year. [18] This request was forwarded to the parks and gardens committee which had power to act.

Over the years changes and improvements to Regents Park were made but the relationship between Council and tenants was not always easy. Tennis courts were added to the reserve after a proposal was submitted in December 1929 [19] A pavilion was built in 1951 [20] and the following year the council acted promptly to repair the ground because of a fear that players might injure themselves. [21] In that same year the club rooms were subject to damage from intruders who smashed a property cupboard stealing its content. They also scattered orange peel and defecated on the floor and seats. [22] There was an occasion in 1980 when the Council required the Edithvale/Aspendale Football Club to meet its loan commitments or vacate the building within one month. [23] A threat that was not implemented. The management committee of the reserve had been disbanded and in 1982 the Chelsea Council resolved not to pursue the outstanding £4196 recorded in the accounts. 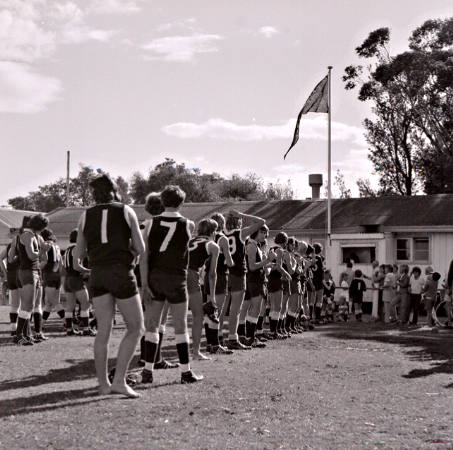 Today the Regents Park is the responsibility of the City of Kingston and in the winter season is the home of the senior and junior sections of the Edithvale/Aspendale Football Club and during the summer the Aspendale Cricket Club. The cricket club plays on a turf wicket prepared at the beginning of the season by the Parks Department staff. Two years ago the Council converted the oval to warm season grasses and it forms part of the Council’s portable water allocation thus reducing the impact of drought conditions in the hot months of the year. The Aspendale Tennis Club leases the tennis courts and the 1st Edithvale Scout Troop has the scout clubrooms. More recently the Jack Cuthbertson Memorial Garden was formed and continues to receive the ongoing care of the Parks Department staff. 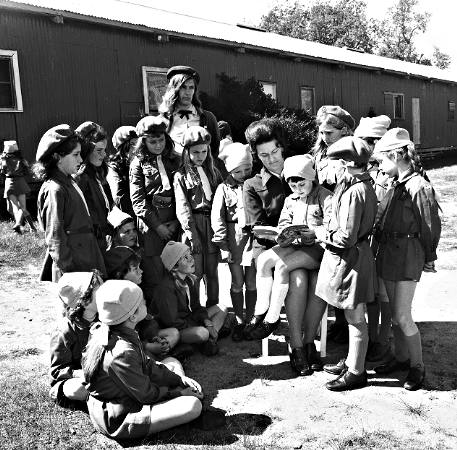