The Howard’s of Chelsea 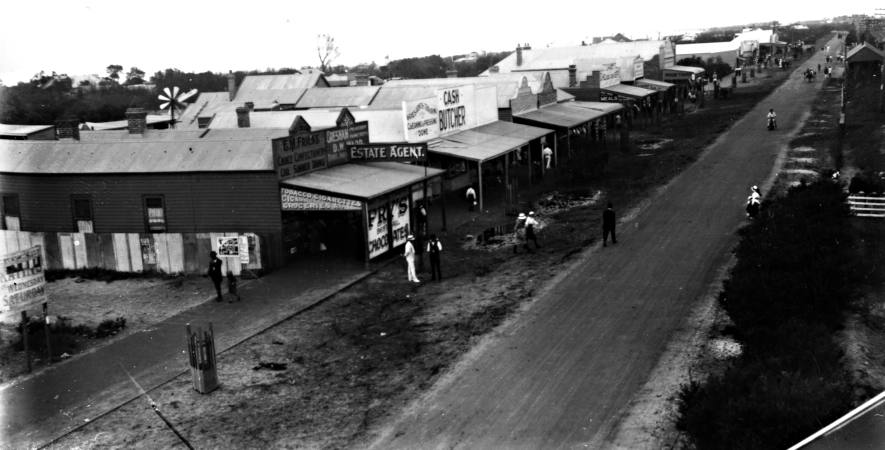 On the 14 October 1916 Elizabeth Maria Howard was writing to the Defence Department requesting that her son, Private Victor Edward Howard, be permitted to return home from the conflict in Europe. He was serving with the 1st Australian General Hospital in England. She pointed out that he was the only man left in her family as her husband had died four months previously in the Base Hospital in Melbourne and her younger son, Lieutenant Hubert Charles, was reported wounded and missing three months earlier. After confirming the facts contained in Mrs Howard’s letter the Department of Defence approved Victor’s discharge for ‘family reasons’ and he returned to Australia on the Ulysses in April 1917.

Elizabeth Marie Jones and Edward John Buller Whiffin Howard had married at the Free Church of England at Moor Street Fitzroy on 15 December 1888. Edward was a twenty nine years old seaman. Together they had three sons, Victor Edward (1891), Hubert Charles (1893) and Sydney Arthur (1899). Sydney died as a young child. Victor was born at Abbotsford while his younger brother’s birth place was at Coal Mines, Korumburra. There were four daughters: Lilian Isabel (1891) Mabel Alice Eleanor (1895), Edith Beatrice (1896), Dorothy Annie (1901) and Beatrice Letitia (1903). Their father, fifty six at the time of his death, was serving as a sergeant on the Recruiting Staff of the Australian Army. He died at the No 5 Australian General Hospital on the 28 June 1916 after being admitted seven days earlier suffering from pernicious anaemia. [1] [2] Earlier when the family were living in Chelsea he was actively engaged in community affairs being involved both with the Chelsea Progress Association and the Chelsea Fire Brigade.

The local fire brigade at Mordialloc was called to attend to a fire at a house in Swansea Road, Chelsea, early in 1911. On reaching Aspendale the firemen on the horse drawn hose cart were informed that the house was almost destroyed and no water was available beyond Aspendale. Sensing the hopelessness of the situation the unit returned to Mordialloc. Because of this outcome the Chelsea Progress Association decided to form a committee to report on issues surrounding the formation of their own brigade. Edward John Howard was secretary of this four-man committee. Their report to a public meeting and advertisements in a local newspaper ultimately lead to the formation of a local brigade of which Edward Coward became Honorary Secretary. At the time of calling for volunteers to join the movement for a brigade Howard gave his address as 64 Embankment Grove, Chelsea. [3] 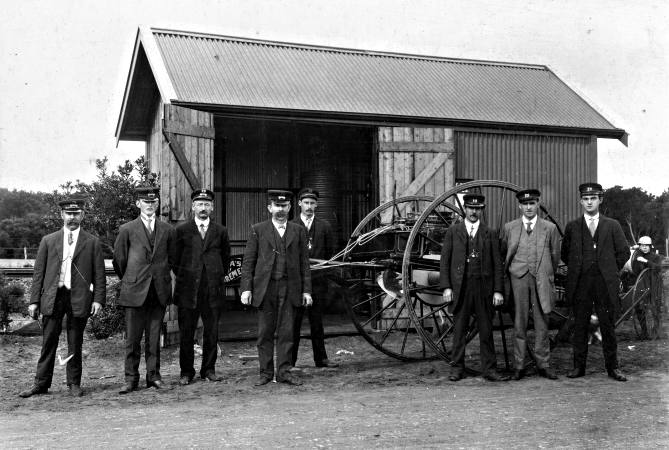 Two of Edward’s sons, Victor and Hubert, had served in the 5th Australian Infantry Regiment when war was declared in 1914. Victor was credited with three years service while his younger brother had been a member of the regiment for eighteen months. (Australia had adopted compulsory military service for its citizen army in 1909 ) Six days after the declaration of war with Germany, Hubert volunteered to join the Australian Naval and Military Expeditionary Force charged with seizing and destroying German wireless stations in German New Guinea. The British government had asked the Australian government to provide a force to destroy these German wireless installations at Yap in the Caroline Islands, Nauru and Rabaul because they were providing communication links to a Germany naval force which threatened merchant shipping in the region. [4] The force created consisted of six companies of the Royal Australian Naval Reserve, a battalion of infantry, two machine gun sections, a signalling section and a detachment of the Australian Army Medical Corps. [5] Hubert, as a member of the infantry battalion took the oath to serve his “Sovereign Lord the King in the Australian Naval and Military Expedition for a period not exceeding six months’ in Sydney on the 17 August 1914. He joined a group described as ‘…those who, drifting without moorings in the ebb and flow of city life, clutched at this chance of a new career; some were lured by a spirit of sheer adventure; others, putting material interests and family ties behind, answered simply to the call of duty.’ [6] The expedition left Sydney on the Berrima on 18 August 1914.

On the 4 March 1915 Hubert Howard was discharged from the army as his ‘time had expired’ only to re-enlist a little over a month later as a twenty three and a half year old former cinema photographer ‘to serve within or beyond the limits of the Commonwealth.’ He completed an officer training course at Broadmeadows and made an application for a commission in the Australian Imperial Forces on 22 June 1915. In that application it was recorded that he was Single and had completed the Senior Public Exams under Private Tuition. For his primary school education he had attended Nott Street, State School at Port Melbourne. At the time of this application he listed his mother, Elizabeth Howard of Embankment Grove, Chelsea as next of kin. He was appointed a Second Lieutenant on 12 July 1915 and transferred to the 59th Battalion. Almost a year later while in Egypt, and shortly before the Battalion’s departure for France, [1/6/16] he was promoted to the rank of Lieutenant in the 5th Division.

While in Egypt at Ferry Post, Ismailia, he suffered from Diarrhoea and was confined to hospital for a week before being able to rejoin his unit. A little more than a year later he sailed from Alexandria on the Kinfauns Castle to disembark at Marseilles on 29 June 1916 to join the British Expeditionary Force. This was a time when the Battle of the Somme was underway and events were going badly for the British. The 5th Division almost immediately joined in the conflict and were the first of the Australian Divisions to see major action in the Battle of Fromelles. This battle was responsible for a massive loss of Australian lives. The Division was effectively incapacitated for many months afterwards. Hubert Howard was one of the casualties in his battalion where eight officers were killed or died of wounds and eleven were wounded . [7] At first he was declared wounded then missing in action on 19 July 1916 but subsequently this was changed to ‘killed in action’ and struck off the strength of the 59th Battalion.. His burial was registered as being in the New Irish Farm Cemetery at St Jean-Les-Ypres, Belgium. The cemetery was named after a nearby farmhouse.

Mrs Howard was persistent in requesting information about her son. A communication from Victoria Barracks, Melbourne on 30 July 1916 told her that her son was reported wounded. She was informed by letter dated 27 November 1917 that her son was dead. This conclusion was reached by a Court of Enquiry, held in the Field, in July 1917. Earlier it had been reported that Hubert was wounded in the hand as soon as he went over the parapet. Given this information Mrs Howard thought that her son might have been in the Southall Hospital about nine miles from London suffering from loss of memory. [8] This proved not to be the case.

Lieutenant Howard’s belongings were returned to his mother. She was the beneficiary named in Hubert Howard’s will made while he was in Egypt. A valise was forwarded to Elizabeth Maria Howard containing:

Later in response to further correspondence from Mrs Howard, a leather trunk belonging to her son while he was in Egypt was forwarded to her from London. It contained similar items to those found in the valise. Besides various pieces of military uniform and underclothing there was a fly switch, field glasses and visiting cards along with a large camera made by O Simon, Dresden contained in a Brown Case. Given Hubert’s earlier occupation as a photographer one wonders what happened to the many photographs he took while serving overseas.

Victor Edward Howard, Hubert’s older brother volunteered for military service on 9 April 1915, five days before Hubert rejoined the army after service in the German colonies in the South Pacific. Victor was twenty five years seven months of age and a bricklayer by trade. He was single on joining the 1st Australian General Hospital. For a while he was stationed in Egypt where he spent some time as a patient in a hospital at Heliopolis with dental problems but in August 1916 he embarked from Alexandria for England on the transport Franconia. It was during this time in England that the army authorities responded to the request of his mother to allow him to return to Australia. Victor sailed from Plymouth on 13 February 1917 on the transport Ulysses where he undertook nursing duties. He was discharged from the army in April of that year.

Victor’s mother, Elizabeth Marie Howard, was granted a pension of £3 10s per fortnight from 13 November 1916 but her request for support for the two younger daughters was rejected. She was the beneficiary of Hubert’s will which he drew up while in Tel el Kebir, Egypt nominating his father as the executor. She was writing to the authorities 20/11/17 asking that they urgently sent her documentation attesting to Hubert’s death so that his estate could be settled quickly ‘for family reasons’.

While in 1912 she was living with her family in Embankment Grove in Chelsea she moved fairly frequently from one residence to another. In 1915 her residence was in Punt Road, South Yarra and two years later she was living in at the rear of a shop in Chapel Street. She returned to Chelsea for a time in 1917 before settling in several addresses in South Yarra. She also lived in Murray Street South Yarra in 1918 as well as Balmain Street, Richmond, Chandler Road, Malvern and Downshire Road, Elsternwick. Her moved from Elsternwick in 1918 was necessary because the house she was living in had been sold. In 1921 she was living in Summerhill Road, East Malvern. All these moves suggested that Elizabeth, possibly with her two younger daughters, was having financial difficulties and perhaps suffering from grief after the death of both her husband and soldier son. This was a situation shared by many mothers in the Australian community that lost more than 50,000 of their young men in the conflict known to some as the Great War. 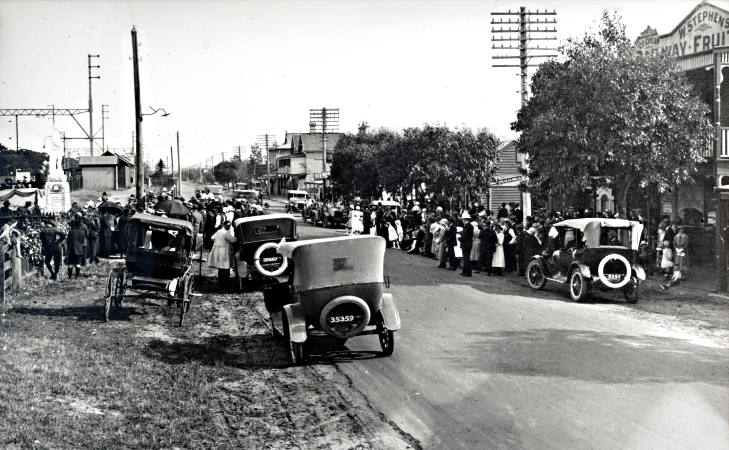