War Trophies and Memorial at Parkdale 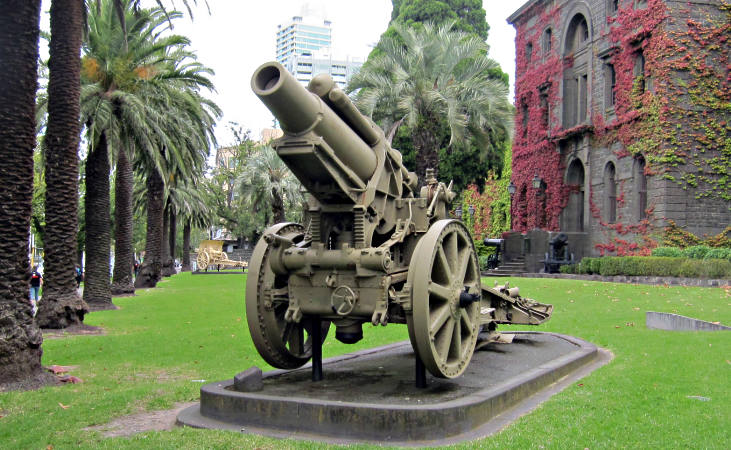 At the official conclusion of World War One in 1919 towns throughout Australia continued the earlier discussions on how they should honour and recognize the sacrifices and contributions of members of their community in the war. In addition, many communities debated whether they should apply for a trophy of war to be mounted in a public place to remind future generations about the ‘engines of destruction’ used in the slaughter of thousands of men, women and children. The small community at Parkdale was no exception.

In June 1919 a minister of the Australian government announced that the seven hundred captured guns and three thousand machine guns that had been transported back to Australia would be distributed around the country and not concentrated either in a war museum or in capital cities. At that time requests had been received from more than three hundred municipalities seeking a trophy. The government’s decision was that the great majority of the trophies were to be given to the home States of the military units who captured the weapons. [1] By March 1920 the Minister for Home and Territories announced that applications had been received from about one thousand localities and that four hundred and fifty guns, and trench mortars, and two thousand machine guns were available for immediate distribution. Towns with a population of more than 10,000 were to receive two guns and two machine guns, one gun was to be given to towns with a population between 3,000 and 10,000, while towns with a population of between 300 and 3,000 were to receive one machine gun. [2] The communities of Moorabbin, Heatherton and Aspendale were quick to respond to the government’s offer and were allocated machine guns in the first six months of 1921. [3] The Parkdale community was informed in October of that year that one machine gun, ‘light without tripod’, was to be delivered by train to Mr Cusick, care of Parkdale station. [4] Mr Francis Cusick together with Richard William Sones and Frederick Herbert, were named as the trustees appointed by the town to receive the trophy and to ensure certain conditions of the award were honoured. Firstly, a permanent location in a public park, or building within the town, had to be arranged where it was to be preserved and protected. Secondly, a simple ceremony had to mark the formal passing over of the weapon, and thirdly all costs connected with transport and installation after arrival at the nearest train station had to be met.

All of the trustees had strong personal and emotional connections to the war. Richard Sones, a Mentone resident, was the father of an eighteen-year-old son who served at Gallipoli and was wounded in France . Francis Cusick, as a volunteer aged 30, enlisted five months after the declaration of war. He joined the 5th battalion and saw action at Gallipoli. Later he transferred to the Camel Corp before being transported home suffering from paralysis and fever. Fred Herbert was also an early volunteer. Aged 30 years and married, he joined the 1st Field Artillery Brigade and fought in France. He returned home in December 1918, discharged from the army medically unfit having suffered from influenza and myalgia. [5]

Members of the Parkdale Progress Association, after a brief discussion about war trophies in August 1921, seemed to be on the point of rejecting the idea of a trophy for Parkdale. However, finally, it was resolved that the matter should be left in the hands of ex-soldiers of the district. [6] At a following public meeting former soldiers, together with some residents, decided to accept the war trophy and at the same time to inaugurate a movement for the erection of a memorial to those of their community who had sacrificed their lives in the war.[7]

Not all community members were in favour of the war trophy as letters in the press provide evidence of dissention among some individuals. One writer, ‘Dad’, expressed surprise at the reason given for not supporting the proposed memorial. He said the opponents to the trophy claimed its presence would inculcate a military spirit in the district and glorify war. In his view the memorial was to be a reminder of the sacrifices made ‘by our sons to prevent these men of Parkdale coming under the yoke of the most rigorous military rule the world has ever known.’ He thought the miserable ingratitude of these people was astounding. ‘Ex-service’ was much livelier in his condemnation of those who rejected the war trophy. He thought there were plenty of loyal subjects of the King willing to crew a gun with its muzzle well aimed at the Progress Hall, the home of the Parkdale Progress Association and centre of opposition to the trophy memorial. H Ealey of Mentone, a frequent letter writer to the News, who felt the Parkdale Progress Association was unfairly treated in the letters of ‘Dad’ and ‘Ex-service’ went on to berate them for their attitude. He preferred, he wrote, to appeal to his audience through reason and their humanity rather than trade on their ignorance and selfishness as did his fellow correspondents. He saw war resulting in death, debt and dear commodities. He wanted something more tangible ‘than a piece of steel in payment for these sacrifices’ from the German people who had promised so much in war reparation and had so very little to give. [8] A subsequent editorial in the Moorabbin News pointed out that war memorials were ‘a permanent demonstration of the gratitude of the people for the bravery of young men sacrificing themselves for the honour of their country and that memorials are intended as a shrines at which people could gather on occasions of national importance and also inculcate into the younger generation a love of country and a spirit of individual sacrifice for the community.’ [9]

The memorial, it was agreed, was to take the form of a drinking fountain. A request was made to the Mordialloc Council for a site on the foreshore between Parkers Road and Monaco Street on which the memorial together with the war trophy could be erected. A sub committee was elected to canvass for subscriptions to pay for the memorial which was expected to cost about £200. Mr McMinn was elected president of the appeal, along with Fred Cusick as treasurer and Fred Herbert as secretary. [10]

Over the name of Fred Herbert an advertisement was placed in the Moorabbin News calling for designs of a water fountain memorial which also made provision for the secure placement of the war trophy, an aeroplane gun. The names of the fallen soldiers were to be in raised lead letters together with a suitable inscription. The precise site of the memorial in the Beach Reserve was at that time still to be determined but when known the site and approaches would be cleared and graded by the Memorial Committee. [11]

With the announcement of the council granting a site on the foreshore, steps were immediately taken to raise the money necessary to finance the project. [12] Mr Reilly of the Mentone Race Course was approached to arrange a race meeting and he agreed but the government minister declined to give permission, saying it was impossible, given similar requests had been received from twenty six soldiers’ clubs and all had been refused. [13] Nevertheless, a motor bike race programme was arranged, to which the Governor of Victoria, the Earl of Stradbroke indicated his willingness to attend. [14] Other money-raising events were conducted. A picture night at Mentone raised £12 and a band recital by the Box Hill Band added to that sum. [15] By March 1923 the foundation had been laid but it was revealed that the money in hand was short of £40 to complete the task. While all monies owing had to be paid within three months after completion of the work, planning went ahead to unveil the monument on Anzac Day 1923. In July it was announced that an evening organized by the Ladies Social Committee had resulted in a profit of £22/3/9 wiping out the remaining debt of £20/16/-. [16].

Mr O R Snowball, the local member of the Legislative Assembly in the Victorian parliament unveiled the granite obelisk draped with the Australian flag and the Union Jack, inscribed with the names of five men who paid the supreme sacrifice; E Gladstone, H C Jones, J W Morse, C A Sanders and W C Wigg. [17] On enlistment two were eighteen years old and the eldest was twenty five and married. In addressing those present O R Snowball reminded all that the community should not only remember the dead but also their responsibility to those who returned, many of whom were maimed and broken after four years of warfare. He urged all when looking at the monument to take fresh hold on life and its fundamentals.

The unveiled memorial did not include a war trophy. One light machine gun used in aerial combat had been delivered in October 1921 but it proved to be a disappointment to the Parkdale community. In April 1923 Fred Herbert was writing to the Secretary of the War Trophies Committee asking that their machine gun be exchanged for a field gun, but the Parkdale Memorial Committee did not gain satisfaction. The Parkdale committee was informed that the final distribution of all trophies in Victoria had been completed. Their request could not be acceded to. That reply did not satisfy the Parkdale group who then instructed their secretary. Fred Herbert, to write to the Prime Minister of Australia, Stanley Bruce, the member for Flinders, pointing out that the war trophy received was so small they were unable to place it in a suitable position on the memorial. Besides they had a splendid reserve where a field gun would ‘set the Memorial off.’ The private secretary of the Prime Minister wrote to the Secretary of the Defence Department asking that he look into the matter of the field gun. The Defence Department raised the matter with the Director of the Australian War Memorial in Melbourne asking for favourable consideration. In turn, the Director wrote to Fred Herbert, completing the circle of correspondence, advising him that all the captured guns had been distributed so it was impossible to comply with the Parkdale request. [18]

Parkdale did not get a field gun from the World War One battle fields of Europe to enhance their memorial. Some decades later, at a time when a Second World War memorial was constructed, blue stone wings and two plaques were added to the original granite column. One plaque had the message, ‘The City of Mordialloc Will Always Remember Its Fallen’ while the second informed the reader that the more recent memorial was unveiled by His Excellency Major General Sir Rohan Delacombe the Governor of Victoria on 10 November 1968. 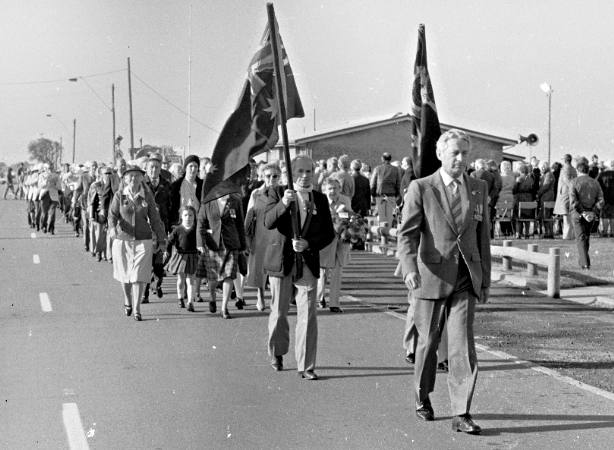