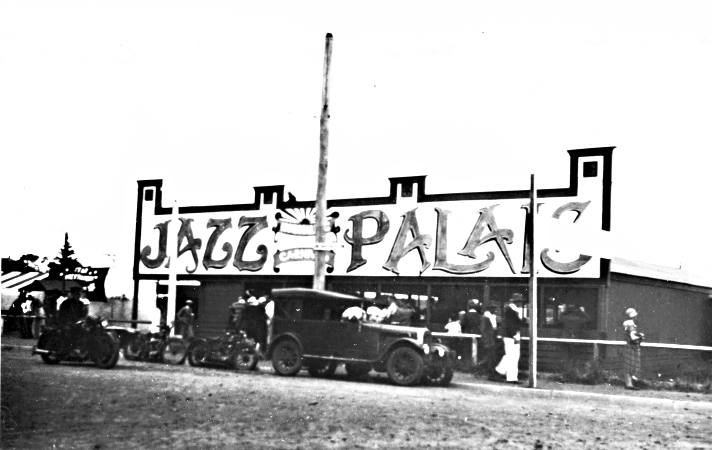 When Australia entered World War 2 in 1939 Mordialloc Carnival was an annual event enjoying its peak of popularity. The Federal Government wisely allowed a lot of sporting events and other amusements to continue despite the total war effort. Civilian morale had to be maintained. Mordialloc Carnival was a morale booster and also a fund-raiser for the war effort. It expanded during the war. In 1941 Scoota Boats became an attraction when a new building next to the Jazz Palais allowed small motor boats to be hired and driven around the water-filled arena, providing an aquatic version of the Dodgem Cars, where customers’ boats rammed each other in friendly rivalry. The first year or two of the war did not change the carnival much, but when the Japanese forces threatened Australia, starting with the Darwin raids in1942, the changes came. There was no opening ceremony and costs were cut on advertising, among other austerities. The biggest change was the allocation of funds to the war effort. In 1941 two ambulances, bought with 1000 pounds of carnival profits, were donated to the military forces. Large amounts of money, measured in thousands of pounds, went to the Red Cross, Comfort Funds for service personnel, Air Raid Precautions operations, support for wounded soldiers, sailors and airmen, the Blinded Servicemen’s Assistance Fund, and War Loans raised by government. The committee supplied timber duckboards for use in trenches in 1943. In 1942 the carnival grounds had a large air raid shelter dug near the side-shows. It would have been impossible for it to protect all the people who crowded the place on holidays. Thankfully it was never used and it was filled in at the end of 1943 when a future air raid became very unlikely. Mordialloc Carnival prospered during the war years, providing some light relief from the grim news that often came from the battlefronts and covered the newspaper pages. Many men in uniform attended. They were given free admission to the Palais, and other concessions. All the same they were aware that military police with their white webbing belts also attended the fair, looking for servicemen who were AWOL, or those misbehaving.

The generous contributions of volunteers continued during the war, with committee members always suggesting ways to boost the profits and help the war effort. Some men worked extremely hard. Edward Davis chaired the group for several years. There were others who came year after year, including J McLorinan, C Gillespie, E Preston, A Hill, J Snell, J Atkins, W Trengrove, R Brown, F Pain, W Conroy and P Walsh among many others. Mordialloc people saw the carnival as a key local method of supporting the all-important war effort, crucial at that time. Apart from funds donated to the cause of winning the war, the Carnival also gave financial help to the victims of the bushfires throughout Victoria in 1939 and those who suffered in local fires, mainly at Beaumaris, in 1944.

When peace returned in 1945 the Mordialloc Carnival had already been going for over two decades. Children at this time loved the annual enjoyment of the merry-go round and the rides on ‘whizzy whirls’, as well as the dodgems and the boats. In those days there were no similar attractions at fetes and other gatherings as there are today. Mordialloc Carnival was the biggest local opportunity for exciting fun. For many adults too the Jazz Palais, Jimmy Sharman’s boxing tent and the many side-show games offered a change from ordinary working days. The boxing was very popular with some men who enjoyed seeing hopeful young boxers get bruised by the tough fighters employed to belt their challengers and earn a quid. There was also the ‘Wall of Death’ where motor bikes were ridden in a circular arena until they were travelling almost upside down, held in place by centrifugal force. The Carnival produced characters too. One was Frank McEvoy, a colourful local bloke whose enthusiasm to collect money on gaming tables got him into trouble on a few occasions.

By the post-war years the Carnival’s distribution of funds had become an annual bonus for local institutions. Sporting clubs received help, at one stage money from the carnival being put to use in modernising the pavilion at Mordialloc’s McDonald Street oval, and, later, installing hot showers. The RSL and other clubs profited too, in some cases their members being allowed to run gaming sideshows in return for a percentage of the takings. By the 1940s it seems that most local organisations considered the Mordialloc Carnival as a likely source of funds when a genuine need could be established. For instance, the Mentone Amateur Athletics Club applied to the Carnival Committee for funds to buy hurdles for training purposes in 1947. They received a loan for this purpose. The life-saving club, the yacht club, the bowling club and primary schools all received grants. In 1946-7 donations were made to the ‘Food for Britain’ appeal in recognition of the need to help those in UK still deprived of basic needs after the war’s destructive effects. But the biggest cause in the later forties was the hospital. There had been a campaign since the 1930s to have a local public hospital built in the area between Cheltenham and Chelsea. This stepped up after the war and the Carnival Committee began to provide funding, in many hundreds of pounds, towards this community project. Much of the allocated funding was held in bank term deposits during the forties as the government was lobbied to build the hospital. Eventually the Mordialloc-Cheltenham Community Hospital opened in 1953, sited near the Nepean Highway in Parkdale. The Carnival Committee had contributed generously to its cost, with one of its contributions to the ‘opening day’ appeal amounting to one thousand pounds, adding to the several thousand already committed. The MCCH was closed in 1996, eventually becoming a centre for various health clinics. The Carnival Committee also donated substantial amounts to the Alfred Hospital during the 1950s and 1960s. 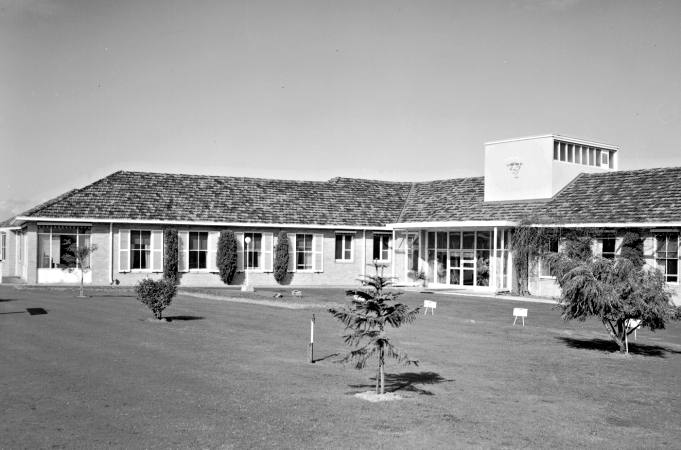 During this period a solid group of citizens stayed on the committee for many years. Reg Nicholson had served for several decades. R Whitelaw, J Atkins, A Borland, R Poynton, J McMurtrie, E Davis, E Preston, R Sharp and a host of others were there, year after year. In the fifties and sixties local man, Bruce Andrew, spent many years on the committee and was actively involved, supervising the Dodgem Cars during many carnivals. Earlier he had played in Collingwood’s 1928 premiership team and been a noted football administrator and journalist.

During the fifties Mordialloc Carnival continued to operate from Christmas to Easter with its usual attractions. But the general community, Mordialloc included, was beginning to undergo changes that would make the simple pleasures of the annual funfair seem out of date for many people. The old idea of an opening procession with decorated vehicles and folk in fancy dress had long gone. But other things put the whole enterprise at risk. After 1956 TV became the new medium that took Melbourne by storm, putting many cinemas out of business and keeping people indoors during evening viewing time. The small screen seemed more exciting than a carnival. The fifties also saw a huge rise in car ownership, making it possible for many folk to travel to distant holiday resorts in summer. Society was becoming more sophisticated, or many people thought it was, and a carnival was, perhaps, considered old hat. For instance ballroom dancing had been so popular in the pre-war days that the Jazz Palais was always crowded as couples paid their sixpence for each dance. This changed as music styles altered and formal dancing ceased to have its old appeal, so in the sixties the Palais was shut down. It became more difficult to attract the large attendances that had made the Mordialloc Carnival so remarkable. The committee worked hard to counter these difficulties. Back in 1950 Harry Luscombe, a local artist, painted many of the buildings and did attractive signwriting to lure the crowds. Lighting and amplified sound were improved. New Dodgem Cars were purchased from Nottingham, UK, in 1960. The committee organised a deal with GTV Channel 9 to run a Princess Pageant during the sixties. The TV channel wished to promote the soft drinks of Tarax, one of its advertisers. Girls of 14 years and under could enter and the selected finalists would parade for judging at the end of January. The winning Tarax Princess, named by the Lady Mayoress, would receive prizes presented by a TV personality from Channel 9. Ron Blaskett and Gerry Gee came along as did Happy Hammond and other stars. Many other people received prizes donated by local businesses. Despite this innovative move the show began to lose its appeal. From 1961 the carnival ran on Saturdays only after Australia Day, and finished on Labour Day. In 1967 the committee voted to discontinue the carnival after the 1968 summer fair was over, putting an end to 45 years of operation. There was little publicity given to this, just a short note in the Standard News that the carnival was winding up for the last time. The committee simply said it was due to lack of public support.

As the popular song said, the carnival was really over, and with it went the most successful cooperative, volunteer community effort the town has seen. Hundreds of people had come together for nearly half a century and, group by group, they had raised over $500,000 for funding a range of organisations, schemes and community needs. The whole enterprise was run by volunteers and brought a community together in a way no other club or group could have done. For many years the carnival committee and workers had run their own off-season social functions, including picnics to places such as Ferny Creek and Red Hill, indicating the cohesive effect the carnival had on the town. In a wider sense there would be few people in the suburbs near to Mordialloc who did not experience the magic of a day at that creekside fair during the years of its existence. Since 1968 there have been several one-off carnivals for short periods, and they still attract crowds, but none of them match the longevity and the atmosphere of the old Mordialloc Carnival. 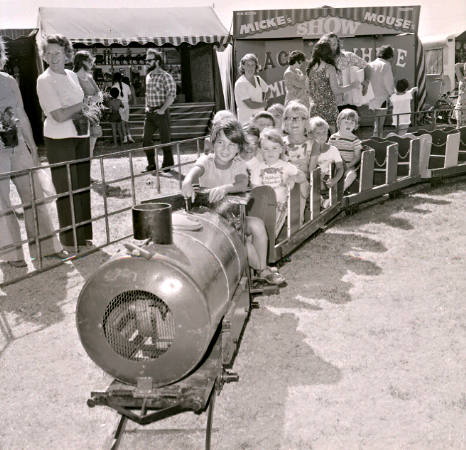