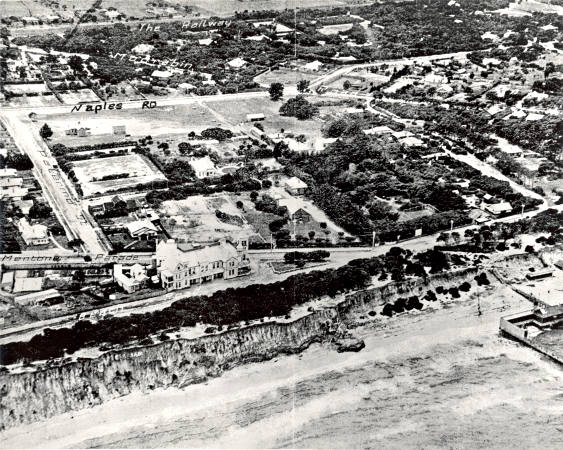 Everyone uses street names regularly, if not daily. Where we live, our street, becomes part of us. It is interesting to examine the street names in our locality and how they were chosen. There does not seem to be any formula for naming streets, but many have their origin in local history and in the lives of people who once lived in the area. Mentone has some thoroughfares with fascinating origins.

Contrary to the urban myth that Italians were numerous residents in Mentone’s early days and gave the streets names from their native land, there were very few people from the Mediterranean countries among Mentone’s early settlers. The Italian atmosphere was created purposefully in the early 1880s, just after the railway reached the open land we now call ‘Mentone’, the half way mark on the Frankston line built in 1881-2. Matthew Davies, a solicitor and Victorian parliamentarian, bought Alexander Balcombe’s cattle paddocks that covered what is now Mentone in the early 1880s and planned a seaside resort town where he could make money by selling land to Melbourne’s well-to-do, aspirational class of that era. Davies needed a catch- cry to interest the land buyers. He decided to sideline the Dover Slopes name that the area had worn loosely because of the sea cliffs; he also ditched Balcombe, used by the railways to name the station in 1881. By 1884 the station and the town became Mentone. Davies had decided that his resort town would be ‘The New Riviera of the South’. He used this and other similar tag lines to tempt the potential land buyers. His little village was named after Menton, on the French-Italian Riviera coast, and Davies gave Italian names to the streets in his subdivided new town that at this time was mere paddocks and scrub. From the railway to the beach, the main selling section at first, the streets carry names of major Italian cities: Milan, Florence, Naples, Venice and Brindisi. Outside this area there are many more examples, some of which are somewhat obscure in origin. Hence you can find: Cremona, Palermo, Genoa, Catania, Rivoli, Ancona, Latona, Remo, Savona, Sarzana, Cervara, Albenca, Levanto, Avenza, Riviera, Conti, Voltri, Eblana and, of course, Como Parade and Lucerne Street named after European lakes. As the Parkdale area became settled there were a few more Riviera names, mainly from near the French border. Monaco, Antibes, Alameda and The Corso are examples. 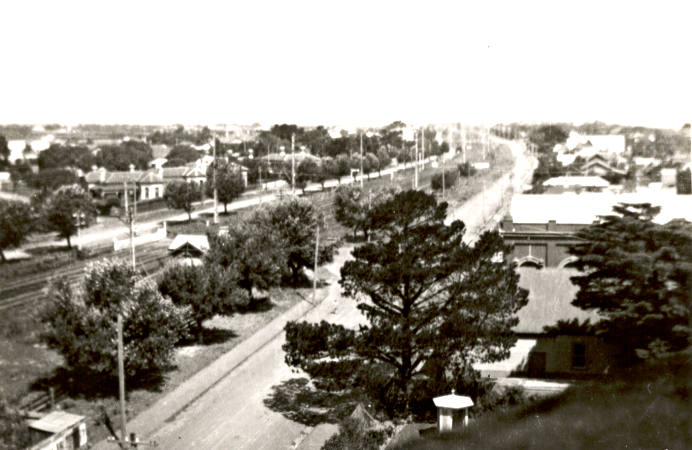 During the late 1880s the land boom took off and Mentone thrived, but by 1892 a severe economic collapse ruined banks and speculators. Davies and his backers were among those made bankrupt. But the Mentone street names have lived on for over a century, reminding us of the town’s colourful and optimistic founder whose dreams of a plush Riviera-style resort never quite came to reality.

Alexander Balcombe was a grazier who built a homestead called The Briars near present-day Mornington where he had settled on a large cattle run in 1843. Balcombe’s father was employed by the East India Company and the British Government as an administrator on the island, St Helena, and Alexander was born there in 1811. As a young child he knew Napoleon Bonaparte who was exiled on St Helena from 1815 till 1821. The famous Frenchman used to play games with the Balcombe children while he filled in time during his exile. The Balcombes left St Helena and migrated to NSW in 1823 and by the early 1840s Alexander had married and moved to the new colony being settled around Port Phillip Bay. Balcombe’s cattle business grew and he bought paddocks in what is now central Mentone in the early 1850s, the aim being to fatten stock en route from Mornington to the Melbourne markets. The cattle reached these ‘Mentone’ paddocks along a track off the rough road that is now Nepean Highway. This track naturally became known as Balcombe’s track and later Balcombe Road which led to what became the town of Mentone, named by Davies in 1884.

In the early 1850s Stephen Charman became one of the first white settlers in the district. His property stretched into present-day Beaumaris on the north and west of the Balcombe Road-Charman Road intersection. He and his wife belonged to the Wesleyan (Methodist) Church and donated a portion of their land in Balcombe Road as a site for a church, known as the Zion Chapel. From about 1855 until 1865 over one hundred burials took place near the chapel (about where Bickford Court is now). Eventually the Charmans and the Methodist Church in Balcombe Road moved to other places, but the road from Cheltenham to the beach became Charman Road, honouring the family that were the first regular travellers on it a century and a half ago. 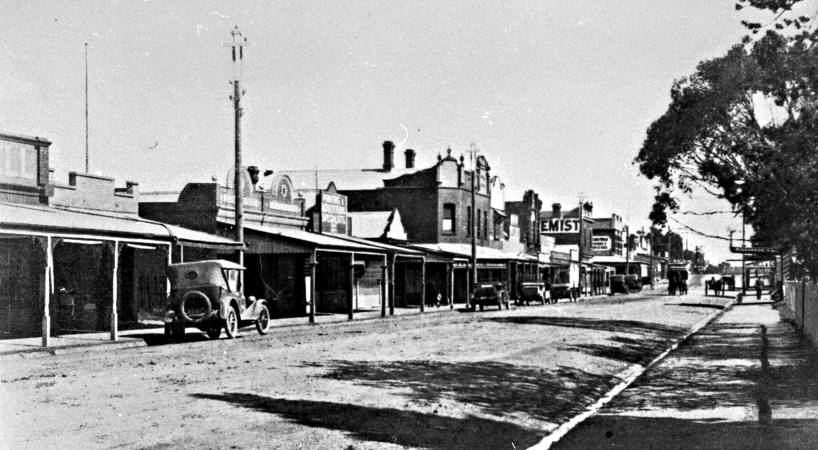 This street runs through the site of the early property Samuel Mundy settled on in 1853. Samuel came to Australia from Oxfordshire after his brother wrote to him from his Lower Plenty farm describing the prospects in Victoria as extremely favourable. Mundy went to the gold rushes but soon settled down on his property that stretched from Balcombe Road to the beach, and from a line near the present Mentone Girls’ Secondary College to a point near Plummer Road. He and his wife worked tirelessly to create a magnificent market garden with neat rows of hedges separating the paddocks. Samuel Mundy became a representative on the early Moorabbin Shire Council and had sharp disputes with the authoritarian Tommy Bent on occasions. His importance in early Mentone was underlined by the fact that the beach opposite his property was for a time known as ‘Mundy’s Beach’. Samuel Mundy’s wife, Mary, died in 1885 and he later married Sarah Gouldthorpe, the daughter of George Gouldthorpe, who had settled in Swanston Street near the present-day railway route. Samuel’s first marriage had been childless, but Sarah gave him two daughters as he neared his seventies. Mundy died in 1903 aged 78. After World War 1 Mundy’s old farm eventually became housing estates with a street bearing his name running through the sub-divisions from Balcombe Road to Beach Road.

Near Mundy’s old estate another gardener called Edward Plummer settled close to Balcombe Road for a period in the 1870s and 1880s. Little is known about him but relatives of his remained there until after 1900. The street connecting Balcombe and Beach Roads and bearing his name was gazetted well before the nearby parallel thoroughfare, Mundy Street.

George Gouldthorpe came to the district in 1869-70 and built in what became Swanston Street before the railway went through. His land stretched back to the railway route and in 1880-1 George had to sell part of it to the railway authorities when the line went through. His house was next door to Samuel Judd who had a large family, mainly boys. Judd also had a street named after him but it is in Cheltenham. Gouldthorpe also had several sons, some of whom were in Mentone’s early cricket and football teams. George had plots of land in several other local areas where he operated as a market gardener, and later had his sons working them. One large block was in Parkers Road, Parkdale, near the later site of the railway station. Another section of his farming enterprise took in an area near the current Warrigal Road-Nepean Highway intersection. It is here that a small avenue bearing the Gouldthorpe name runs from Warrigal Road to the Highway.

William Blackwood was a farrier who operated a forge in Balcombe Road, on the southern side a few doors from the present-day Nepean Highway. He began there in the 1880s. His blacksmith shop building remained there for many years. Mitchell bought Blackwood out in 1916 and after he retired the place became increasingly derelict, leaning precariously until it finally disappeared around 1960. Blackwood lived near where the avenue bearing his name is located. From 1888 till 1948 the Mentone Racecourse operated near his residence with regular Saturday meetings. As a farrier he would have been busy, and appreciative of the horse-racing industry that was a big feature of Mentone in his time. 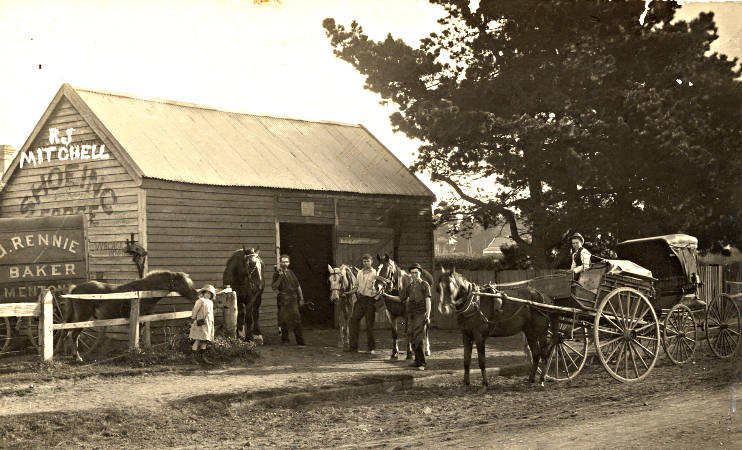 This name is now unfamiliar to most people, but it was the early name given to the stretch of present-day Warrigal Road, from its T-intersection at Beach Road in the south to a point north of Kingston Road from where it became Warrigal Road to its northern extremity. The earlier name for the southern section probably came from the fact that to reach Moorabbin, which was a very large area of countryside stretching out towards Heatherton, the southern settlers used a track that we now call Warrigal Road. For instance, those coming from Mordialloc in the late 19th century probably found it better to turn up ‘Moorabbin Road’ to reach parts of Moorabbin than to go along the present-day Nepean Highway route. The name ‘Moorabbin Road’ was discontinued after the late 1940s. At that time it was decided to make the whole route ‘Warrigal Road’, from Canterbury Road in the north to Beach Road in the south. 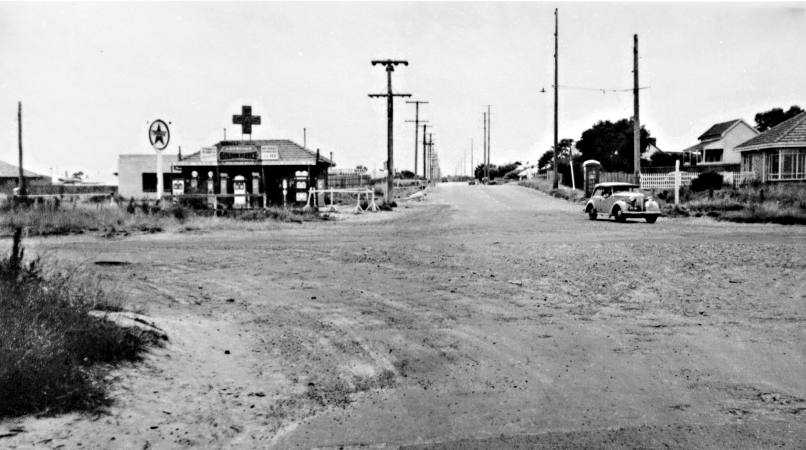 When the first settlers in Melbourne travelled this route the end point was the small settlement at present-day Mornington, then known for a brief period as Snapper Point. Fish caught in the bay near Snapper Point were transferred to Melbourne along a track referred to as ‘Snapper Point Road’ for a brief time. A jetty was built at Snapper Point in 1857 and the town soon became ‘Mornington’. Eventually travellers and settlers went further down the peninsula, even to Point Nepean which was named after a British MP and colonial administrator of the period around 1800 after Flinders, Murray and others had explored that coast. The McCraes settled near Arthurs Seat in the 1840s, and by the 1850s a rough road called ‘Arthurs Seat Road’ was constructed to connect with Melbourne. Later in the century the track went all the way to the end of the Mornington Peninsula and it became ‘Point Nepean Road’. The name ‘Point Nepean Road’, a bit of a mouthful, was altered to ‘Nepean Highway’ in 1948, even though it was a strange set-up with three lanes. The middle one had been created for passing! This ‘highway’ during the 1940s and 1950s was nicknamed ‘homicidal highway’ by the local Standard News of the day because of the horrendous crashes that occurred regularly, with many deaths.

More than a century ago Walter Thurling built a large timber residence facing Plummer Road next to the small street that eventually carried his name. Reportedly, Thurling’s wife wanted to live near to the city and not in the country, so Walter chose this site and the house was built in 1892. Walter Thurling, a city businessman, became a prominent Mentone identity. He was involved in community affairs and was a member of the Mentone Bowling Club where his name was often in the list of successful competitors in club events. In 1994 Thurling’s old house was demolished, but only after a rather bitter protest from local residents who opposed the move to build units on the large block.

It is quite odd that Matthew Davies, the founder of Mentone, has only a very small street named after him. It runs from Balcombe Road to Florence Street, with Woolworths car parks taking up a large part of the eastern side.