Beginnings of Cheltenham No84 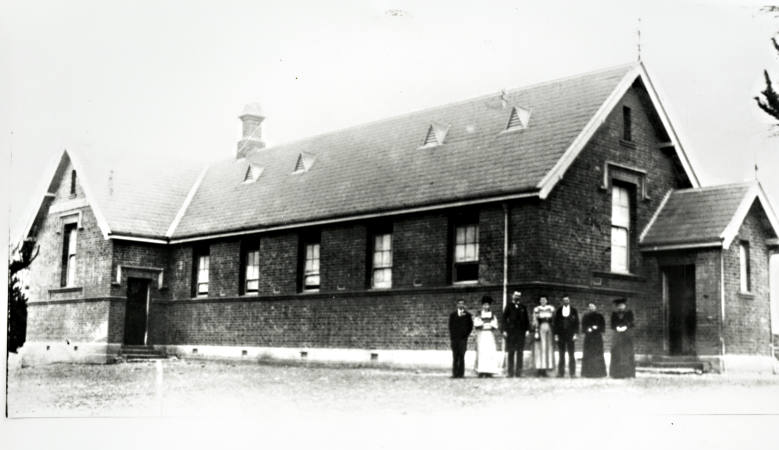 The Cheltenham Primary School in Charman Road was known as the Beaumaris Common School No 84 until the end of 1884 when its name was changed to Cheltenham. This school in Charman Road was built in 1869 as a result of an amalgamation or at least a forced closure. There were two schools involved in the events leading to the building of the school. One was opened under the auspices of the Church of England on October 1, 1854 in an area east of Point Nepean Road and north of Centre Dandenong Road. [1] The second school, under the control of the Denominational Board, was a Wesleyan school which commenced on 1 July 1855. [2] It was known as the Beaumaris Wesleyan School. This school, a wooden building with a shingle roof, was located on privately owned land described as being ‘low and swampy’ to the west of Point Nepean Road and approximately one mile south of the Cheltenham township in what is now called Latrobe Street. In 1855 the school had an enrolment of 36 pupils but the Denominational Board Report for that year shows it had an average attendance of 22.

In October 1866 the Correspondent of the Local Committee of the Beaumaris school wrote to the Board of Education requesting assistance in providing more accommodation because of increasing enrolments. As the community could not raise sufficient funds to meet the costs it was proposed that an amalgamation of their school with that of Cheltenham should occur and that a new building be erected on a new site. So began a battle that went on for several years.

The Reverend Samuel Taylor wrote to the Secretary of the Board on 15 January 1867 informing him that ‘the opinion of both committees was decidedly, & to a man, adverse to the proposed amalgamation.’ Amongst the reasons Taylor gave for the Cheltenham committee’s decision were that ‘They are persuaded that such amalgamation would be decidedly injurious to the religious well being of the children of the locality through the watchful jealousy of rival sects’ and that ‘the erection of a school building on an intermediate site, would be prejudicial rather than advantageous to the neighbourhood, in an educational point of view, on account of the very tender age of the majority of the children in attendance at both schools … so that the increased distance would virtually shut out from education the majority of the children now in attendance at one school or the other …’ Taylor went on in his correspondence to point out ‘in as much as in a poor agricultural district as this is, the services of the children to their parents becomes too valuable, when once the children attain the age of 9 years, to allow of their longer continuance at school.’

Given the reported opposition to an amalgamation, Inspector Sasse was asked by the Board to recommend a new site for Beaumaris School No 84. He suggested the new site should be in Balcombe Road, between Cromer and Charman roads. He discounted the idea of a proposed location in Charman Road because it was ‘about a third of a mile nearer the Cheltenham School than the present site.

The Beaumaris group were divided on the question of location. Henry Wells, the correspondent for the Beaumaris committee, wrote in January 1868 to the Secretary of the Department informing him that the committee had appointed two members to select a suitable piece of land in Balcombe Road but their recommendation was not supported by the group. Some committee members, without the knowledge of their colleagues, called a meeting and the views expressed at that meeting were put forward in a petition to the Education Board. The petition signed by forty parents and written by Walter Meeres in a copperplate hand pointed out that they did not object to the union of the two schools provided that the building was ‘not removed too far from the habitations of the children now attending Beaumaris School.’ They went on to say that they believed the ‘Government Reserve site in Charman Road was the most eligible situation’ although they acknowledged the Cheltenham people had not been consulted. Nevertheless they thought that ‘the opposition to amalgamation lately expressed by the Cheltenham people may presently subside.’ Consequently they earnestly requested the Board to consider the advantages of the Charman Road site before ‘finally deciding that the school shall not be built there.’ 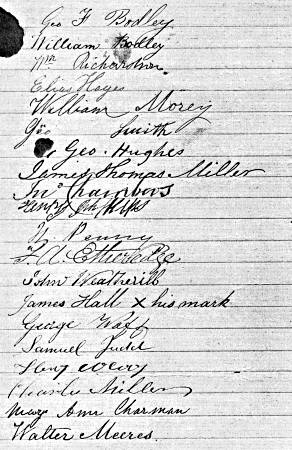 In the other camp the Rev Samuel Taylor who inadvertently was sent a letter meant for Henry Wells, the correspondent of the Beaumaris committee expressed a different view. In returning the letter he took the opportunity to remind the Board of the opposition of the Cheltenham community to the amalgamation and expressed the view that if the location of the Wesleyan school was to change ‘… it should be removed even further South than the present one…’ with the thought probably being that the further away the Beaumaris school was located the less the threat to the existence of the Cheltenham school.

Without clear agreement between the parties the Board referred the matter to Richard Budd, the Inspector General. He noted that ‘…the Cheltenham people opposed the amalgamation on the grounds that the religious difference in the neighbourhood preclude any religious instruction being given in the amalgamated school, and also that the distance to such a school would be too great for a number of the children. The Beaumaris people had no objection to the amalgamation provided that the school was built on their preferred site.’ At the time no religious instruction was given in the Beaumaris school and Budd believed the parents would oppose it being given in the amalgamated school should it be built. 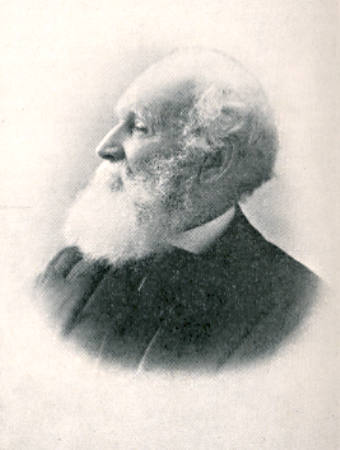 In true bureaucratic fashion Budd made his recommendations. ‘I have no hesitation in advising the Board not to expend public money in building except on a central site suitable for both populations. If the parties will not amalgamate of course there will be a difficulty in raising the local funds, especially from the Cheltenham people who have a very fair schoolroom. If the Beaumaris people refuse to amalgamate on a proper site (some probably will unless on the proposed site) they may be left to provide a proper building at their own expense upon their old site. This will probably bring the non religious party to terms, and an amalgamation may be effected. At present I advise the Board to refuse aid except to a school on a site suitable for both the populations of Cheltenham and Beaumaris. If the Beaumaris people choose to erect a schoolroom on such a site without aid from Cheltenham let them do so. But if they do the Board ought eventually to withdraw aid from the Cheltenham School.’

The Beaumaris group, now with Thomas Rose as their correspondent, continued to press their case for a new school pointing to the unsuitable and dilapidated state of their current building and to ask the Board to continue with the provision of grants or aid to pay the teacher. Rose expressed the willingness of the Beaumaris people to amalgamate on any spot that was fairly central to the two populations and would accept ‘cheerfully’ the decision of the local District Inspector. With the perceived inactivity of the Board the Beaumaris group sought the assistance of their local member of parliament who subsequently reported the matter was to be investigated by Inspector Brown.

As a result of Brown’s report the Board decided that the Cheltenham committee be informed that the ‘Board deed it inexpedient to maintain two schools so near to each other as Cheltenham and Beaumaris and unless they are willing to amalgamate with Beaumaris aid will be withdrawn.’ Kane, the secretary to the Board, noted on the file, ‘The site the Board approves of is in the Charman Road near the Cemetery … No payment to be made to 127 school for any period beyond 31 December.’ This was a contradiction of an earlier decision communicated to the Cheltenham Committee that as long as they maintained their pupil numbers they would continue to be supported.

The Cheltenham community was not happy with the new decision. The Rev William Singleton, the newly appointed vicar of the new Anglican parish of St Matthew’s wrote to the Board ‘the Committee of the Cheltenham School refuse to amalgamate on any terms, this school with Beaumaris, since they consider the amalgamation would be prejudicial to the interest of the former; and informed the members of the Board that a meeting had been called of all those interested in the school ‘to test their opinion.’ At the meeting the motion was carried that ‘the Government grant had been unjustly withdrawn … the average attendance of children being maintained. And it was further resolved that if the grant is still withheld, sooner than amalgamate with the Beaumaris school, we the undersigned Parents and others pledge ourselves to support school 127 as a private one.’ The petition, concluded in a more conciliatory tone ‘… we respectfully ask the Board of Education to restore the grant to School 127 without prejudice.’ But this was not to be. The school with 70 to 80 pupils continued as a private enterprise under Miss Gott for a further two years when it was abandoned because of the dilapidated state of the building. 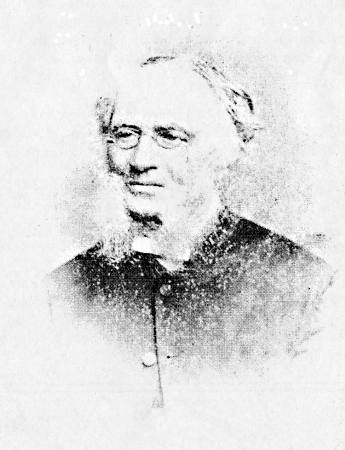 The Beaumaris school moved to its new site in Charman Road, next to the cemetery, in 1869. Originally the building was to be of wood with the Education board providing the land and the local community the money for the building. The Board recommended to the committee that they should build in brick and if they did so the Board would match costs pound for pound. The committee took up this suggestion and the two room building was completed by 13 September 1869 at a cost of two hundred pounds one shilling and two pence. 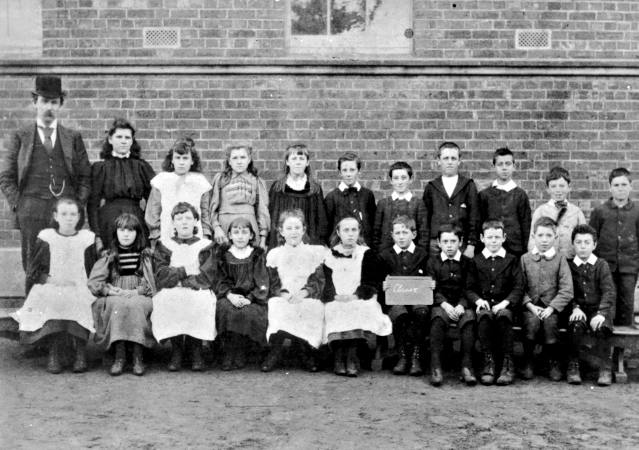 Early photograph of a group of pupils from Cheltenham State School with their teacher., 1898. Courtesy Len Allnutt, Kingston Collection.