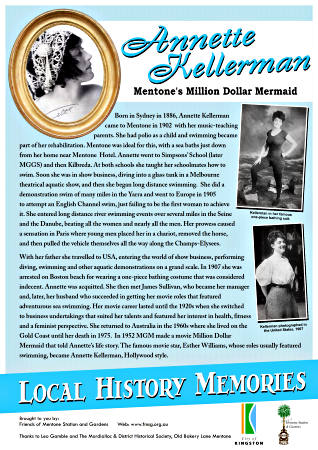 Born in Sydney in 1886, Annette Kellerman came to Mentone in 1902 with her music-teaching parents. She had polio as a child and swimming became part of her rehabilitation. Mentone was ideal for this, with a sea baths just down from her home near Mentone Hotel. Annette went to Simpsons’ School (later MGGS) and then Kilbreda. At both schools she taught her schoolmates how to swim. Soon she was in show business, diving into a glass tank in a Melbourne theatrical aquatic show, and then she began long distance swimming. She did a demonstration swim of many miles in the Yarra and went to Europe in 1905 to attempt an English Channel swim, just failing to be the first woman to achieve it. She entered long distance river swimming events over several miles in the Seine and the Danube, beating all the women and nearly all the men. Her prowess caused a sensation in Paris where young men placed her in a chariot, removed the horse, and then pulled the vehicle themselves all the way along the Champs-Elysees.

With her father she travelled to USA, entering the world of show business, performing diving, swimming and other aquatic demonstrations on a grand scale. In 1907 she was arrested on Boston beach for wearing a one-piece bathing costume that was considered indecent. Annette was acquitted. She then met James Sullivan, who became her manager and, later, her husband who succeeded in getting her movie roles that featured adventurous sea swimming. Her movie career lasted until the 1920s when she switched to business undertakings that suited her talents and featured her interest in health, fitness and a feminist perspective. She returned to Australia in the 1960s where she lived on the Gold Coast until her death in 1975. In 1952 MGM made a movie Million Dollar Mermaid that told Annette’s life story. The famous movie star, Esther Williams, whose roles usually featured swimming, became Annette Kellerman, Hollywood style.