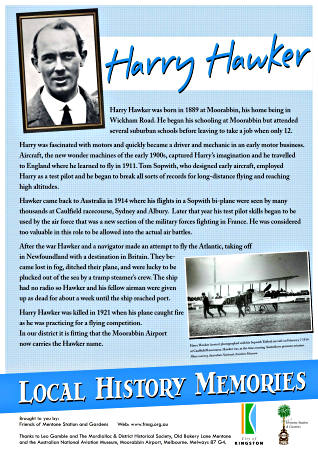 Harry Hawker was born in 1889 at Moorabbin, his home being in Wickham Road. He began his schooling at Moorabbin but attended several suburban schools before leaving to take a job when only 12.

Harry was fascinated with motors and quickly became a driver and mechanic in an early motor business. Aircraft, the new wonder machines of the early 1900s, captured Harry’s imagination and he travelled to England where he learned to fly in 1911. Tom Sopwith, who designed early aircraft, employed Harry as a test pilot and he began to break all sorts of records for long-distance flying and reaching high altitudes.

Hawker came back to Australia in 1914 where his flights in a Sopwith bi-plane were seen by many thousands at Caulfield racecourse, Sydney and Albury. Later that year his test pilot skills began to be used by the air force that was a new section of the military forces fighting in France. He was considered too valuable in this role to be allowed into the actual air battles.

After the war Hawker and a navigator made an attempt to fly the Atlantic, taking off in Newfoundland with a destination in Britain. They became lost in fog, ditched their plane, and were lucky to be plucked out of the sea by a tramp steamer’s crew. The ship had no radio so Hawker and his fellow airman were given up as dead for about a week until the ship reached port.

Harry Hawker was killed in 1921 when his plane caught fire as he was practicing for a flying competition. In our district it is fitting that the Moorabbin Airport now carries the Hawker name.