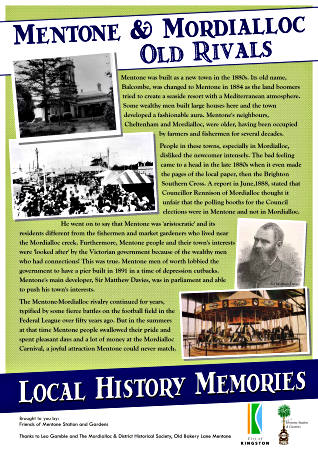 Mentone was built as a new town in the 1880s. Its old name, Balcombe, was changed to Mentone in 1884 as the land boomers tried to create a seaside resort with a Mediterranean atmosphere. Some wealthy men built large houses here and the town developed a fashionable aura. Mentone's neighbours, Cheltenham and Mordialloc, were older, having been occupied by farmers and fishermen for several decades.

People in these towns, especially in Mordialloc, disliked the newcomer intensely. The bad feeling came to a head in the late 1880s when it even made the pages of the local paper, then the Brighton Southern Cross. A report in June, 1888, stated that Councillor Rennison of Mordialloc thought it unfair that the polling booths for the Council elections were in Mentone and not in Mordialloc. He went on to say that Mentone was 'aristocratic' and its residents different from the fishermen and market gardeners who lived near the Mordialloc creek. Furthermore, Mentone people and their town's interests were 'looked after' by the Victorian government because of the wealthy men who had connections! This was true. Mentone men of worth lobbied the government to have a pier built in 1891 in a time of depression cutbacks. Mentone's main developer, Sir Matthew Davies, was in parliament and able to push his town's interests.

The Mentone-Mordialloc rivalry continued for years, typified by some fierce battles on the football field in the Federal League over fifty years ago. But in the summers at that time Mentone people swallowed their pride and spent pleasant days and a lot of money at the Mordialloc Carnival, a joyful attraction Mentone could never match.