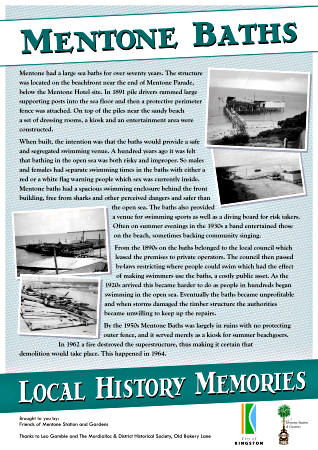 Mentone had a large sea baths for over seventy years. The structure was located on the beachfront near the end of Mentone Parade, below the Mentone Hotel site. In 1891 pile drivers rammed large supporting posts into the sea floor and then a protective perimeter fence was attached. On top of the piles near the sandy beach a set of dressing rooms, a kiosk and an entertainment area were constructed.

When built, the intention was that the baths would provide a safe and segregated swimming venue. A hundred years ago it was felt that bathing in the open sea was both risky and improper. So males and females had separate swimming times in the baths with either a red or a white flag warning people which sex was currently inside. Mentone baths had a spacious swimming enclosure behind the front building, free from sharks and other perceived dangers and safer than the open sea. The baths also provided a venue for swimming sports as well as a diving board for risk takers. Often on summer evenings in the 1930s a band entertained those on the beach, sometimes backing community singing.

From the 1890s on the baths belonged to the local council which leased the premises to private operators. The council then passed by-laws restricting where people could swim which had the effect of making swimmers use the baths, a costly public asset. As the 1920s arrived this became harder to do as people in hundreds began swimming in the open sea. Eventually the baths became unprofitable and when storms damaged the timber structure the authorities became unwilling to keep up the repairs.

By the 1950s Mentone Baths was largely in ruins with no protecting outer fence, and it served merely as a kiosk for summer beachgoers. In 1962 a fire destroyed the superstructure, thus making it certain that demolition would take place. This happened in 1964.