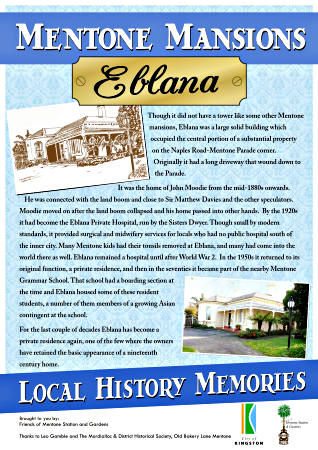 Though it did not have a tower like some other Mentone mansions, Eblana was a large solid building which occupied the central portion of a substantial property on the Naples Road-Mentone Parade corner. Originally it had a long driveway that wound down to the Parade.

It was the home of John Moodie from the mid-1880s onwards. He was connected with the land boom and close to Sir Matthew Davies and the other speculators. Moodie moved on after the land boom collapsed and his home passed into other hands. By the 1920s it had become the Eblana Private Hospital, run by the Sisters Dwyer. Though small by modern standards, it provided surgical and midwifery services for locals who had no public hospital south of the inner city. Many Mentone kids had their tonsils removed at Eblana, and many had come into the world there as well. Eblana remained a hospital until after World War 2. In the 1950s it returned to its original function, a private residence, and then in the seventies it became part of the nearby Mentone Grammar School. That school had a boarding section at the time and Eblana housed some of these resident students, a number of them members of a growing Asian contingent at the school.

For the last couple of decades Eblana has become a private residence again, one of the few where the owners have retained the basic appearance of a nineteenth century home.