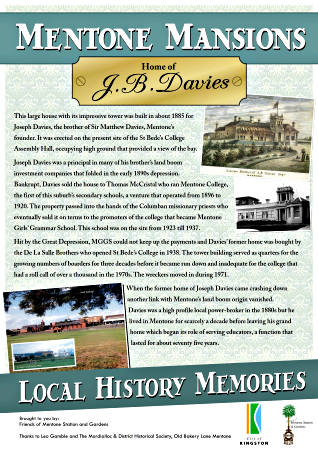 This large house with its impressive tower was built in about 1885 for Joseph Davies, the brother of Sir Matthew Davies, Mentone’s founder. It was erected on the present site of the St Bede’s College Assembly Hall, occupying high ground that provided a view of the bay.

Joseph Davies was a principal in many of his brother’s land boom investment companies that folded in the early 1890s depression. Bankrupt, Davies sold the house to Thomas McCristal who ran Mentone College, the first of this suburb’s secondary schools, a venture that operated from 1896 to 1920. The property passed into the hands of the Columban missionary priests who eventually sold it on terms to the promoters of the college that became Mentone Girls’ Grammar School. This school was on the site from 1923 till 1937.

Hit by the Great Depression, MGGS could not keep up the payments and Davies’ former home was bought by the De La Salle Brothers who opened St Bede’s College in 1938. The tower building served as quarters for the growing numbers of boarders for three decades before it became run down and inadequate for the college that had a roll call of over a thousand in the 1970s. The wreckers moved in during 1971.

When the former home of Joseph Davies came crashing down another link with Mentone’s land boom origin vanished. Davies was a high profile local power-broker in the 1880s but he lived in Mentone for scarcely a decade before leaving his grand home which began its role of serving educators, a function that lasted for about seventy five years.