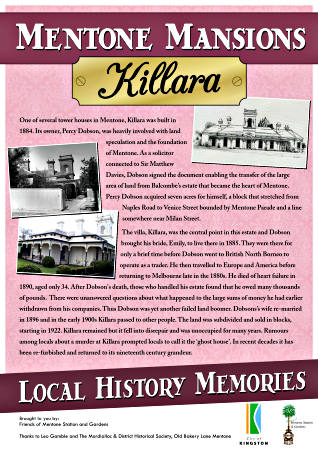 One of several tower houses in Mentone, Killara was built in 1884. Its owner, Percy Dobson, was heavily involved with land speculation and the foundation of Mentone. As a solicitor connected to Sir Matthew Davies, Dobson signed the document enabling the transfer of the large area of land from Balcombe’s estate that became the heart of Mentone. Percy Dobson acquired seven acres for himself, a block that stretched from Naples Road to Venice Street bounded by Mentone Parade and a line somewhere near Milan Street.

The villa, Killara, was the central point in this estate and Dobson brought his bride, Emily, to live there in 1885. They were there for only a brief time before Dobson went to British North Borneo to operate as a trader. He then travelled to Europe and America before returning to Melbourne late in the 1880s. He died of heart failure in 1890, aged only 34. After Dobson's death, those who handled his estate found that he owed many thousands of pounds. There were unanswered questions about what happened to the large sums of money he had earlier withdrawn from his companies. Thus Dobson was yet another failed land boomer. Dobsons’s wife re-married in 1896 and in the early 1900s Killara passed to other people. The land was subdivided and sold in blocks, starting in 1922. Killara remained but it fell into disrepair and was unoccupied for many years. Rumours among locals about a murder at Killara prompted locals to call it the ‘ghost house’. In recent decades it has been re-furbished and returned to its nineteenth century grandeur.